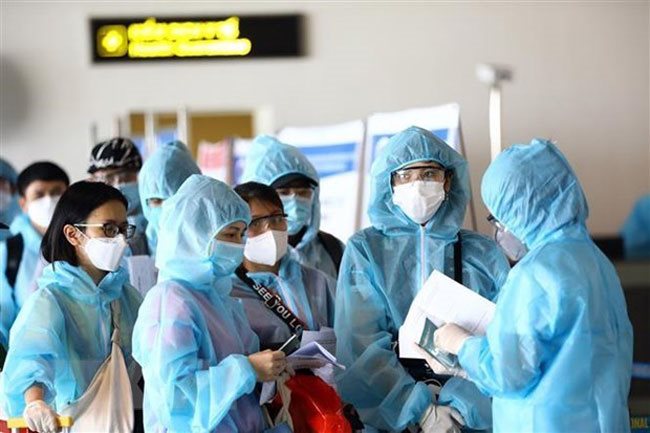 Vietnamese citizens are seen returning to Vietnam on repatriation flights. Only citizens with urgent needs will be considered for repatriation – PHOTO: VNA

At a press briefing of the Ministry of Foreign Affairs on January 14, Hang said repatriation flights would be conducted depending on the Covid-19 situation and the country’s quarantine capacity, the local media reported.

Many Vietnamese citizens abroad have registered to come back to Vietnam before the Lunar New Year holiday, or Tet, the spokeswoman noted.

Under the prime minister’s direction, Vietnam’s foreign affairs agencies have coordinated with the competent agencies in foreign countries and airlines to operate nearly 300 safe flights to bring home more than 80,000 Vietnamese citizens from 60 countries and territories.

However, due to the appearance of a new coronavirus variant which is highly infectious in some countries, Prime Minister Nguyen Xuan Phuc on January 5 decided to restrict repatriation flights until the Lunar New Year.

Only in case of special circumstances will the flights be considered by the Ministries of Health, Foreign Affairs, National Defense, Public Security and Transport, and reported to the Government leader for approval, Hang said.

At the press briefing, Hang also answered questions about the trial of Vietnam’s Covid-19 vaccine, Nanocovax, on people and its effectiveness over the new coronavirus variant, saying that the Vietnamese Government, besides focusing on combating the pandemic, has directed the relevant agencies to create favorable conditions for the research and production of Covid-19 vaccines.

On January 12, the Vietnam Military Medical Academy, under the Ministry of Health, started the trial injection of Nanocovax with the highest dosage of 75 micrograms on three people.

The trial was in line with regulations on the process and safety of the World Health Organization and relevant international agencies.

According to the Ministry of Health, the vaccine has been produced by using the recombinant protein technology and no evidence has shown that new coronavirus variants can resist the vaccine, Hang said, adding that in reality, Nanocovax needs more time to prove its effectiveness.