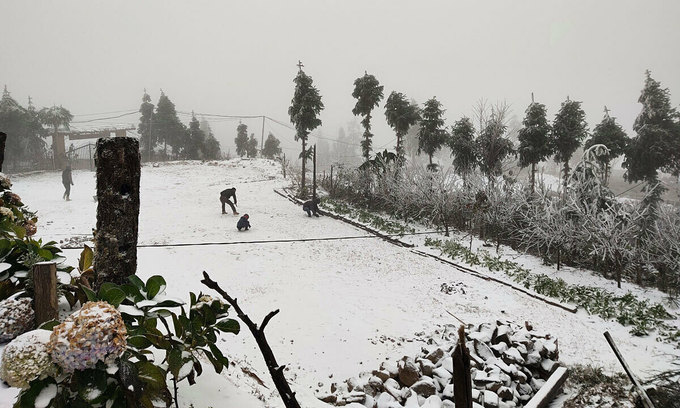 Many Vietnamese have been drawn to the northern highlands, including Sa Pa, as thick white snow blanketed the region.

At a height of 1,500 meters above sea level, Sa Pa has recorded temperatures dropping to minus one degree Celsius on Monday and in Sin Ho mountainous district of Lai Chau, to minus two degrees Celsius.

The northern region has entered the fifth day of a cold snap resulting from a strong cold front, expected to last until Wednesday.

Pham Ngoc Tuan, a resident in O Quy Ho, said snow started falling more heavily Monday morning, forming a 1-3 centimeter layer from the middle of the pass to its top.

Over the past days, many tourists have been flocking to northern mountainous regions like Sa Pa, Y Ty and O Quy Ho to admire the unusual bout of frost and snow.

But the northern highlands have received frost and snow every winter in recent years.

According to the National Center for Hydro-Meteorological Forecasting, the northern region would switch to dry cold weather from Tuesday.

Vietnam has experienced a colder winter than usual this year as the Pacific Ocean sea surface temperature drops, forming the La Niña phenomenon, weather experts said. The country should expect up to 27 waves of cold air coming from the north this winter, a typical average.