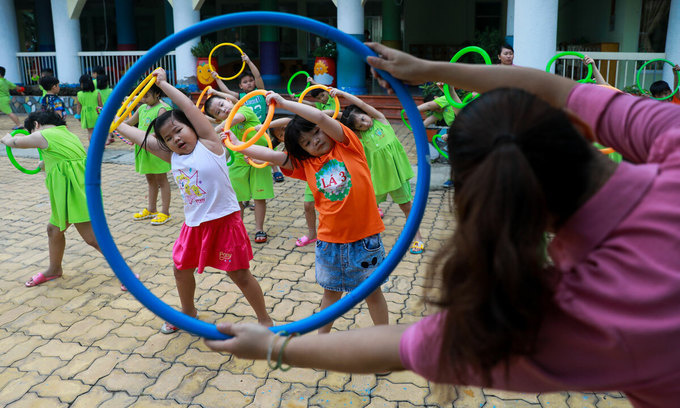 The Government Office on Monday requested the Ministry of Labor, Invalids and Social Affairs to look into a proposal by the labor general confederation last year to classify kindergarten and PE teachers as practitioners of arduous and dangerous labor.

If approved, male and female teachers may retire at 57 and 55, respectively, five years earlier than usual.

Ho Thi Kim Ngan, deputy head of the relations department under the general confederation, said 96 percent of respondents in a survey among teachers and officials said female kindergarten teachers should be allowed to retire at 55. A total 93 percent said female PE teachers should retire at this age too, she added.

Teaching kindergarteners requires specialized skills, including dancing, singing, and storytelling, etc. It also entails teachers ensuring both educational quality and learner health and safety, the proposal said. Work hours typically range from nine to 10 hours a day with no overtime pay, it said.

“The intense workload and burden of keeping students safe can cause chronic stress, which undermines the health of kindergarten teachers,” said Ngan, adding a lower retirement age would also keep the workforce young.

Vietnam’s education field is facing a long-standing issue of kindergarten teacher shortage, with 45,000 currently missing from its workforce, Minister of Education and Training Phung Xuan Nha said at a meeting last month. In 2018, the country lacked over 43,700 kindergarten teachers, according to the education ministry.

Around three million workers in the country are employed in around 1,800 jobs and fields considered arduous, hazardous and dangerous, including oil and gas operators, athletes and chemists. Those who have worked for 15 years in said jobs may retire no more than five years earlier than usual.