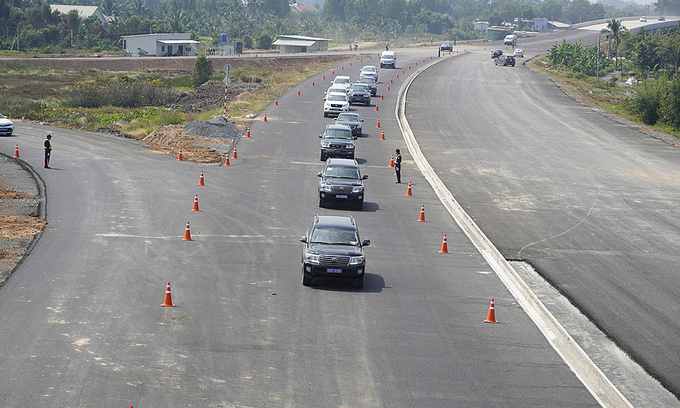 Work on the extended section, called the My Thuan-Can Tho Expressway, started Monday at Thuan An Commune in Binh Minh Town, Vinh Long Province.

Invested in by the Ministry of Transport and managed by the state-owned Cuu Long Corporation for Investment Development and Project Management of Infrastructure, the VND4.8 trillion ($207.33 million) section will run 23 km (14 miles) – 13 km in Vinh Long and the remaining 10 km in Dong Thap Province.

The section will end at the Cha Va Bridge that links with National Highway 1A, from where vehicles will only need to pass the Can Tho Bridge to get into Can Tho City, the heart of the Mekong Delta.

The final section will be connected with the Trung Luong-My Thuan Expressway, an extension of the HCMC-Trung Luong Expressway.

Together, the Trung Luong-Can Tho Expressway will run 120 km from HCMC to Can Tho, halving travel time from the current four hours to just two.

The HCMC-Trung Luong Expressway, running from HCMC to Tien Giang Province, has been in use since February 2010; while the Trung Luong-My Thuan section, which runs across Tien Giang to near Vinh Long Province, will partially open to traffic this Lunar New Year, which peaks on February 12, and be completed to be put into service by the year end.

The detailed plan to build the My Thuan-Can Tho section was approved by the prime minister back in 2010 but suffered many delays subsequently.

“The investment format for this section was shifted from build-operate-transfer to public investment in April to ease the financial burden on Mekong Delta provinces,” PM Nguyen Xuan Phuc said at the event to launch the project.

For now, National Highways 1A and 50 are the main links between HCMC and the delta, which is home to around 20 million people, or a fifth of Vietnam’s population, and for over a decade, the HCMC-Trung Luong Expressway has been the only expressway connecting the city and the region.