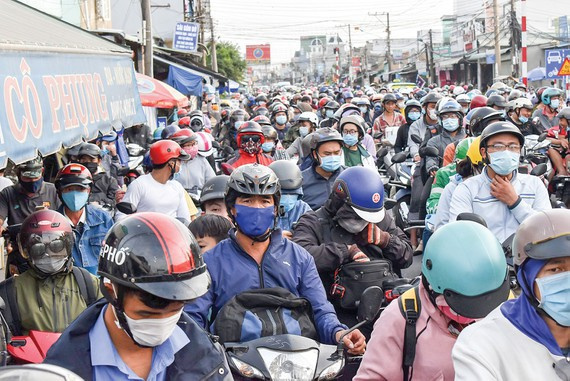 Passenger buses from travel destinations were queuing on the way towards Mien Dong Bus Station; mostly from Phan Thiet City in the south-central province of Binh Thuan; therefore, bus tickets were sold out in the day before yesterday. Long lines of thousands of vehicles and people were seen in the Cat Lai ferry connecting the Southern Province of Dong Nai and Ho Chi Minh City. To reduce pressure, employees of the ferry went out of their booth to sell tickets to people. Similarly, traffic in the section connecting HCMC- Long Thanh – Dau Giay expressway and An Phu intersection, in the National Highway No.13, Dinh Bo Linh Street ( in front of the old Mien Dong Bus Station) and Pham Van Dong were snarled because cars were queuing long lines. Thousands of vehicles moved inch by inch in the roads from the Mekong Delta provinces into the city. Holidaymakers driving motorbikes flocked to the southern metropolitan resulting in partial congestion. When night fell, more and more holidaymakers on motorbikes carrying luggage, fruits, chicken and rice entered the city. Because the volume of vehicles was increasing, traffic police controlled traffic in all roads to prevent congestion.