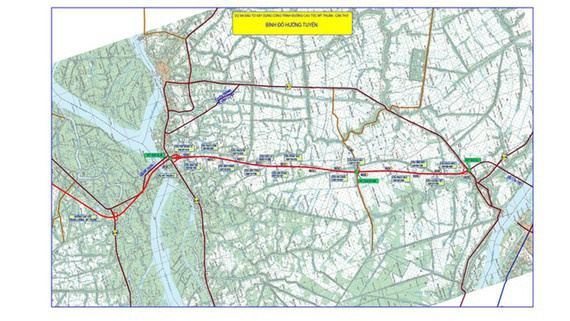 Map of My Thuan- Can Tho expressway project (Source: Transport Engineering Construction and Quality Management Bureau)

The 23-kilometer expressway is designed to run from the My Thuan Bridge 2 in Vinh Long City’s Tan Hoa Ward to Cha Va intersection connecting to National Highway No.1 in Binh Minh Town’s Thuan An Commune. Of which, 12. 5 kilometer- expressway will travel through Vinh Long Province and the rest 10.5-kilometer section will spread through the Mekong Delta province of Dong Thap.

The project has a total investment of VND4,826 billion (US$209 million) from disbursement of public investment capital invested by the Ministry of Transport under the management of Cuu Long Corporation for Investment, Development and Project Management of Infrastructure.

Vehicles will be allowed to travel at a maximum speed of 100 kilometers per hour. In the first phase, My Thuan- Can Tho expressway will have four lanes allowing speed up to 80 kilometers an hour. It is expected to be completed in 2022 and then come to exploitation one year later.

By Quoc An- Translated by Huyen Huong