A big name among backpackers in Vietnam, Pham Quang Vinh, recently shared his posts about inauthentic homestay experience in which homestays were invested in by rich people and then local inhabitants were hired to operate the facilities, thereby failing to offer travelers a genuine homestay experience.

Hence, I made up my mind to find authentic homestays where travelers can feel right at home and Hoai Khao Village was my destination where I enjoyed an unforgettable experience.

Hoai Khao is home to 34 households of Dao Tien people, an ethnic minority group in Vietnam.

In late April this year, seven homestays run by seven local families in Hoai Khao were put into service. 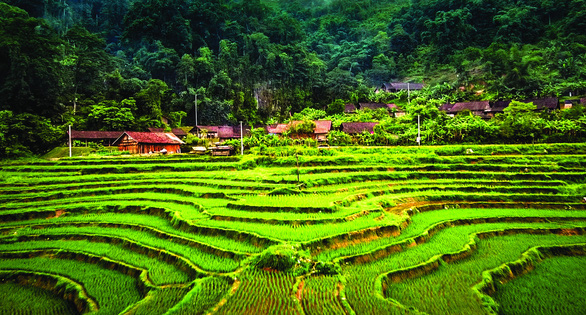 I tried following Google Maps directions to travel from the Phja Oac mountain peak to a homestay named Nhat Nhat in Hoai Khao and the maps showed me the way to Nguyen Binh Town.

When I was nearing the Son Dong T-junction, I saw a wooden road sign showing the way to the Hoai Khao community tourism village, while Google Maps still suggested another route.

I then made a phone call to Ly Huu Nhat, chairman of the farmers’ union in Quang Thanh Commune and owner of a homestay in Hoai Khao, to ask for help and later I learned that Google Maps was recommending the wrong route.

Thus, we took a photo of the village and sent information to Google Maps to request a correction.

“We learned that many people planning to visit the village got lost after they followed directions from Google Maps. We really appreciate that you guys asked Google for the correction,” said Nhat and Duc, two homestay owners in Hoai Khao.

The whole incident indicates that Hoai Khao in fact is yet to be a popular destination.

It was not until early this year that the village gained access to electricity. The village had its first concrete road capable of receiving 16-seat buses just two years ago.

Nhat revealed that authorities injected over VND30 billion (US$1.2 million) into the village to develop community-based tourism.

They chose Hoai Khao to invest in as it is a rare and beautiful place where the cultural identity of Dao Tien people remains almost intact. The 34 local households are very poor.

The financial aid has been used for building roads and allocating VND80 million ($3,386) to each of the households registering to provide homestay services.

Each household had to take out loans of over VND100 million ($4,233) to equip their homestays with essential facilities such as clean bedding items and toilets.

The whole village is on the hill overlooking terraced rice fields. Some 1.5 kilometers away from the village, there is another mountain which features a unique culture of local residents: they harvest giant honey bee beeswax from the hives there to use as a material to draw patterns on women's clothes.

The bee, whose scientific name is Apis Dorsata, is reportedly the second-largest honey producer, just after the honey bee.

It is known in Vietnamese as Khoai bee, and Khoai honey is mostly available for sale in Vietnam’s northern mountainous provinces.

An Apis dorsata beehive is typically about one square meter in area. This kind of bee can exactly locate their nest to return. Their nests are usually made on cliffs at an altitude of some 60 meters.

Dao Tien people never exploit honey. Beeswax is the sole product that they exploit from the bees.

Around the sixth lunar month, the bees will fly away, leaving behind bright yellow beeswax and no honey. Swarms will return to their nests when spring comes.

After the bee swarms have gone away, a local shaman checks the right time to collect the beehives.

This year, the locals chose the 15th day of the seventh lunar month to hold an offering ceremony before young local men climb the mountain to take the hives.

The hives, after being brought home, are cooked and divided equally among all villagers.

They draw patterns using beeswax on white fabrics which are then dyed indigo. The patterns on the indigo-dyed skirts will turn ivory white. 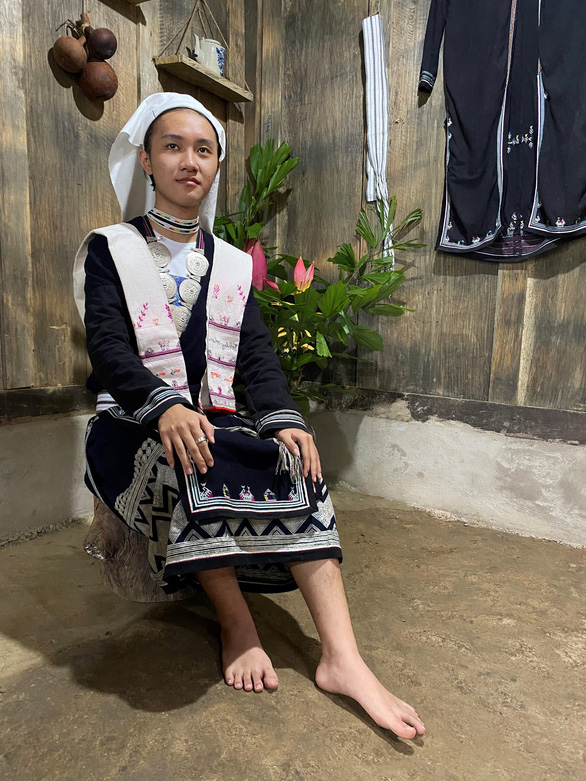 The way homestay owners in Hoai Khao host tourists will warm the cockle of their hearts, as they treat tourists with great kindness.

Ly Huu Nhat treated us with a big tray of local food in our first dinner in Hoai Khao. The tray features nine types of mouth-watering food put on banana leaves. 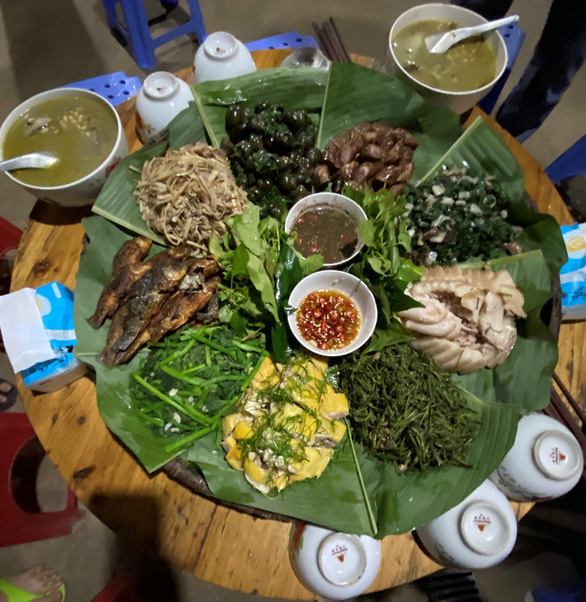 The farmers' union chairman, after coming home from work, rushed to the kitchen to prepare dinner, while his wife went out to pick wild leaves and bananas.

The wife, Chu Thi Hanh, said with a smile on her face: “It’s our daily activities. My husband is in charge of cooking. I do other chores.

“Dao Tien men usually share the kitchen with their wives."

To marry a Dao Tien woman, the groom’s family has to offer wedding gifts including six kilograms of silver, equal to VND130 million ($5,500).

Thus, taking charge of cooking is considered a way to continue to show their love and respect for their wives.