Editor’s note:Jordy Comes Alive, from the U.S., has lived in Ho Chi Minh City for three years and become a big fan of local food after spending time wandering around local alleys and markets to discover the culinary scene.

Deep, deep down back alleyways, where cars can’t pass, there’s a huge fortress-like neighborhood surrounded by clusters of old Saigon-style apartments. It’s another world back there made up of tiny maze-like streets lit by fairy lights and lined with street food delicacies. There are people everywhere sitting on the sidewalks drinking and eating, and it all becomes disorienting quickly. Shellfish stands seem to be everywhere, but lucky for me, today I was recommended Ốc Loan.

Unknown to me, Ốc Loan is legendary not merely for its shellfish dishes, or the fact it’s been in business for 16 years, but also for the notorious couple who own it. Dung and his wife, chef Loan, are known for the jewelry they’re wearing when serving the food, which is rumored to be worth over US$250,000! Spaced out from twisting and turning through numerous back alleys, I approached a dead-end street well illuminated with hanging lights. I could hear the noise of cheers and laughter. I reached Ốc Loan and it reminded me of a carnival.

The center of attention, the ring leader of this shellfish circus is Dung, and he’s a sight to be seen. He has the look and swagger of a Vietnamese John Wayne, he’s covered with an enormous amount of gold jewelry in the style of an American rapper (complete with a golden whistle). 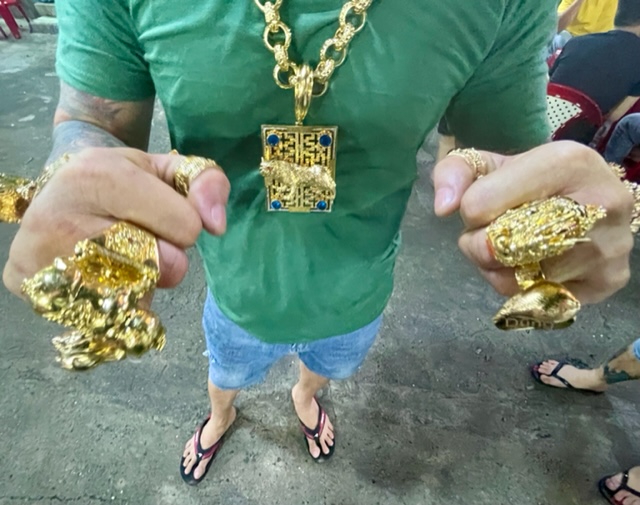 A close-up of the jewelry, rumored to be worth over $250,000, Dung's wearing when serving the food at his shellfish stall in District 3, Ho Chi Minh City. Photo: Jordy Comes Alive

His customers were his audience. Dung removed his heavy gold chain sporting a huge medallion and placed it around a customer's neck. Everybody was taking photos and screaming with laughter. I was 100 percent part of his audience finding myself clapping and hooting along as well.

Then Dung saw me off to the side (I'm sort of hard to miss) and then smiled at me, waving me over. His fans/customers began to laugh as I approached. I’m an American 6’1, bald and I was wearing big, boxy, white glasses. I was in a black sleeveless shirt and well, I was covered from neck to toe with tattoos. After living in Saigon for over three years, I am more than aware I stick out …just like a circus freak, and truth be told, I wouldn’t want it any other way.

Dung removed the golden necklace that's placed around his customer's neck and turned my way, lifting the necklace above my head and placing it around my neck. We were a sight to be seen. Everybody was going wild and I lifted my fists above my head as if I were the champion of the world. Without missing a beat, Dung struck a fighter's pose.

Now, the entire restaurant was in on it, everybody was laughing, pointing, yelling, and taking photos. Dung looked me in my eyes and nodded and I just couldn't stop laughing. This just became an unforgettable Saigon moment for me!

Dung is a showman who’s very, very good at his craft. I had instant admiration for him and I had yet to take a bite of his food. Through Google Translate, I introduced myself and thanked him for letting me try on his jewelry. He shook my hands and his fingers have the biggest gold rings I’ve ever seen on one man.

I asked why he wears so much gold. Dung simply explained it became his gimmick to attract more customers and has also grown to be his hobby.

I then asked if he could recommend what he’d like me to eat. Dung informed me he had three signature dishes and I told him to bring them all!

I looked behind him and his wife Loan was on the grills smiling and waving at me. She too was decked out in all kinds of gold bangles and bracelets. I smiled waving back, I was now in a great mood and I was excited to get down with some special snails. 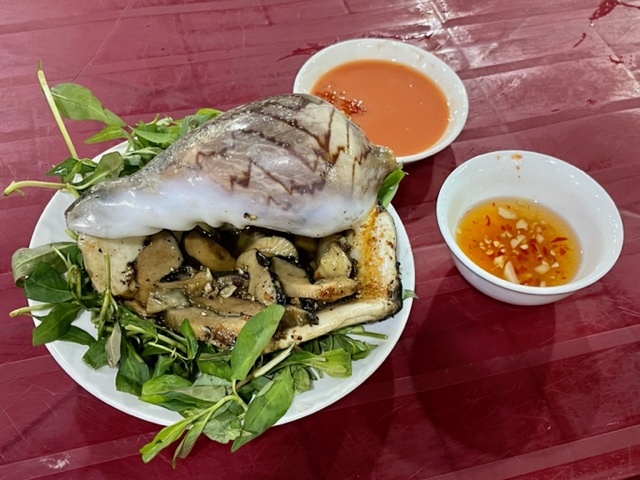 I watched one of the workers place a gigantic beautiful snail shell on top of a solo mini fire pit.

The snail was taken out of its shell, cleaned, sliced, and well-seasoned then returned back into its shell to be cooked over the fire. It’s then served up in its shell simmering in its own juices. What a dynamite presentation!

I speared a slice of a snail with my tiny 2-pronged fork and it looked identical to Portobello mushrooms. I popped it into my mouth to discover both the texture and chew, again, reminding me of Portobello.

The real surprise was its meaty flavor coated with fresh black pepper. I ripped off a chunk of bread to splash around inside the shell, mopping up the dark peppery broth that made me want to indulge more. I began dipping snail slices into the dipping sauce and sprinkling my bites with greens.

Before I knew it, half the dish and a third of the bread were gone. It’s excellent and just as good as any steak I’ve eaten. 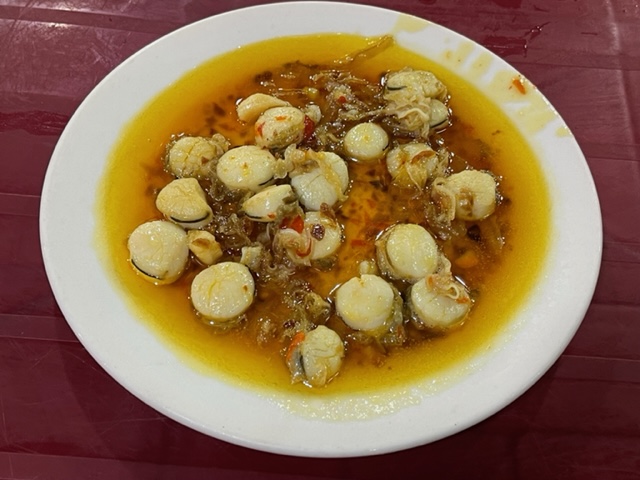 There were still two more untouched dishes on my plastic table, so I shifted my attention to the sò điep xao bơ.

Directly in front of me were white scallops with the size of bottle caps practically floating in clarified butter. Scattered amongst the scallops were sauteed onions sprinkled with crushed red peppers.

I plucked a few onions to top up a scallop, and as I lifted the food to my mouth, butter dripped, falling like rain drops over the plate. The scallops were super fresh, firm yet flaky when you bit down on them, the onions still added a slight chew.

Everything is better in butter, and this dish is designed for dipping your bread in. It’s a butter bomb, so I worked on the dish slowly. It can’t be eaten quickly; it must be savored and respected.

This dish is over the top and has the appearance of liquid gold, it reminds me of Dung himself. 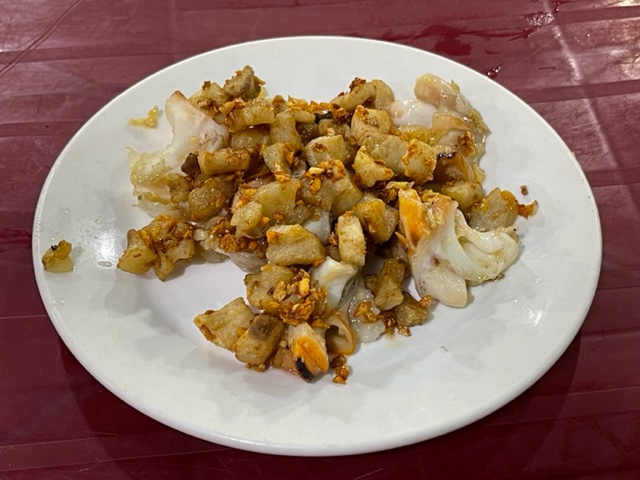 Finally, I focused on the ốc tỏi xao tóp mỡ. I intentionally saved this dish for last. I’m beyond obsessed with tóp mỡ (fried pork fat cubes), earning me the nickname 'Tóp Mỡ Boy.' My greatest personal food discovery as a foreigner has got to be tóp mỡ, I never knew something could taste better than bacon!

I was in awe of what I was looking at: two of my favorite foods now together as one. It’s an equation I never considered, never once have I thought ốc + tóp mỡ = what? How did I not know a dish like this could exist?

I assembled the perfect bite, a slice of the snail, a few cubes of tóp mỡ, and some flecks of fried garlic chips. There were many shades of golden browns that contrast against the white flesh of the snail meat now specked with garlic. I could practically taste this with my eyes so I closed them, opening my mouth in anticipation of what’s to come. For a split second, it felt like time stopped and all I could hear was the sound from the crunch of the tóp mỡ and my body felt like it was floating in waves of pleasure. The fat from the pork, the nuttiness of the garlic, and the earthy, meaty, umami of the snail all blended perfectly together. Not one flavor overpowered the others, it’s edible harmony.

I was a little overwhelmed, but I took a few more bites rubbing the combination down in the pink pasty dipping sauce. This dish is mouth bliss. Ốc tỏi xao tóp mỡ is instantly my favorite out of the three dishes followed by (a close 2nd) the black peppered snail then the scallops. I devoured all three plates plus two breads!

Ốc Loan is located at Nguyen Thien Thuat Tenements in Ward 1, District 3. It’s known to all snail connoisseurs and it’s priced slightly higher than most other shellfish shops. I think it’s worth it because there’s a lot of value you get along with your meal. The food is outstanding and then there’s a gold show for you to watch while you eat!

They also serve crab, oysters, scallops, octopus, and clams and Loan is willing to customize your dish to your taste. I can’t wait to return to Ốc Loan as it’s a golden opportunity to have an incredible meal!