However, after grasping the needs of children and schools, the theatre has added plays of moderate length, plot and character line for young audiences to easily follow.

Accordingly, the play Cau Chuyen Những Chiếc Rìu by author Tuấn Khanh has been recreated as it meets both literary and artistic language elements.

Dũng said that the play was first performed on the stage of the Viet Nam National Puppetry Theatre in 1985 but in the form of shadow puppetry.

This time, the creative team improved the play by combining both shadow and water puppetry, with many performance spaces on two floors of shadow puppetry, one floor of water puppetry and a front stage.

The play uses a combination of puppets and real people. The expressive language and flexibility of the characters have created a lively puppet show to captivate the audience from beginning to end.

Cau Chuyen Những Chiếc Rìu tells the story of a poor boy who suddenly capsizes his boat while crossing a river and drops his iron axe into the water. He then met Ông Rồng Nưoc (Mr Water Dragon) and undergoes a test of honesty when the dragon presents him with silver and gold axes.

The boy immediately says they are not his axes and receives a golden axe as a reward for his honesty.

Hearing that news, a rich man also pretends to throw an iron axe into the river, hoping to get the silver and gold axes, but pays a heavy price for his greed.

Great performances to start the year

The puppetry performance Lung Linh Khổng Tưoc (Shimmering Peacock) is performed against a black background with the water stage in front and the shadow stage above, bringing the audience into a magical space. 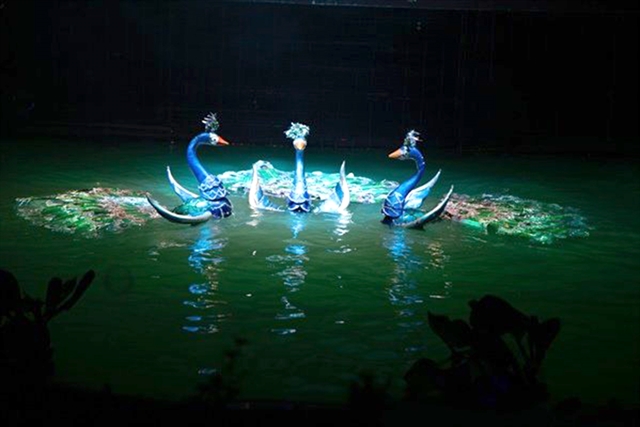 Through the skilled hands of artisans, the colourful peacock puppets spread their tails and dance to the music, creating a joyful atmosphere.

According to People's Artist Nguyễn Tiến Dũng, khổng tưoc (the peacock), is one of the most beautiful birds, a symbol of beauty, nobility and luxury in Asian culture. Therefore, the theatre has chosen the performance for the new year to wish peace and prosperity to all.

The performance of Mười Hai Con Giap (Twelve Zodiacs) in the form of puppets in disguise and water puppetry will also attract the public with its unique qualities. 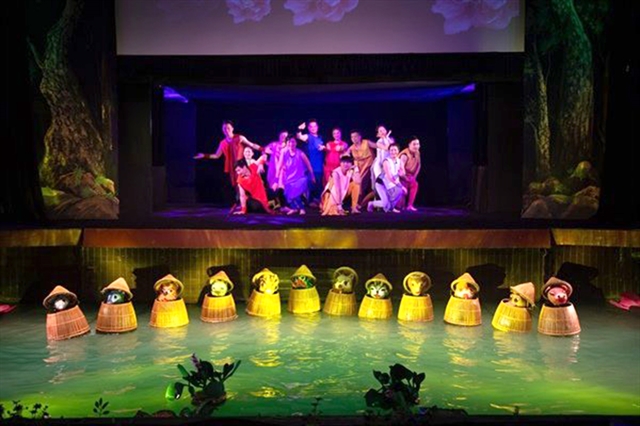 The 12 zodiac animals are symbols that accompany the spiritual and cultural life of Vietnamese people, especially over the Tết holiday.

Through a unique and attractive performance, Mười Hai Con Giap” reminds the audience, especially children, to remember the origin and beauty of Viet Nam's traditional culture.

According to Dũng, after a long hiatus due to the COVID-19 pandemic, the theatre has prepared a force of young promising artists, ready to control puppets with intricate designs in the new shows.

“The theatre has also been invested in by the Ministry of Culture, Sports and Tourism to renovate the gallery into a mini puppet theatre stage with about 100 seats. This stage will be used to serve small groups of guests, which is suitable in the current situation,” Dũng said.