YÊN BÁI — The magnificent terraced rice fields in Mu Cang Chải District in the northern mountainous province of Yen Bai has been officially recognised as a 'Special National Heritage' by the Government.

Although the decision to list the area among the national heritages was made two years ago, due to the pandemic, the award ceremony only took place last week, organised by the Yen Bai Provincial People’s Committee.

Alongside the “Special National Heritage” title, lễ mừng cơm moi or the 'New Rice Celebration' – a traditional ritual of ethnic Black Mong people – has also been recognised as 'National Intangible Cultural Heritage' by the Ministry of Culture, Sports and Tourism.

About 300km northwest of Ha Noi, these rice paddies have gained international fame for their impressive angles in a topographically challenging region. Each year, the colours change from green (in late spring and summer) to yellow (in October) as the rice ripens. In 2019, the vibrant place was named among 'The Most Colourful Places in the World' by Conde Nast Traveler.

The magazine also suggests people should visit in the beginning of October, when the rice harvest begins, and stop by twice: once early in the morning before the crowds arrive, and a second time at sunset.

"Centuries of careful cultivation have shaped what is easily some of the most beautiful rice terraces in the world."

The terraced fields have been created and cultivated by Black Mong people -- the primary residents in the area, over centuries.

Associated with the time when the rice ripens every October, the Black Mong organise the 'New Rice Celebration' – a traditional ritual to thank Heaven and Earth, and their ancestors for favourable weather, for a bumper crop, for a good year, and for health for everyone. 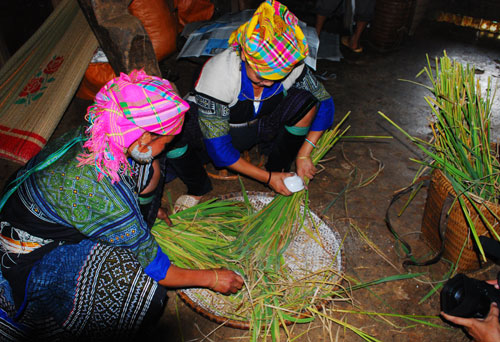 Speaking at the title-granting ceremony, Deputy Minister of Culture, Sports and Tourism Hoang Đạo Cương said that Yen Bai Province needs to preserve the whole area as it is, to maintain its fame as a domestic and international tourist destination.

He also suggests the province promote the 'New Rice Celebration' as a unique community tourist product to help to improve the life of local people.

“The province is striving to become a top destination in the country’s northwest region,” he said.  VNS