Born in Saigon, Truong fled Vietnam in April 1975 when she was just 6, bouncing from refugee camps in Guam and the Philippines before landing at California’s Camp Pendleton. In America, they would relocate several times — starting in North Carolina, where they experienced frequent racism, before eventually ending up in Houston, Texas when Truong was in high school. By this time, however, she says she’d become so accustomed to assuming the position of “outsider” that she struggled to form strong connections even within the large Vietnamese American community of Houston’s Little Saigon enclave.

Through her own lens as an outsider among outsiders, Truong is a master of teasing out narratives that wouldn’t often even be considered — even in the Vietnamese diaspora context. Her first book, The Book of Salt (2003), is a national bestseller set in 1930s Paris from the perspective of Gertrude Stein and Alice B. Toklas’ gay Vietnamese cook Binh. While much of the best Vietnamese American literature today is set, naturally, against the backdrop of the Vietnam War, it’s refreshing to read Vietnamese narratives that look elsewhere for the material.

Other works may not be overtly Vietnamese, but speak to relevant themes of migration and perpetual foreignness. The Sweetest Fruits (2019), tells the story of Lafcadio Hearn, a 19th-century sojourning writer whose prolific body of work spans letters, essays, and even cookbooks. Rather than simply stitching together his correspondence, however, Truong leverages fiction to reorient his story through the eyes of three known women in his life.

“All my work begins with a question I can’t answer. When I thought about Lafcadio Hearn, I wondered: why would someone want to leave their country of origin, and everything they know?” Truong explains. “Seeing how hard that experience was on my family and others in the diaspora, I wanted to know what would motivate someone to make that choice if they didn’t have to.”

Truong’s own story offers inspiration for the unorthodox life path. While at Yale for her undergraduate degree, she studied literature, before studying law at Columbia. After a stint practicing law, Truong decided to pursue a career as a writer. Beyond her novels, she’s penned essays for the Wall Street Journal and T Magazine, and been named a Guggenheim Fellow, Princeton University Hodder Fellow, and Writer-in-Residence at Baruch College.

Most recently, Truong worked as librettist for or/and, a multimedia theatrical poem produced in collaboration with composer Shih-Hui Chen. A narration set to a chamber ensemble, the show will debut on April 29, 2022 at the Asia Society Texas Center in Houston. We caught up with Truong to discuss her prolific body of work. 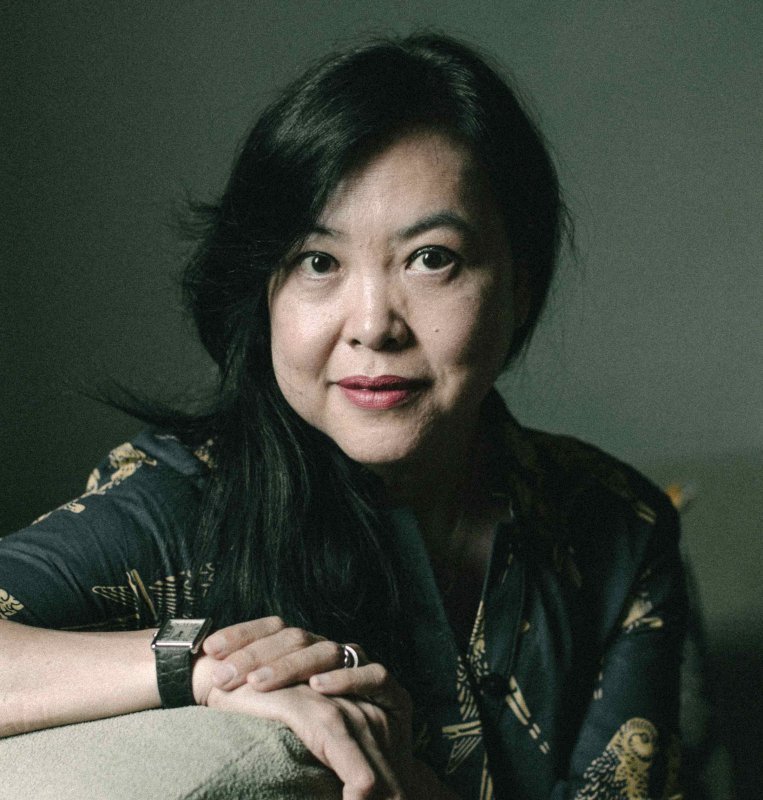 Take us back to your first-ever published piece of work. What was it?

When I was a freshman in college, I saw that there was a feminist literary journal on campus. I submitted a short fiction piece about an Asian American girl and her relationship to a doll that was given to her. She loved it so much but at the same time hated it to her core because she didn’t look like the doll, with blonde hair and western features.

When you say everything you write has a Vietnamese or Vietnamese American lens: how does that manifest in a work like The Sweetest Fruits, which is about a historical half-Greek, half-Irish writer?

The story isn’t told in the voice of Lafcadio Hearn, but from the voices of three women — women who are positioned more like myself, in the sense that they don’t have the same sense of agency and privilege as he had. They travel because they have to. My own experience helped me sort of piece together what these particular characters could have felt about this idea of travel, crossing boundaries, away from home and family. 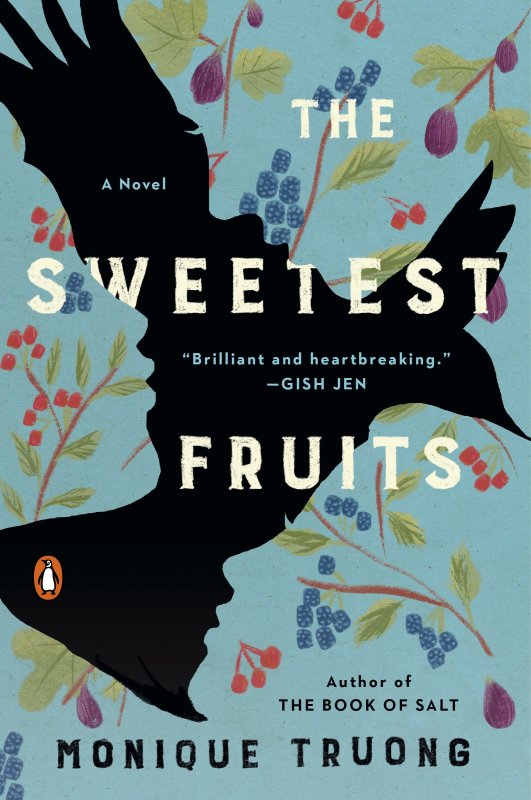 Which novel is most personal? How do you use fiction to change or amplify a more personal work?

In terms of biographical facts, my second novel Bitter in the Mouth (2011). I grew up in a small town in North Carolina called Boiling Springs, like the main character in that book. But I don’t have a form of synesthesia, which is the neurological condition that makes her taste words that she speaks or hears. I certainly have a strong physical memory of flavors I’ve encountered, but synesthesia is more of an automatic response.

How do you feel food and fiction go hand in hand?

I would have loved to have started my writing career as a food and travel writer. It used to be such a difficult path, a very closed society. It wasn’t until Book of Salt came out that places like Gourmet (a venerable food magazine that sadly doesn’t exist anymore) reached out offering me a chance to write. What influences my fiction writing is a personal experience with food, which can encapsulate so much more than what’s on the plate. Ever since I came to the US, it was one of the tangible elements of home, of a previous life, that could be evoked and recreated here. It’s a kind of magic, or time travel. 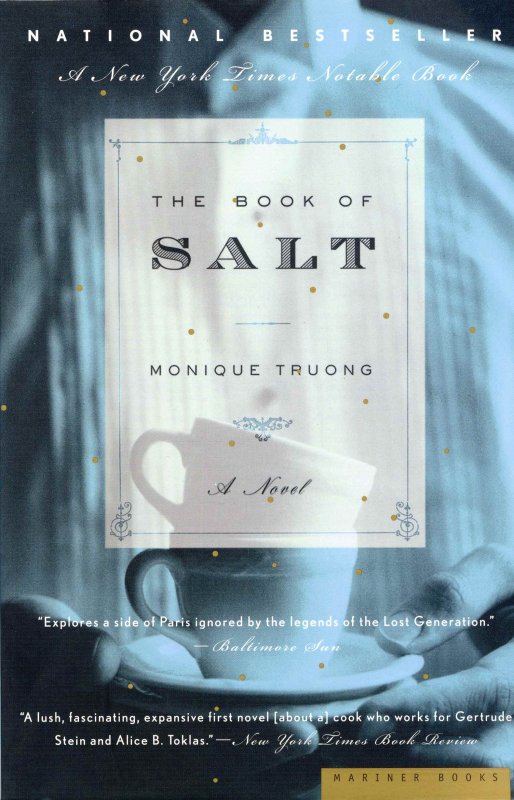 THe Book of Salt

How did you uncover the story of Binh, the protagonist of Book of Salt, who is a Vietnamese cook? And what made you realize this would be an important and interesting perspective to tell?

The story started as an article — I never thought it would be a novel when I first sat down. I had read about the quote-unquote “Chinese” cooks that Gertrude Stein and Alice B. Toklas had at their Paris home in the Alice B. Toklas Cookbook. It was very intriguing, but I could also tell that it had somewhat infantilized them. I just felt like there was so much more to these men than the way that Toklas had remembered them. After the short story was finished, I wanted to know more about what this character, Binh, has to say about being in this household of basically iconic American lesbians.

I quickly realized that this would also allow me to talk about Vietnam in a time before the Vietnam War. Yet still see Vietnam in dialogue with America — through Stein and Toklas — and in dialogue with French colonialism. One of the great things about historical novels, for readers, is that we have a long view. If we’re reading something set in Paris in the 1920s, we know what comes next. That enlivens the novel: I knew my readers would know that the Vietnam War was looming, and that there will come a time when America will be the primary player within the lives of someone like Binh and his family. I wanted to talk about Vietnam and Vietnamese people, and our relationship with a colonial power prior to the United States. 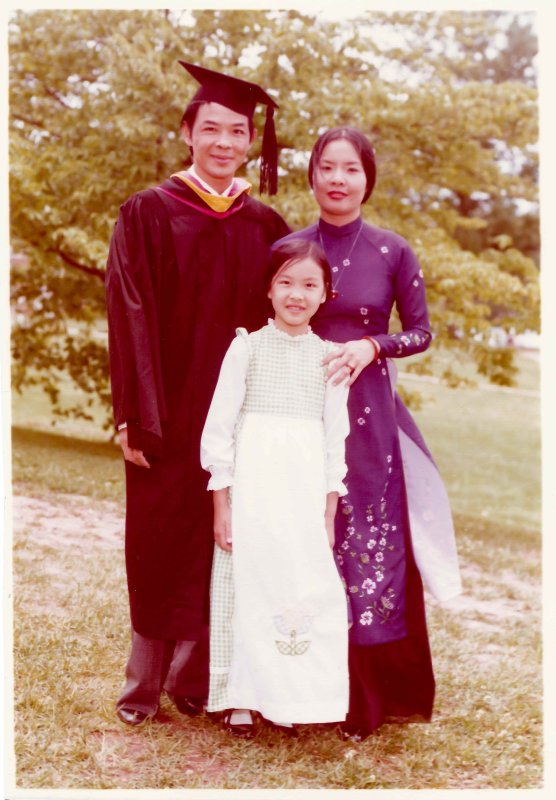 Monique with her father and mother in 1976, at her father's college graduation from Gardner-Webb Baptist College in Boiling Springs, NC, the little town where Bitter in the Mouth is set. | Source: Monique Truong

What’s been the reception to your work in your family?

Sadly, my father passed away before the book came out, though he knew it was forthcoming. The book is dedicated to him because the emotions that my main character feels — the loneliness and profound isolation he felt in Paris was very much drawn from my father’s own experience as a young student at a boarding school in France, who then went to college in Paris. My father didn’t go back to Vietnam until his twenties. As far as my mother: it took her a while to actually read it, as she was much more comfortable reading works of literature in Vietnamese or French. She’s never said to me: “Oh my god, why are you writing in the voice of a gay man?” But I think she just kind of took that with how bizarre it was that I was writing a novel to begin with. I was a lawyer before.

And what about the Vietnamese American community at large, particularly in older generations?

When it first came out, I did some really big events in Orange County for the Vietnamese American community there. It actually surprised me that there was this interest. But the community was so excited and thrilled to have a work of fiction by a Vietnamese author, and there was such a kind of pride. People were coming and buying the book to support and telling me that they were going to give it to their kids or grandkids.

It’s not necessarily that they saw themselves in The Book of Salt, but rather that they saw me as someone getting national attention for a book. And in subsequent years, with folks like Ocean Vuong, that’s become part of such a phenomenon of being a writer in a refugee and immigrant context. There’s just such a hunger to be seen.

What do you want Vietnamese American readers to glean from your work?

The honest answer here — I write novels that I would want to read. That sounds selfish and self-centered, but I know I have to be engaged in the narrative. I have to want to turn to the next page. I’m writing for someone like me. And it makes me think about my classes in college. When I read Asian American narratives, I’d sometimes feel a sense of shame whenever I felt that the author had to make compromises in the way they wrote about themselves and their community in order to get a book published. I would never want a Vietnamese or Vietnamese American reader to read my work and sense anything like that. I’m not ashamed of being a refugee. Monique Truong and her grandfather Phạm Văn Tươi, taken on the first day of Tet in Saigon in 1971. His pen name was Tu Xe (a pun on "tu sais") when he published short, satirical books. He also owned a bookstore and had his own small publishing house. | Source: Monique Truong

Do you have a relationship with Vietnam today?

I’ve only been back twice, and the first time was in 2007. The reason I wanted so long is that I really wanted to go back with my mother. For me, it can never be just tourism. It all comes with a sort of sadness. The first time leaving was a loss of home, and the first time coming back was a second kind of loss: the loss of a fantasy in my head that there was this other country I could go home to and be more accepted. Perhaps it could have been the case if my vocabulary was more than that of a six-year-old child, which is essentially when I left.

It’s fascinating to me to see younger generations of Vietnamese Americans going to Vietnam: I have friends who are filmmakers, photographers, and designers there. They all have a very different relationship with Vietnam, which is incredible. But I’m 53, you know? It seems impossible for someone in my generation to have that same kind of joy, but everyone should have the right.

What are some words of advice for young Vietnamese writers who may be reading this?

Look at groups like the Diasporic Vietnamese Artists Network (DVAN), which is incredibly important because it spotlights not just founder Viet Thanh Nguyen, but the collective. And he knows how important this is, which is why he’s created this space to amplify more voices, from works of romance to speculative fiction. You cannot always depend on the mainstream presses and the traditional gatekeepers. Write what speaks to you personally. Don’t let what’s out there dictate you. Don’t be afraid to fail. Don’t be afraid to be who you are.