For Julien Nguyen, a Vietnamese American artist based in Los Angeles, the canvas is a space where he can translate his sprawling thoughts into otherworldly realms.  His first major show, set at New York City’s Matthew Marks gallery, a series titled “Pictures of A Floating World,” features haunting landscapes that look like science fiction renderings of heaven alongside intimate portraits of friends and lovers. The name of the show is a reference to ukiyo-e —  17th century Japanese woodblock paintings which depicted “floating worlds” of fantastical indulgence.

“When I was very little, I had the idea that I wanted to be a concept artist for video games and films. The person who designs like characters, monsters, spaceships, that kind of stuff,” Nguyen told me over the phone.

Now the 30-year-old artist channels that creativity into immersive paintings that blend the decadence of the present with the romanticism of the past. His 2020 oil painting, “The Temptation of Christ,” depicts a thin young man in a tank-top, regally fighting off the devil. The two are backdropped by abstract mountains and a hellish, blood-orange sky. Nguyen told me that he based this contemporary rendering of Christ off his “dear friend” Austin.

“In a lot of my paintings I will think about a friend of mine and their different qualities that they may have and see whether I can adapt and change that into a larger narrative or simply I will ask them to sit for me to do a very straightforward painting from life,” he said.

By using people from his everyday life as subjects, he grounds these dreamscapes in reality and fosters intimate intertextuality.

According to Nguyen, his work is rooted in the unique experience of navigating a diaspora. He was born in Fairfax, Virginia in 1990 to parents who met in the United States after fleeing Vietnam around the time of the fall of Saigon in 1975. Drawing from the Christian bible, early Renaissance painting, and ancient Confucian aesthetics, he delves into that sense of displacement while fostering an alternative, hybridized vision of history.

In 2020, his collaboration with the fashion label Ottolinger caught viral steam with A-List celebrities like Dua Lipa and SZA spotted wearing his Renaissance-esque print. Currently preparing for an exhibit of sketchings for late 2022, Nguyen hopes to also work on films and digital paintings in the future.

I spoke to Nguyen about his Vietnamese heritage, artistic process, and what inspires his stunning, idiosyncratic work. 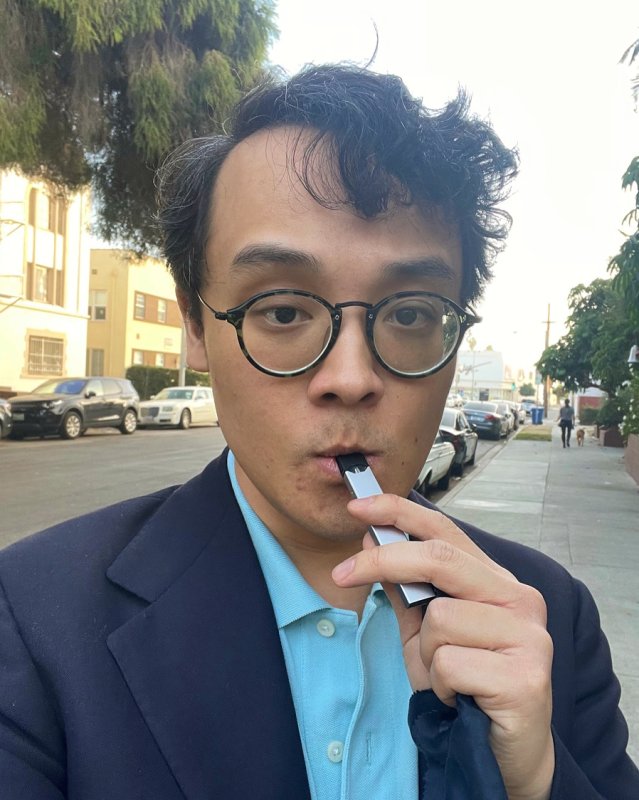 Can you tell me a bit about your upbringing and your path to becoming an artist? Has your Vietnamese heritage influenced your art?

The experience of being part of a diaspora is very much always on my mind. I was born in Fairfax, Virginia, and I moved to Los Angeles when I was five. My parents both came to the United States just before or immediately after the fall of Saigon in 1975 and they met in the States. My family on my father's side comes from a very long line of imperial bureaucrats. They were working with the colonial regime back before the Vietnam War. That has a whole host of problematic associations with it and I think that that very awkward and strange position between the Eastern and Western world has always been on my mind.

Sometimes, it comes out in the paintings, maybe even more directly in the way I approach it stylistically. But subconsciously, I can't help but feel very much, maybe not necessarily torn at a very odd meeting point between very different kinds of worlds.  My interest in art started with popular culture, and then I discovered  more traditional Western approaches to art and was very obsessive about learning those things from a very early age. In some ways, my approach through art history has been backwards from the normal experience you would have as someone looking at art today and figuring that out.

I am still trying to figure out how it affects me personally and comes back to the painting. There's a very strong element of feeling a little bit of ungrounded in my work, and then using the work to try and trace out both my own history, while also creating new forms of possible histories based on the material of my life. 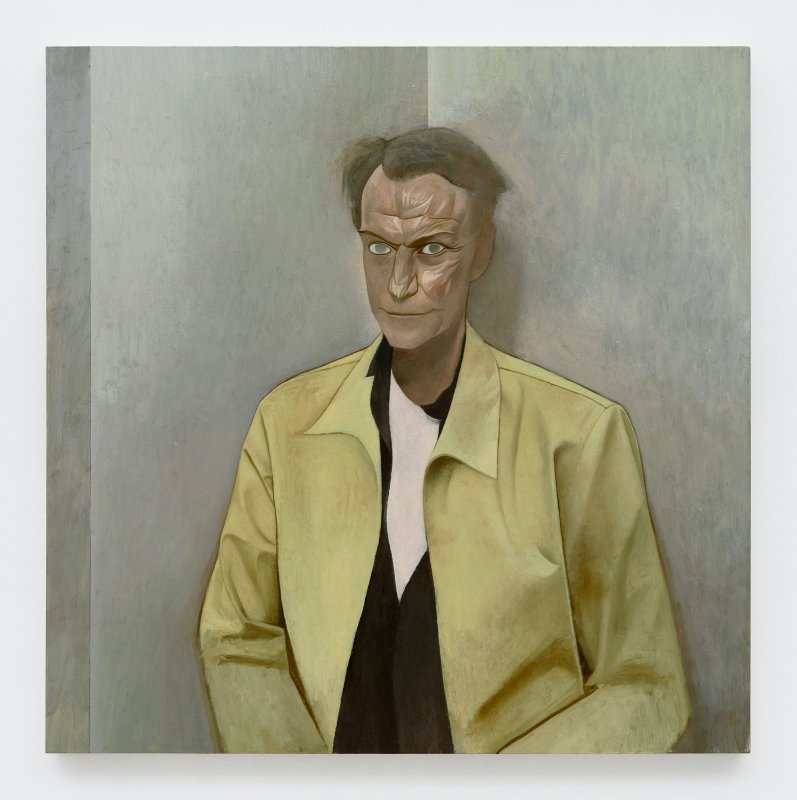 You draw from a wide range of sources like science fiction and biblical and classical aesthetics. What's the through line to your work?

I'm still figuring that out. But I do think the throughline that exists in so many of these sources is trying to depict and imagine the world that we live in through alternative types of stories. Take the real world as a starting off point and then using the power of narrative symbolism and history to transform it into something that reflects back on it in an interesting way. 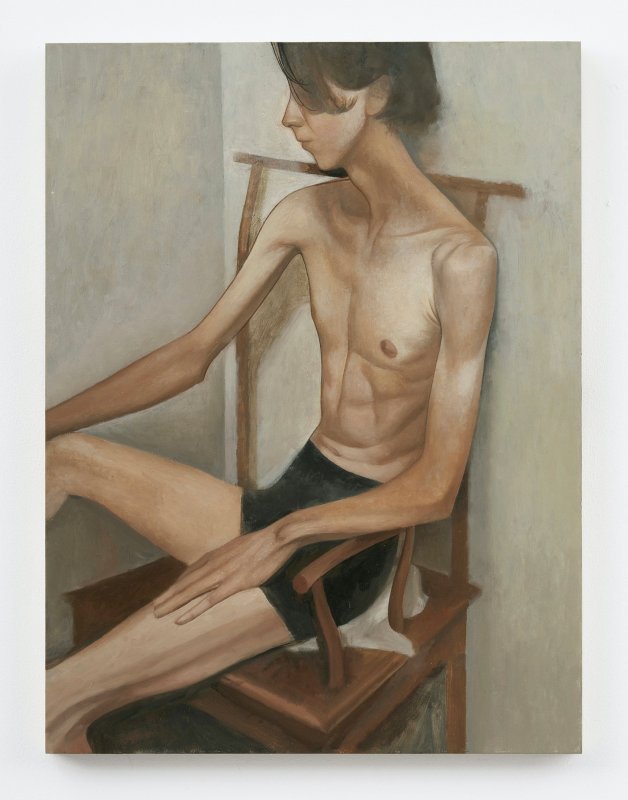 In a recent essay for Frieze, the writer Evan Moffitt described The subjects of your paintings as “necrophiliac twinks” that are objects of desire and yet are also unsettling and unnerving. How does desire factor into your work?

I thought that was a really interesting way of expressing it. I don't know if I would go so far as to use the word necrophiliac.  But, I do think that it brings up an interesting statement about desire. It’s both a frightening and exciting thing. Desire is a double-edged sword.

If I'm painting to sort of insert an image of a friend into a  religious painting, I can't help but channel emotion from my life which is perhaps a bit sentimental. I very much want the work to have something of my own heart. So, that also plays a role.

Desire is a very intense and powerful emotion. It draws you in and changes you, whenever you feel it. That idea of something being both alluring and because of that allure causes a bit of fright or makes you trepidatious is a very powerful idea to me. You could link it up to the classical idea of the sublime where something of great beauty also stirs up feelings of foreboding or terror.

Last year, Dua Lipa, SZA, and Barbie Ferreira were spotted wearing pieces from your collaboration with Ottolinger. How did it feel to see your work to have a far reach in this unconventional way?

It was very amusing for me. I love the work that Ottolinger does and was very happy and very curious to see how my work would translate into a completely different artistic context. I did not have any involvement at all in how the clothes were designed.  I was just like, ‘Okay, why don't you guys take these paintings and see what you do with them.’ I'm so excited to see what happens as a result of that cross pollination. But then to see them being worn by figures with a certain amount of notoriety that was really funny and fascinating to me.

They [the paintings] were sort of a religious and very strange allegorical images and whether or not any of the original meaning comes across through these series of translations, regardless of the intent of  the wearer, it makes me feel that I'm doing something right that people are responding to them and that they want to put such images on their body. It’s quite exciting for me. I was very overjoyed. 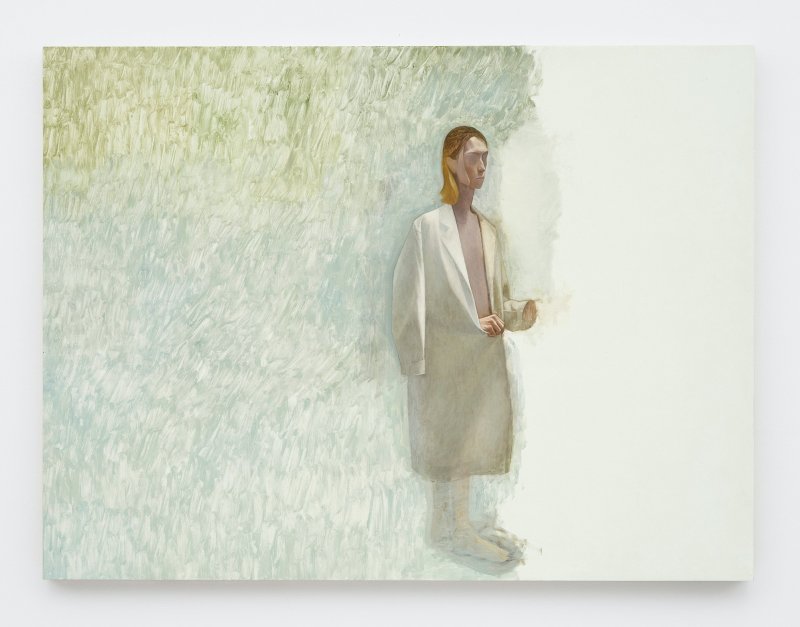 Who are some other contemporary artists that you admire that are similarly fascinated with the early Renaissance period?

As a painter, you can't help but go back to that period, because that is a period where the idea of being an artist comes into being, at least in the West.  Recently, I've been very much fascinated by classical Chinese painting from the Middle Ages and even earlier onwards. Part of the reason I'm fascinated by that stuff is because traditional Vietnamese culture takes a lot of its roots from Confucian culture of ancient Chinese society.

Part of my impulse there is to learn a different form of artistic reception and understanding that is connected to me on a little bit more of a personal level. There's a lot of people I talked to who love Renaissance painting, but I'm not sure I see so many people working with it in such a kind of direct fashion as I do and perhaps, for different reasons.

So, you’re still searching for artists with similar interests?

Yeah, a little bit. Sometimes,  I feel like I'm in a very private discussion with myself and that’s something I enjoy a little bit too much. But I'm always very interested in other artists’ history. But I do feel that I'm working off in my own corner with a lot of this stuff.