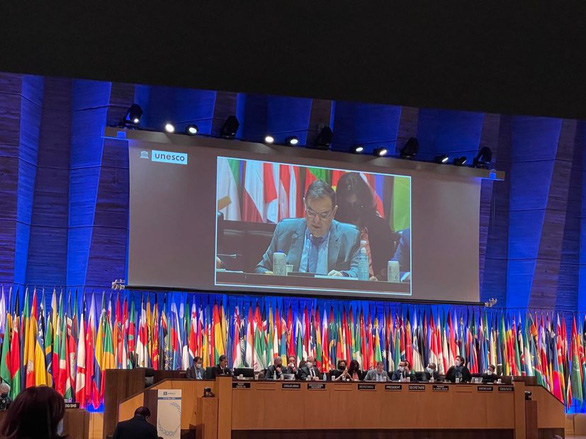 PARIS — Poets Nguyễn Đình Chiểu and Hồ Xuan Hương, alongside 58 other cultural icons, have been officially honoured by UNESCO, with their birth and death anniversaries to be commemorated between 2022 and 2023.

The decision was approved on Tuesday by the 41st UNESCO General Conference.

The anniversary will celebrate the 200th birthday of Nguyễn Đình Chiểu as well as Hồ Xuan Hương’s 250th birth and 200th death anniversaries.

The nomination is thanks to efforts of the People's Committee of Bến Tre and Nghe An provinces, the Vietnam National Committee for UNESCO, the Department of Cultural Affairs and UNESCO, the Ministry of Foreign Affairs, along with Vietnamese experts and scientists.

According to Le Thị Hồng Van, Permanent Representative of Vietnam to UNESCO, the approval shows that Vietnamese cultural values have been highly appreciated by the international community.

“This is the pride and joy not only of Nghe An and Bến Tre provinces but also of the whole nation,” Van said.

“This is also the recognition of the international community for the values ​​of the Vietnamese people in terms of culture, history, learning traditions as well as the ideology of freedom, equality, education and women's liberation which also reflect UNESCO’s efforts.”

Besides being a famous teacher and a poet with nationalist and anti-colonial writings against the French colonisation of Cochinchina, he is also a medical practitioner who devoted his life to the health of others.

His poetry is full of humanity, encouraging and praising people who are willing to do good deeds for the community. His main works are all composed in nom (the old Chinese-based Vietnamese script).

His most famous work is Lục Van Tien's Nom poetry collection, which contains many meanings of morality and good traditions of the nation. The work is widely recognised as one of the two greatest poems in Vietnamese history, besides Nguyễn Du’s Truyen Kiều (The Tale of Kiều).

Despite his blindness, he has always been a role model of overcoming life's difficulties and pursuing the ideal of lifelong learning which reflects UNESCO’s spirit.

Hồ Xuan Hương (1772-1822), was called “the Queen of Nom Poetry” by the later generation poet Xuan Dieu, and is also one of the greatest poets in Vietnamese history.

As a female living in the time of feudalism, which discriminates against the rights of women, her poetic works also carry a lot of meaning about gender equality and fighting for the liberation of women in Viet Nam society.

Previously, there were five Vietnamese celebrities whose births and deaths were also honoured.

Today, 11:19
18 foreign sailors rescued from a sinking ship in Vietnam