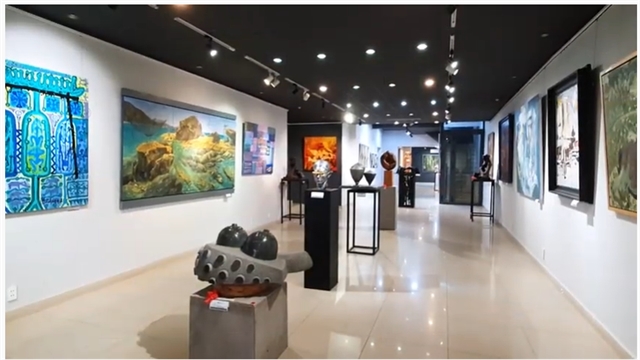 HCM CITY —  The HCM City Fine Arts Association is hosting a month-long exhibition of its members’ artworks to celebrate its 40th anniversary which falls on November 28.

Many of the works are the results of nine creative camps launched by the association in 2021.

The camps, which were held in the provinces of Gia Lai, Bình Định, Ninh Thuận, Phu Yen, An Giang and Bình Dương, as well as Buon Ma Thuot City, HCM City and at Văn Lang University, attracted hundreds of the association’s members and non-members from Southern provinces.

All of the works feature landscapes, people and life of HCM City and Viet Nam, and express the artists’ thoughts about love, family, and society.

They also feature the humanitarian efforts of frontline forces as well as Vietnamese people in the fight against the COVID-19 pandemic.

“Although the artists faced difficulties during the pandemic and social distancing, they have been working hard to create more quality works,” Nguyễn Xuan Tien, chairman of the association, said.

“Through their works, the artists want to introduce their inner worlds and feelings of art creativity to viewers.”

The association has awarded top prizes for 52 sculptures and paintings, and 100 consolation prizes at the event.

The top prizes were given to a metal sculpture Sương Tan (Fading Fog) by Trần Viet Ha conveying a message of a better future, a lacquer triptych painting Nhịp Sống (The Rhythm of  Life) by Nguyễn Đình Ngọc, and steel bas-relief Metro 1 by Nguyễn Ngọc Vinh. The exhibition is open for the public at the association's location at 218A Pasteur Street in District 3 until December 5. It is also available on the association’s YouTube channel to serve audiences across the country.

The HCM City Fine Arts Association was established on November 28 in 1981 with a mission to support the city’s artists and introduce their works to the public.

In the beginning, it had only 300 members, including leading artists like Trang Phượng, Quach Phong and Huỳnh Phương Đong.

The association now has more than 700 members and 10 clubs of young artists, women artists, veteran artists and ethnic Hoa artists, among others.

It has organised numerous exhibitions featuring its members’ works which reflect the development of Viet Nam’s arts and connect artists with art lovers.

Despite the pandemic, the association in September launched its first virtual exhibition themed “Sắc Mau Bình Yen” (Colours of Peace) in an effort to promote its members’ works to the public.

The event was held on the association’s Facebook page, displaying 103 paintings and sculptures created by 63 artists.

Le Xuan Chiểu, deputy chairman of the association, said the event was one of the association’s meaningful activities during social distancing. It helped to connect artists in the city and all over the country who wanted to share their works with art lovers.

The association has also hosted exchange programmes with artists from Southeast Asian countries and other countries like South Korea and Canada to offer opportunities for local artists to learn from experienced artists.

In particular, it has launched many programmes to support young artists such as the Biennial Art Exhibition for Young Artists. The event was first held in 2009 to discover new faces and introduce their work to the public.

Along with exhibitions, the association has held field trips across the country and creative camps every year to encourage artists to find inspiration for new work.

“With the motto of 'Arts connecting life', the association’s trips and camps are necessary for artists to change their feelings and seek new topics to produce more quality works,” Tien said. — VNS