On her way of finding the 'quintessence' of Vietnam, Hanoi-based artist AP Nguyen recreates landscape miniatures, bikinis, karaoke and beach trips, among other campy imagery from her parents' era, in a playful and endearing attempt to relive experiences that were never hers.

AP Nguyen's debut solo installation 'Lovecore,' currently on show at Manzi Art Space in Hanoi, is one of the few art events that bring reflections of 'kitsch' as an esthetic to Hanoian art lovers.

Deriving from the German word ‘verkitschen’ meaning ‘to make cheap,’ kitsch is used to refer to popular, mass-appeal, manufactured arts that lack substance, oftentimes associated with the rise of the nouveau riche in the post-industrial Western world.

When it comes to kitsch artworks, experts frequently point to Jeff Koons' glistening mega-balloons, brightly-lit souvenir paintings in the line of Thomas Kinkade, or Eiffel Tower replicas located all around the world as prime examples.

AP Nguyen, a 22-year-old artist born in Hanoi, found the foreign description of kitsch surprisingly fitting to describe the crux of her parents' lifestyle in Vietnam.

She soon developed an infatuation with the esthetic and found it all through her family's habits, namely the use of hon non bo -- or landscape miniatures -- in her house.

Traditionally displayed as items of religious significance in Vietnamese temples and pagodas, hon non bo can now easily be manufactured, purchased, and used as decoration in one’s home. 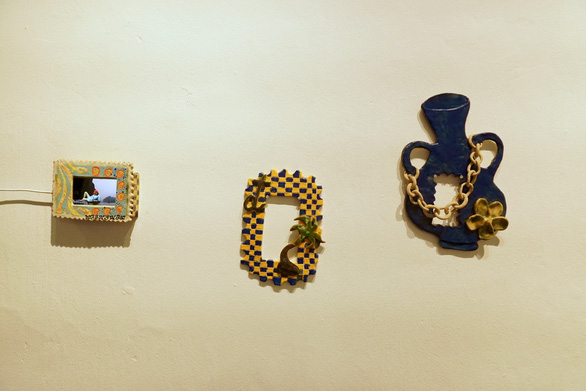 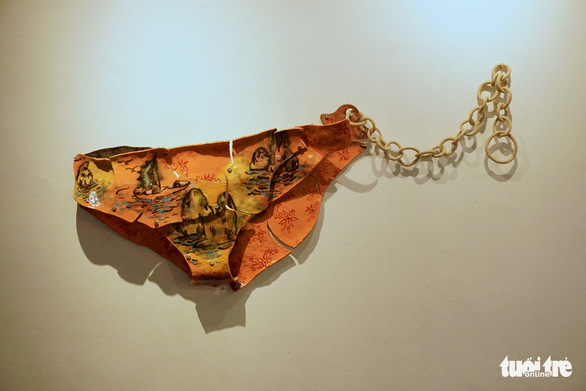 At AP Nguyen's exhibition space, viewers can find a cluster of mountain-shaped hon non bo elevated on layers of blue carpet, which instantly make one think of the limestone pillars of Ha Long Bay -- a famous image printed on postcards and souvenirs of Vietnamese tourism.

The artist herself can be found on video screens hidden in these sculptures, dressed in a traditional ao dai, wearing heavy make-up, floating on top of a cliched waterfall stock image, and lip-syncing to classic songs by Vietnam's revered songwriter Trinh Cong Son -- an apparent homage to the Y2K karaoke visuals that still remain wildly popular in Vietnam.

She made use of her own body to re-enact one of the most romantic recollections of her parents' era, an act that can be read as kitsch itself, according to the artist. 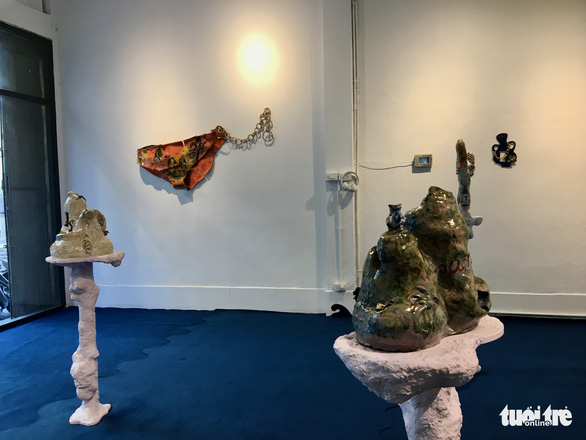 Being a Gen Z (aged 16-25) youth who grew up in an upper-class household and attended international schools since she was little, the artist admitted she has little connection with the garish and kitsch part of the Vietnamese experience.

She is infatuated with the extravagance of karaoke nights, extended families' trips to the beach, and big weddings with live dance music, but most of her memories of them have either faded or are exclusively secondhand.

"I don't have those experiences, so the only way to be true to that is to be really fake," AP Nguyen said about her creative tenet for 'Lovecore.'

This principle is best represented by a standout piece in the installation: a sculpture made of several ceramic parts hangs on the wall, depicting what looks like a pair of underwear or bikini bottoms, broken into pieces and tied to a chain.

Once again, AP Nguyen playfully subverts the convention and expectation of viewers.

Her first intention was to create a glaringly large keychain, with palm tree images imprinted on a bikini piece, creating a fusion of images that reminds her of a childhood beach holiday.

However, the final product emerges as suggestive, opening up thousands of interpretations for audiences.

For AP Nguyen, pushing her art to the boundary of kitsch is a means of exploring her complicated relationship with her parents, who grew up without exposure to the art world but supported her creative career wholeheartedly.

"Kitsch is a small kind of revolution," she remarked.

"It makes something so poor or points out some things that are in bad taste, and say, 'This is culture.'

"Otherwise, we're going to live in a society that constantly desires this upper-class, elite esthetic, where it's completely inaccessible to so many people."