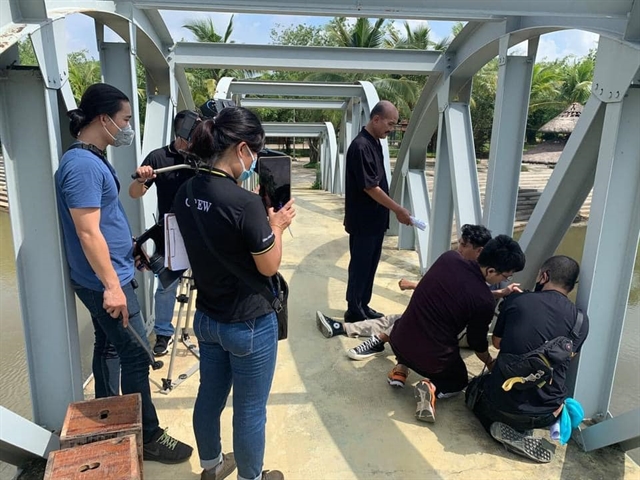 HCM CITY — After a long hiatus due to social distancing rules, film crews have returned to the studio and are taking safety precautions during the “new normal” phase.

After HCM City lifted the lockdown, production crews for many dramas and web dramas reopened studios to complete unfinished works or meet their schedules, especially those slated to air during Lunar New Year holiday next year.

Director Xuan Phưoc said his crew started filming the movie "Xóm trọ tren may" before the COVID-19 outbreak and has recently completed production.

Phưoc and the crew had to travel to neighbouring provinces rather than HCM City as selected scenes in the city were no longer available days after lockdown.

“Locals did not allow us to film for fear of COVID-19 infection. Long An Province was where we went to shoot the rest of the movie,” Phưoc said, adding that the crew must comply with 5K regulations, regularly take rapid tests, and sanitise upon arrival at the studio or while working.

Director Dũng Nghe is currently in Bình Thuận Province for some final scenes of the TV series "Hẹn hò cung thần tượng", which has been mostly filmed in HCM City.

Compared to the past, filming during this period has increased production costs but the crew has tried to keep up with the schedule, he said.

Many filmmakers, actors and actresses are monitoring the pandemic situation and preparing for new work.

Actress Kim Tuyến said that she is about to participate in a movie with old settings in mid-November, while actress Văn Phượng will return to the studio on November 25 for director Hoang Tuấn Cường’s movie "Nha khong ban".

“I am both worried and excited about coming back to the set. I feel more secure that all crew members are fully vaccinated,” Phượng said.

Many film crews are now focusing on completing unfinished dramas, movies with early screenings, and short web dramas and sitcoms that do not require the crew to travel across provinces.

“The series that I am working on has only 12 episodes, but we have been working on it for quite a while since there were times when some members were suspected of having COVID-19. We will continue filming only when everyone is perfectly fine. It is difficult to move the setting to another locality as locals are afraid of crowds,” director Dũng Nghe said.

Director and Meritorious Artist Nguyễn Phương Điền has yet to start filming the TV series "Thời mở cửa" with 60 episodes and is waiting for casting in early 2022.

About 40 to 50 people will be on set and with the participation of many actors, the total number will be 100 to 200 people.

This has discouraged many set owners to rent out their locations, Điền said.

“Being nervous and worried most of the time, it affects my creativity and excitement level. I am spending time working on the script and preparing for pre-production. I will see how the epidemic situation goes to have a final filming schedule later,” director Trương Dũng added. VNS