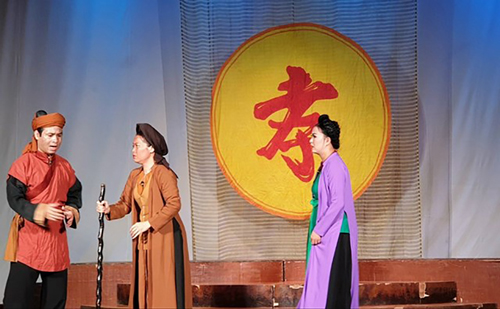 HCM CITY — Artists from the Viet Nam Tuồng Theatre will perform at the China-ASEAN Theatre Festival and Forum, which opens in Nanning in China’s Guangxi Province on November 27.

They will introduce tuồng or hat boi (classical drama), a unique Vietnamese art that developed from a folk art into a royal art in the 17th century.

They will stage Thoại Khanh – Chau Tuấn (Husband and Wife), a famous play featuring love and piety based on folk stories from the central provinces. It was first released in 1957 and has been restaged many times by artists from leading theatres in the country.

“We hope foreign audiences will learn about Viet Nam’s history, culture and lifestyle from the play,”said Phạm Ngọc Tuấn, director of the Viet Nam Tuồng Theatre.

“The China–ASEAN Theatre Festival and Forum is a chance for our actors, particularly young talents, to perform and share skills and experiences.”

Tuồng consists of singing and dancing accompanied by music, and is highly stylised and filled with symbolism. Its themes include monarchist loyalty and patriotism which help define the play’s structure, language, music, struggles, and characters' personalities.

Artists often wear heavy costumes weighing up to 10 kilos. They use their body, from the fingers to the elbows to all of the muscles, to move on stage. They sing and dance at the same time while expressing the emotions of the characters.

This year, the festival has attracted several leading art troups from ASEAN countries and China. The event will close on December 2. — VNS