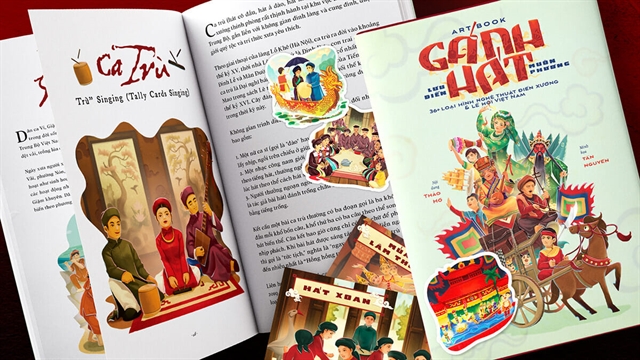 The 200-page book will introduce music genres from different regions of the country, such as hat xẩm (blind busker's singing) of the North, nhã nhạc cung đình (royal ceremonial music) of Huế, and đờn ca tai tử (tai tử music) of the South.

It will present theatrical performing arts like cheo (traditional Vietnamese opera), and du ke, a unique style of musical theatre created by the Khmer in southern Viet Nam.

Du ke originated in Tra Vinh in 1920 from local farmers who loved to sing. The art is a product of the creativity of the Khmer.

The group invited cải lương (reformed opera) artist Bạch Long to give advice on folk arts in the South.

Long began his love affair with cải lương when he was 12 years old. He was trained by his father, the late People's Artist Thanh Ton, and other talented actors like Minh Tơ and Thanh Tòng. He won two gold medals for Best Actor at the National Cải Lương Festival in 1982 and 1987.

The Saint Gióng festival is a traditional event in north Viet Nam, held annually from the 6th-12th of the fourth lunar month with a series of processions, rituals and performances.

It commemorates the legendary national hero who grew overnight from a three-year-old boy into a giant to help rid the country of foreign invaders.

Ok Om Bok, also called the Festival of Worshiping the Moon, takes place under the full moon in the 10th lunar month annually. The Khmer believe the moon is a god who controls the weather and crops throughout the year.

Thảo, the book’s creator, said she was born in the Cửu Long (Mekong) Delta province of Vĩnh Long, so cải lương and đờn ca tai tử became part of her childhood. When growing up, she travelled across Viet Nam and learned about folk arts and traditional festivals.

“I had an idea of developing an art book to introduce my interesting discoveries about Vietnamese folk arts to readers. In 2019, I met Tấn Nguyễn and we made our dream come true,” Thảo said.

The book is expected to be released in January by Vietnamese comic company Comicola.

It is available for pre-order at https://go.comico.la/ganhhat. — VNS