Five critically endangered langurs, a type of monkey killed for bushmeat and traditional medicine have been killed by the poachers in Vietnam.

According to conservation group Fauna and Flora International (FFI), restricted to the forests of central Vietnam, the known global population of this type of langur is less than 1,000. Other conservation groups estimate their number may be higher as some habitat areas have not yet been surveyed.

The primate is a regular victim of the illegal wildlife trade, and is sought after for bushmeat, traditional medicine and the pet trade, FFI says. They are also threatened by deforestation.

It is listed as “critically endangered”, the highest risk category under the Convention on International Trade in Endangered Species of Wild Fauna and Flora (CITES).

In Quang Ngai, the poachers ran off, leaving behind a motorbike, bullets and silencers,  local media said in a report. Local authorities are “looking into the case”, it added. 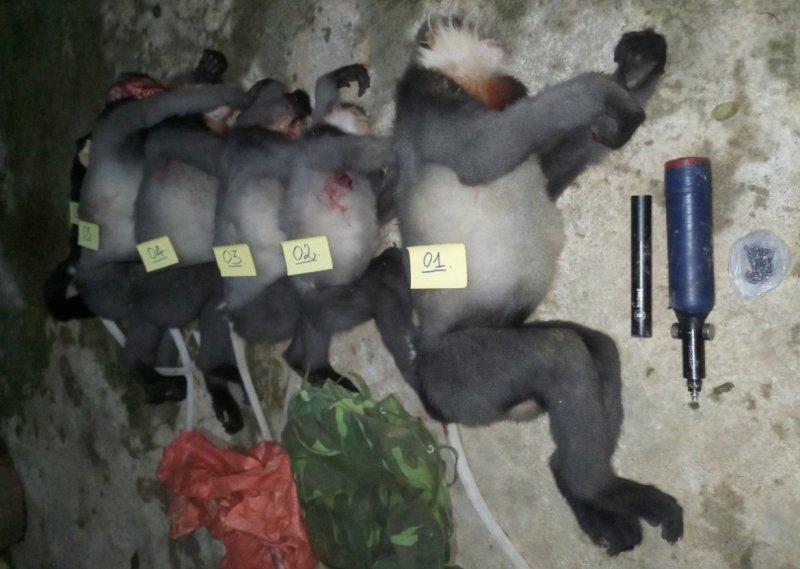 The grey-shanked douc langur is listed in Vietnam’s “red book”, making it a criminal offense to kill one. But law enforcement is a huge issue.

“If we fail to… bring them to justice, this will continue to happen.” Under Vietnamese law, poachers in such a case could face seven years in jail, he added.

Vietnam is home to some of the world’s most endangered species, including the Red River giant soft-shell turtle, the Tonkin snub-nosed monkey and the Sao La, a type of mountainous antelope.

Wild animals are under constant threat in the country, with their body parts in high demand for both food and traditional medicine, AFP reported.