HÀ NỘI — The famous Spanish designer Diego Chula passed away on Wednesday at the age of 49.

According to Chula's relatives, for the past year he has had cardiovascular disease. On the evening of October 13, Chula was admitted to hospital and suffered a stroke.

He had been working on a thổ cẩm (brocade) collection for Viet Nam Day at the rescheduled Expo 2020 in Dubai on December 30. 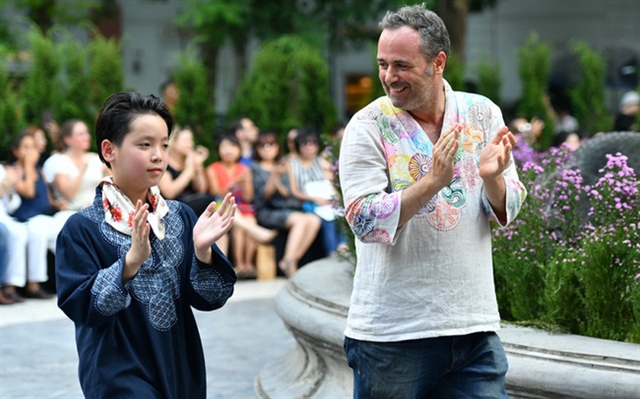 Vietnam Design Week paid tribute to Chula on Facebook: “He is an inspiration, a great personality who is always generous with the Vietnamese creative community, and has really made improvements and contributions to local design scene by his approach, concept and works. You did bring us to the sunny side, Diego! Rest in peace!”

In 2003, Chula and his wife Laura came to Viet Nam to visit relatives, where they fell in love with the Vietnamese people and culture. They decided to stay in Ha Noi.

The couple had planned on opening a furniture business in Viet Nam, but after successfully designing a few dresses for Laura to go to a party, Chula decided to pursue fashion.

Chula's design style was always influenced by architecture, with striking and impressive colour choices. The designs emit a message of optimism, love of peace and sharing, but moreover, a respect for traditional Vietnamese values.

He was passionate about silk and brocade materials, applying them to innovative ao dai designs as well as western dresses and other clothing lines.

Diego Chula also supported many Vietnamese artists through music nights and non-profit exhibitions at his studio. The Spanish designer helped many people with disabilities, providing them with employment and turning his fashion factory into a second home for them.

Chula’s fashion products are made by the skilful hands of Vietnamese people with disabilities. When combined with his creativity, it is of little surprise that received such love from the public.

His collections have regularly featured at the Viet Nam Fashion Week since the early 2010s, making him the international designer with the most displays. VNS