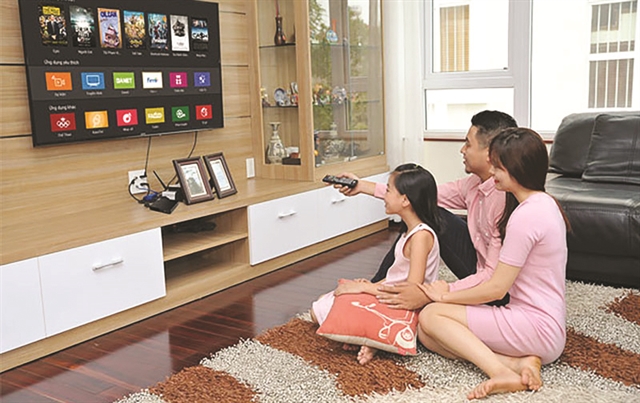 HÀ NỘI - Online distribution is becoming a global trend for the movie industry, particularly during the time when people are forced to stay at home due to COVID-19.

It not only helps filmmakers to increase audiences but also provides more opportunities for the audiences to access the world's movies.

However, experts warned there should be requirements for completion of a legal framework as well as measures to solve current problems of copyrights and content to ensure the public can access and enjoy the most attractive, safe, and healthy works.

Issues related to the management of films, both domestic and foreign, released online were discussed carefully during meetings of cultural authorities and experts to comment on the draft amended Law on Cinema.

These issues continued to be a focus at a webinar recently held by the Legislative Research Institute under the National Assembly (NA) Standing Committee in collaboration with the NA's Committee on Culture and Education.

Le Thanh Liem, director of the Ministry of Culture, Sports and Tourism's Legal Department, told hanoimoi.com.vn that the inclusion of issues related to the management of online movie distribution in the amended Law on Cinema is essential to “fill in the legal gap”.

Liem commented: “Regulations on the distribution of movies in cyberspace still has gaps. The Law on Cinema and related laws have not included this provision.”

While some experts said movies released online only need to ensure that they do not violate prohibitions and should include a classification level according to regulations on foreign online film distributors' operation in Viet Nam, others said the foreign distributors must set up a branch or representative office in the country.

“The main problem is that inspection, control, and post-checks of released works must be innovated and deeply professionalised to improve quality," Trần Thanh Hiep, former rector of the Ha Noi University of Theatre and Cinema, commented on hanoimoi.com.vn.

Some experts pointed out that it is a challenge for Vietnamese filmmakers to bring their products to online platforms since many of them are depending on revenues earned from cinemas.

According to film director Bảo Nhan, to release movies online, the Vietnamese market needs more time to build a habit among the audience.

"And most importantly, the issue of film piracy in Viet Nam is still unsolvable," he said on Zingnews.vn.

Meanwhile, director Charlie Nguyễn said that currently, online platforms purchasing a Vietnamese movie are not enough to pay for the filmmaker's investment in the film.

He also asserted that the movie can go directly to online platforms only when they pay enough.

"To see the future, we need to wait. But I think movies now have to live on the cinemas where the audience can fully enjoy a cinematic work. If a movie only lives on a smartphone, it's such a pity," he told Zing.

Vũ Quỳnh Ha, the content director of Galaxy, said that films traditionally shown in cinemas will not be affected by those released online because there is a difference between audiences who need to come to cinemas and those who want to watch online.

Sharing the same opinion, Tuấn Nguyễn, marketing manager of BHD, said that the Vietnamese market has its own characteristics. According to him, cinema is currently still one of the main revenue sources for movie works.

"Revenue from online platforms in Viet Nam is still in the 'future tense'," he said.

In the producers' views, there needs to be a clear legal corridor as well as support from the authorities for filmmakers to be creative and innovative at the content stage.

"In the Law on Cinema, there are many general prohibitions creating barriers for creators. We hope that with filmmakers' recommendations, the authorities can change that and support them more," the BHD representative said.

Meanwhile, Galaxy's content director said on Zing that a slowdown of the Vietnamese film production industry had created favourable conditions and advantages for foreign films to dominate the domestic market.

Compared to foreign films, she believed Vietnamese films were being more tightly controlled.

"In order not to be dependent on foreign film sources, we want the State to have more policies to support Vietnamese film producers. In the field of OTT content, management agencies need to create a fair playground and equality between domestic enterprises and cross-border businesses," she said. VNS