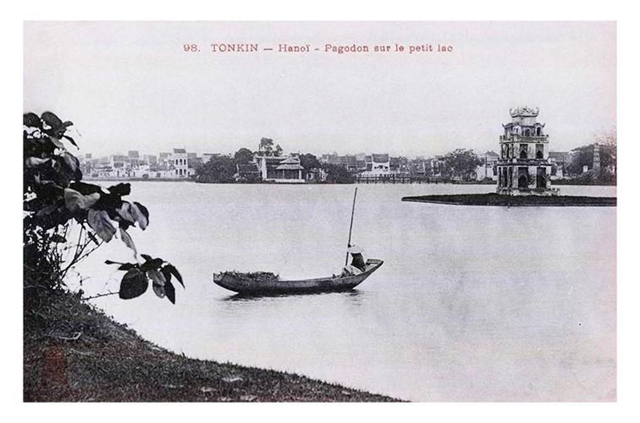 HÀ NỘI Over 100 historical documents, images and drawings capturing the changes of Ha Noi’s historical landmark – Gươm (Sword) Lake – over the past century will be exhibited on the website of the National Archives Centre No 1 from October 8.

According to the organisers, the exhibited archive is just a small part of many collections about Ha Noi that are currently preserved at the National Archives Center I. Through the event, they hope to bring back memories of the Sword Lake and the capital city in the old days to the public.

The exhibition is divided into three parts – The Process of Changing Of Sword Lake; Preserving the Cultural and Historical Space of Sword Lake; Sword Lake – Centre of Service, Culture and Entertainment.

The first part will enable the viewers to witness the changes of the historical landmark over the past century, starting with 1873 before the French colonists began to construct the first buildings on the concession area along the road running across, presently Phạm Ngũ Lão Street.

With a prime location, the lake was chosen by the French colonists to become the heart of the renovation of the capital city as soon as they arrived.

During the construction process, the Governor General of French Indochina requested that the area around the lake be kept with a width of at least 20 metres and no structures be built along this area while all cottages on Paul Bert Street (now Trang Tiền Street) have to be removed.

In the renovation of Ha Noi, Sword Lake has helped to maintain the original Asian landscape and architecture of the capital city, making it different from other westernised cities.

Under the planning of the French, Sword Lake was like an intersection of the architectural and cultural features of the East and West, and an appropriate transition between the residential areas of the locals in the north and of the western colonisers in the south.

The second part of the exhibition showcases the city authorities’ efforts in preserving Sword Lake through the implementation of many policies.

From 1884, the French colonisers urgently planned to rebuild the city, including repairing Sword Lake into an entertainment area and building a wide road around the lake. Therefore, all cottages, communal houses and places of worship such as Ba Kieu Temple, Bao Ân Pagoda, King Le Temple were demolished except for religious works on Ngọc Sơn and Quy Sơn islets. 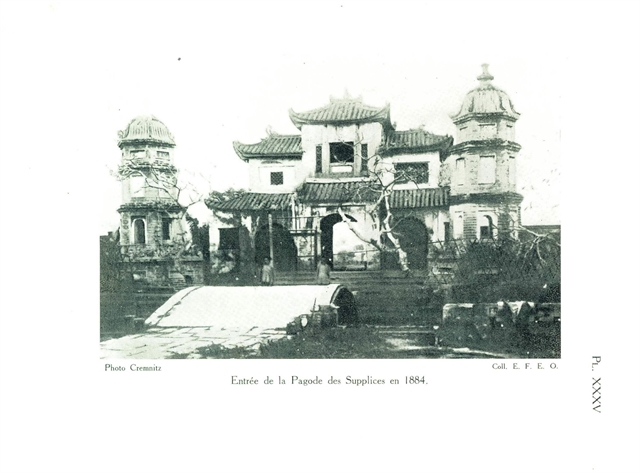 Such demolition caused a wave of frustration not only for Hanoians but also for some French officials, which forced the Governor General of Indochina to sign Decrees on March 9, 1900 and April 15, 1905 on the preservation of historical works of the capital city, including Ngọc Sơn Temple and Thap But (Pen) Tower.

Another decree was signed on July 11, 1925 by the French Governor-General of Indochina, regulating that any listed historical and religious works that needed repair had to be proposed by the Department of National Monuments Conservation.

After 1937, the Governor of Hanoi issued a decision to change the use purpose of a number of historical and religious works in Ha Noi. Accordingly, some works had to be completely dismantled and some others were only partially removed.

The last part of the Sword Lake, East-West Intersection is an affirmation that Sword Lake is the service, cultural and entertainment centre of the capital city and the whole nation.

Accordingly, with the desire to turn Sword Lake and the surrounding area into a centre of culture, politics, religion, commerce, services and entertainment of Ha Noi, the French Government built mansions and facilities, administrative offices on the east of Sword Lake.

Many factories and shops sprang up around the lake, and Western streets were gradually formed. European-style entertainment centres were also built such as the Opera House, clubs and swimming pools.

Until the early 20th century, the material and spiritual life of Hanoians gradually blended with westernised elements, leading to changes in their lifestyle from culinary taste to art enjoyment.

Cinemas and cafes also increasingly appeared in the city, and trams gradually became a popular and familiar means of the citizens, particularly traders.

Sword Lake, East-West Intersection can be visited at http://archives.org.vn and https://facebook.com/luutruquocgia1. VNS