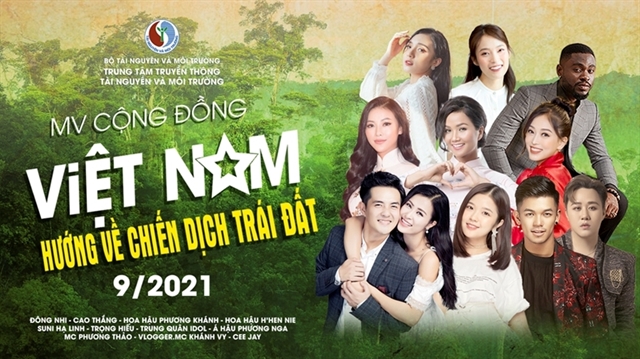 HÀ NỘI — Numerous artists have starred in a music video released by the Ministry of Environment and Natural Resources in response to the Clean Up The World campaign.

"The video by the ministry is meaningful," said singer Đong Nhi.

"I hope that the video will encourage people to work together in environment protection making it greener and cleaner."

Entitled Viet Nam Hưong Về Chiến Dịch Trai Đất (Viet Nam Towards Earth Campaign), the video was released on Tuesday night on Youtube, Facebook and Yeah1 Music and got nearly 30,000 views by the next morning.

The video was released as a part of the activities held virtually in Ha Noi, the northern provinces of Bắc Giang and Thai Bình, and the central provinces of Thanh Hóa and Quảng Nam.

The campaign was organised globally for the first time in 1993. It has become one of the annual international environmental events with the participation of hundreds of millions of people in more than 130 countries around the world.

The campaign calls on organisations, businesses, individuals and the entire community to participate in activities to improve and protect the environment; collect, treat, and recycle waste; and refuse to use disposable plastic products and hard-to-degrade plastic bags. — VNS`