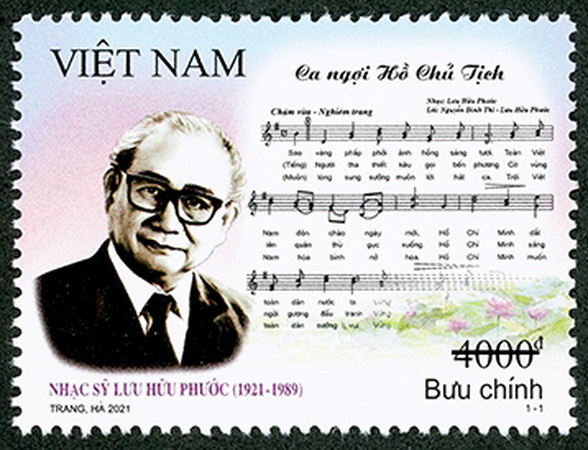 The stamp was designed by artist To Minh Trang and Phạm Trung Ha from Vietnam Post Corporation. Its content was provided under the agreement of the late composer’s family. — Photo courtesy of Vietnam Post

Each stamp is divided into two parts. A portrait of the late composer in black and white while the notes to his famous song – Ca Ngợi Hồ Chủ Tịch (Praising President Hồ Chí Minh) – on the background of a lotus pond.

The stamp was designed by artist To Minh Trang and Phạm Trung Ha from Vietnam Post Corporation. Its content was provided under the agreement of the late composer’s family.

Phưoc, who was born in the southern province of Cần Thơ in 1921, was considered as one of the greatest talents and the representative of the southern music style in the early days of Vietnamese modern music.

As one of the biggest names of the Vietnamese revolutionary music, he was also one of the pioneers with successful compositions in the marching genre that was derived from western music.

Some of his works with great ideology, high artistic and historical values include Thanh Nien Hanh Khuc (Youth March), Hồn Tử Sỹ (Martyr’s Soul) or Giải Phóng Miền Nam (Liberation of the South), which have been sung and memorised by generations of Vietnamese people.

With many significant contributions to the Vietnamese music industry, the celebrated composer was granted many State recognitions like the First-Class Independence Order in 1987 and posthumous Hồ Chí Minh Prize for Literature and Arts in 1996.

He was also a professor, academician, musician theorist and chairman of the Culture and Education Committee of the National Assembly of the Socialist Republic of Viet Nam.