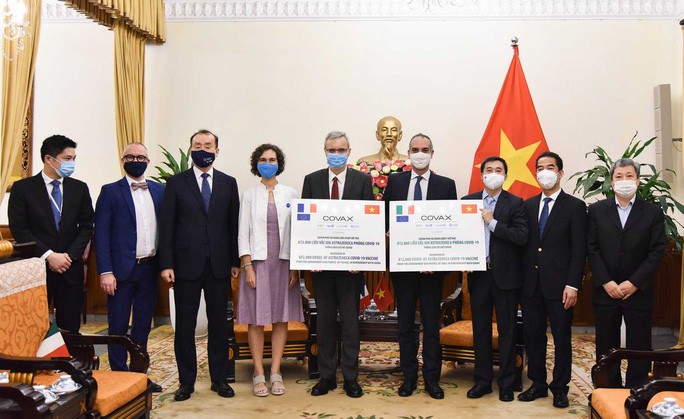 The donated vaccines, which will be provided through the COVAX dose-sharing mechanism, include 672,000 doses from France and 812,060 doses from Italy.

Addressing the event, Deputy Minister of Foreign Affairs To Anh Dung thanked both the French and Italian governments and people for their valuable support, particularly as Vietnam strives to speed up its vaccination campaign.

Many countries have continued to send vaccines to support Vietnam’s fight against Covid-19.

Papua New Guinea on September 10 sent 30,000 doses of the AstraZeneca vaccine to Vietnam under a government-level agreement on vaccine transfer.

National Assembly Chairman Vuong Dinh Hue, upon returning from the European trip on September 12, handed over 200,000 doses the AstraZeneca vaccine which were donated by the governments of Belgium and Slovakia to the Ministry of Health.

Japanese Foreign Minister Toshimitsu Motegi said on Tuesday they would donate an additional 400,000 AstraZeneca Covid-19 vaccine doses for Vietnam. Japan has donated approximately three million doses of the AstraZeneca vaccine to Vietnam, with the shipments arriving in June and July.

So far Vietnam has received nearly 11.73 million doses of Covid-19 vaccine through COVAX, according to UNICEF.