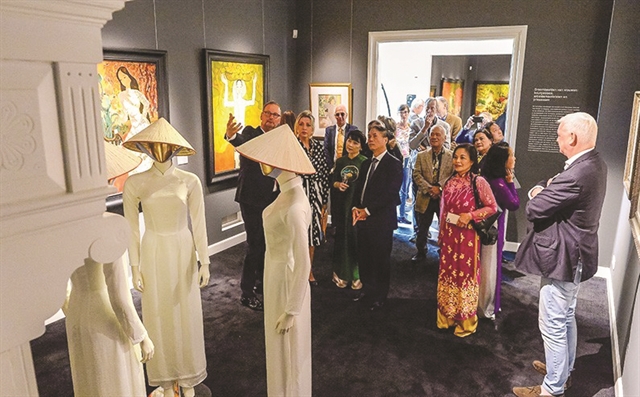 Vietnamese and Dutch friends admire artworks displayed at an exhibition featuring the optimistic people and life of Viet Nam in Delden, the Netherlands. Photo baoquocte.vn

HÀ NỘI - Paintings featuring the optimistic people and life of Viet Nam during historical times are being exhibited at Museum No Hero in Delden, the Netherlands.

The displayed works of Vietnamese artists belong to a collection of Dutch entrepreneur Geert Steinmeijer who had been to Viet Nam many times during the years between 1990 and 2010.

With his strong passion for art, Steinmeijer opened a private museum with his own funds and with the motto of connecting artistic emotions. He regarded the museum as his own "child", according to the Thế Gioi va Viet Nam (The World and Viet Nam Report) newspapers.

Many paintings have been showcased since 2020, but this is the first time he has exhibited the entire collection, mainly lacquer and silk paintings.

With the theme "Vietnam: The Dreamed Paradise" chosen by the collector, the exhibition aims to introduce an optimistic and poetic life in a heroic, optimistic, and hopeful history period of the Vietnamese people.

The exhibition, which remains open until April 2022, consists of three parts: “Vietnamese Identity”, “Vietnamese Women” and “Paradise on Earth”.

The second part displays portraits of women from different angles of beauty from the royal to urban gentle appearances, poetic and dreaming to hardworking in the field.

And finally, the third part reflects the working and fighting life during wars of Vietnamese people including posters paintings and books on female housework published from years of war in Viet Nam.

On a ceremony held early this month to open the exhibition, Vietnamese Ambassador to the Netherlands Phạm Viet Anh attended and cut the ribbon.

Viewers at the exhibition all felt the friendship, love and understanding of the businessman as well as Dutch friends for Viet Nam, and above all, the pride of Vietnamese people about Viet Nam -- their heroic land -- which just celebrated its 76th National Day (September 2), the Thế Gioi va Viet Nam reported. VNS