Cassava has long been popular among the Vietnamese, particularly mountaineers who know how to make a number of tasty and delicious dishes with it such as banh sắn (cassava cake), xoi sắn (sticky rice with cassava) and others.

Before the country’s đổi moi (renewal policy) started in 1986, Viet Nam suffered a severe shortage of rice due to prolonged wars so many families had to eat cassava instead.

As a mountaineer in the northern province of Cao Bằng, I will never forget the cassava dishes cooked by my mother. They included sắn hấp (steamed cassava), che sắn (cassava pudding) and banh sắn nưong (grilled cassava cake).

As the oldest child of my family, my mother would often ask me to cook the dishes with her.

Steamed cassava is the easiest dish to cook. We had a six-member family so my mother often bought two kilograms of fresh cassava. She would ask me to peel the root’s skin, cut it to 15cm lengths then soak it in light salt-water for three hours. 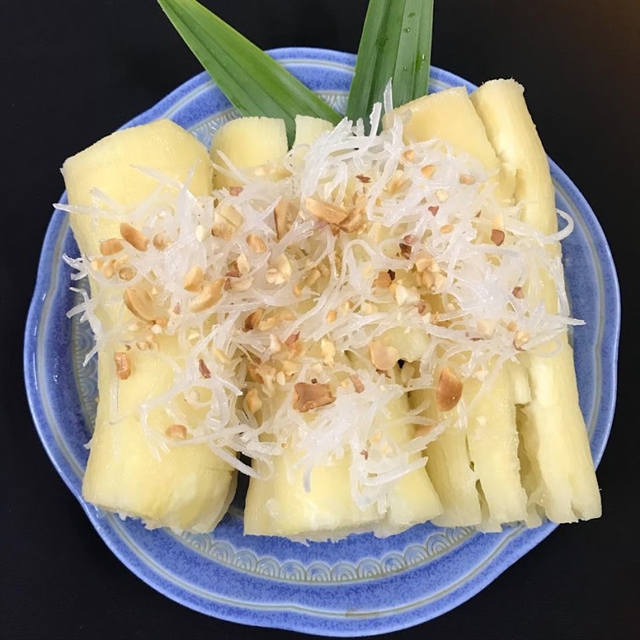 Steamed cassava is a popular and familiar dish of the Vietnamese. Photo webtretho.com

My mother told me that if we soaked the root less than two hours it would be bitter. “There are people have had suffered poisoning,” she would say.

The soaked cassava roots were arranged in a steamer to cook over a big fire for 10 minutes then a small fire for another 10 minutes before being topped with half a teaspoon of salt or two teaspoons of sugar. We would then wait until it was warm to eat.

The steamed cassava was soft, fragrant and rich, with a sweet or light salt flavour. We all enjoyed it so much.

Apart from this dish, which was our daily breakfast, my mother sometimes cooked xoi sắn, che sắn and sắn nưong.

Mixed sticky rice with cassava is a tasty dish that attracts many. Photo worldpress.com

The cassava should be processed as above and cut to pieces the size a thumb, while the sticky rice should be soaked in water for five hours, and then mixed together with half a teaspoon of salt, put it in a steamer and cooked for half an hour.

The minced onions should be fried in pork fat and topped over the mixed sticky rice and cassava in the steamer, and then cooked for five minutes more.

The dish is more enjoyable when topped with roasted peanuts.

In the past having a bowl of sweet pudding was a luxury because during the country’s subsidized period we were distributed only 100 grams of sugar per person per month, so my mother often spent it for big anniversaries or holidays such as Tết (Lunar New Year). However, sometimes she would make us happy by cooking cassava pudding.

Ingredients for the dish included fresh cassava, 0.5kg of sugar, and three tablespoons of cassava starch.

The cassava should also be cut as into thumb-sized, then soaked for 3-4 hours and steamed well. Boil one litre of water, then put the sugar in the pot until it boils again before putting the steamed cassava in.

Mix the cassava starch with a bowl of water and pour it into the same pot and top over up with ginger threads.

Oh, the dish was sweet, fragrant from the ginger and the cassava. Each of us was allowed to eat only a bowl because my mother saved two bowls for our neighbours who sometimes gave us something tasty too.

Although we loved pudding, the dish that we liked most was banh sắn nưong (grilled cassava cake).

The cassava is always soaked as mentioned above. After steaming it is grounded and mixed with coconut juice and coconut threads plus several tablespoons of sugar, then put in a frame. The cake is as big as a child’s palm. After framing, the cake is then grilled.

The completed cake is yellow in colour, and so tasty that none of us could stop enjoying it.


Many gourmands are interested in grilled cassava cake. Photo kenh14.vn

Today, people in rural or urban areas enjoy dishes made from cassava, but in the past those in the cities had less opportunity as there were few means of transporting the cassava from the mountain regions.

“The cake is crispy with an aromatic flavour from the dumplings. The cake’s spicy characteristics have made me addicted. I enjoy it very much,” Khai said. VNS