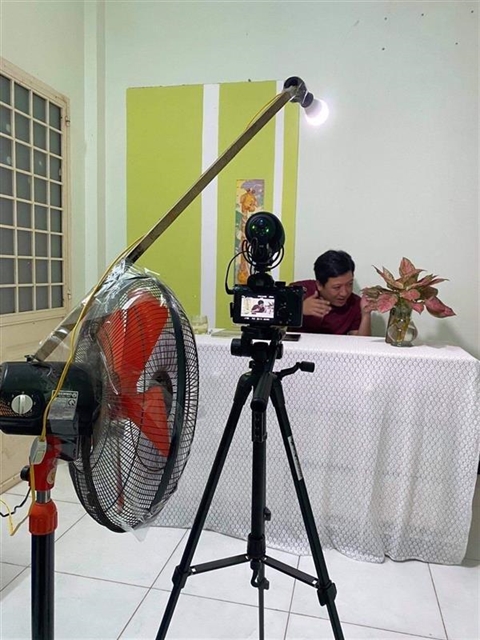 In order to fulfill their schedule and serve audiences, they have decided to create shows with at-home editions.

Trieu Thế Hiep, a representative of Đong Tay Promotion, one of the country’s leading TV production companies, said: “Although we are facing a tough time, our staff are trying their best to offer ideas to adapt to current circumstances.”

After discussion, the company decided to film at home, starting with game show Nhanh Như Chop (Lightning Quiz), a Vietnamese version of a Thai show where contestants must answer questions within two minutes to win.

Nguyễn Thanh Vinh, Nhanh Như Chop’s producer, said: “It’s the first time the artists have to become technicians. They must set up machines, adjust frames, filming and sound recording. Sometimes the internet connection is unstable and causes video calls to shut down.”

He said that it takes a lot of time to produce one episode. “Filming at home is a special experience for our staff and the artists. I hope the audiences understand our work and ignore imperfect details.”

The first three episodes of the at-home edition of Nhanh Như Chop received encouragement from audiences after it began airing on HCM City Television’s HTV7 channel early this month.

YouTube viewer Phu Nguyen said that he gave 10 points for the show’s production team, Giang and other guests who have made great efforts to bring entertainment programmes to audiences during the pandemic.

Giang said: “Life without laughter is no life at all. No matter how hard the situation is, we should face it with strong minds and head forwards to positive things. We, the artists, are trying our best to bring laughter and useful knowledge to home audiences.”

The artists in the show encourage audiences to stay strong and safe, and to strictly comply with the Ministry of Health’s 5K prevention protocol.

Hiep of Đong Tay Promotion said: “We are so lucky that our show has gotten attention, sympathy and support from audiences, which has motivated us to continue producing at-home editions of various shows.”

These new shows are expected to air soon.

Many television stations have announced they are suspending the broadcast of a number of game shows due to the pandemic.

HTV decided to change the premiere of the second season of Running Man Vietnam, one of the most popular TV reality shows in Viet Nam in 2019.

The show was expected to air in July, but will be rescheduled to September.

The 15-episode show is adapted from South Korean reality-variety show Running Man in which participants complete various missions in urban areas to win the race.

The show began filming in April in HCM City and will travel to famous destinations in Viet Nam such as Phu Quốc, Sa Pa, Đa Nẵng and Ha Noi. But it had to stop filming due to the pandemic.

According to the producers, as HCM City has carried out strict social distancing under the Government’s Directive No 16, the show cannot continue filming and dance crews cannot gather for training.

Hiep said: “While the broadcast of many shows must be temporarily delayed, filming at home is the best choice during this tough time.

"We know that we have to face many difficulties and obstacles filming at home. The shows may not be perfect as usual, but we are working hard to make them as good as possible.” VNS