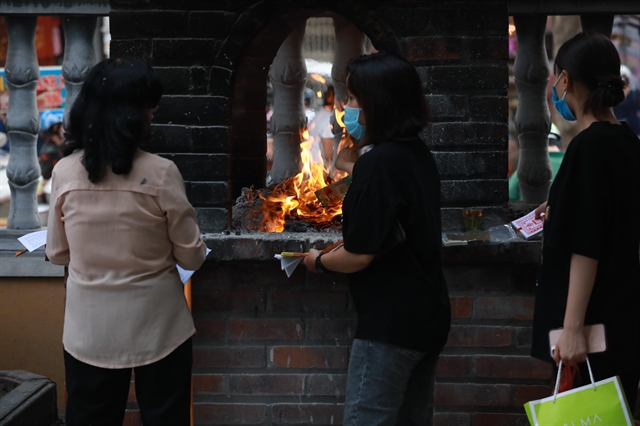 Everything needs to change with the times, even auspicious festivals that are centuries old. And so it is with Viet Nam’s Ghost Festival (Tết Trung Nguyen), which falls Sunday.

The festival, on the 15th night of the seventh Lunar month, occurs during what is colloquially known as Thang Co Hồn - the month of lonely spirits - a time viewed by many with a certain suspicion and unease. Some go to great lengths to avoid the very particular bad luck that comes at this time (am khí), including but not limited to not going out at night, postponing wedding plans, refusing to say the names of good friends and family aloud and, certainly, refraining from buying a house.

Legend has it that now is the time that the gates of hell were opened and those within it were pardoned becoming wandering ghosts, for a full month. These tormented souls were left to, once again, roam the mortal earth and seek out their families.

Naturally, it is also a time that those on earth decide to pay their respects to those no longer with us. Depending on belief and region, families across the country will lay out a banquet of vegetarian foods, on altars at home or in temples, for the hungry ghosts to feast on. Another part of the festival is the burning of paper money by way of an offering to these wandering spirits.

But over the last few decades, things have changed. It’s not just cash that is being lit up as an offering, but anything a much-loved ancestor could conceivably need: iPads, air-conditioners, servants. You name it, someone somewhere in Viet Nam is burning a papier-mache model of it. So, if you see someone blazing up a miniature Mercedes this weekend, you know why.

The fires have got so intense that the green lobby are attempting to ban such burnings on account of what they do to air quality. Even the Vietnamese Buddhist Sanga are getting in on the act, and have called for a halt on the ritual bonfires for being wasteful.

But this is all old news. Who cares about burning paper iPhones for great-grandad in the midst of a global pandemic? Now, it is no doubt up for debate whether the coronavirus, persistent as it is, has actually managed to permeate heaven, hell or any other spiritual realm. But with new variants coming thick and fast, it is surely best to be on the safe side. And so it is with this in mind that the Vietnamese, in their never-ending ingenuity, have come up with a completely new offering: votive vaccine kits. Apparently, they are all the rage.

Your average incense dealer can now provide you with a miniature paper syringe with two – unmarked – vials of coronavirus vaccine. So, if you have not got around to having your jab yet, you can at least make sure your ancestors can. This begs the obvious question: are ghosts vaccine snobs? You can imagine the conversations down at the pub for lost souls as we speak.

It will probably go something like this: “My descendants sent me an offering of the AstraZeneca vaccine today, they must really love me.”

“That’s nothing, mine have not even bothered. They are so patriotic, they are waiting for the COVIVAC vaccine to be released. That’s true love.”

Fictional conversations between vaccinated ghosts aside, the cutesy paper vaccine kits have been met with raised eyebrows and a certain amount of cynicism by sections of the Vietnamese public.

“Oh god, this is just a creative selling pitch,” Trần Thanh Thuy, an NGO worker, told Viet Nam News. “It was concubines, horses and nice vests in the old days. Then they upgraded to US dollars (the currency of the underworld bank), fancy cars and four-story buildings.

"The joss paper artists are just like anyone else when it comes to selling things. Another trendy industry.”

In a strange quirk of fate Sunday actually holds two festivals in Viet Nam, though they have become inextricably linked in the public consciousness. It is also Vu Lan, a time for people to pay respect to their parents, particularly mothers.

It is said that when an ancient Buddhist disciple received deep spiritual powers and set out to find his deceased mother, he found she had been reborn in a ‘lower realm.’

Accordingly, she suffered great hunger and her stomach was swollen like a drum, her mouth the size of a needle. Distraught at his mother’s suffering, the disciple asked Buddha for advice, who told him on the 15th day of the seventh lunar month he must make offerings to the Sangha and pray for his mother.

Vu Lan has been a time to honor your parents ever since. In Viet Nam today, people often make offerings of (or wear) a red rose for a living mother or a white rose for a deceased one.

However, you spend Tết Trung Nguyen, whether it is musing on wandering ghosts, delaying marriage, or burning paper vaccines, it’s worth remembering that we live in tough times, and it would do no harm to spend a little time on this most venerated of days to try to help others, whatever their difficulties might be. VNS