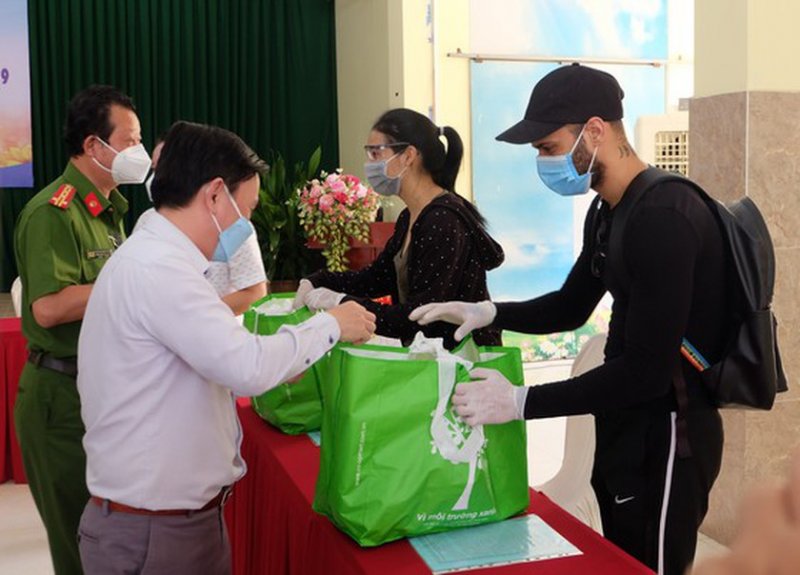 The Steering Committee for Covid-19 pandemic prevention and control of Thu Duc City held a meeting with 25 foreigners from different nationalities who are teachers, chefs and workers facing difficulties due to the prolonged fourth Covid-19 wave.

On the occasion, Thu Duc City gave 25 gifts for them worth VND500,000 (US$22) and VND2 million (US$88) in cash in support.
Speaking at the meeting, Chairman of Vietnam Fatherland Front Committee of Thu Duc City Tran Huu Phuoc stressed that the Covid-19 pandemic had hugely affected the people’s lives in the whole country in general and in districts of Ho Chi Minh City and Thu Duc City in particular.

Currently, the HCMC and Thu Duc City authorities are trying their best to impose strict measures to prevent and control the pandemic development heading to protect the health of local people and foreigners living in the city and to soon achieve the new-normal.

During the passing time, foreigners living in the city launched a project named “Vietnam We Thank You” to send thankful messages to the frontline forces in the fight against Covid-19, added the leader. On behalf of Thu Duc City authorities, Mr. Tran Huu Phuoc hoped that the foreigners would continue to support the city’s policies on Covid-19 prevention and control measures.
Johnston Gareth Alexander, a New Zealand citizen, expressed his thankfulness to the city authorities and Vietnamese people who had always taken care of him as well as provided him essential food during the social distancing.

Same as Johnston Gareth Alexander, Danny Ray Draughn, who is an American teacher, has lived in Thu Duc City for nearly ten years. Since the Covid-19 outbreak in Vietnam, his income has been hugely affected by the pandemic. He was very touched by the local authorities’ concern.