While social distancing is crucial to prevent the spread of COVID-19, having to stay at home most of the time is not a comfortable experience.

To make use of her time in isolation, an artist in HCM City is making and selling her work to help people in need.

Sofia Holt from Sweden is auctioning her work online to raise funds for charity.

The idea came to her as she was stuck at home in a small, blocked off area of the city.

“A lot of my friends that have food businesses, they started to cook meals and to give out to the workers on the frontline who support with COVID and also to give to families that don’t have food,” she told Vietnam News. “And I was thinking, ‘OK, so I’m locked in here in quarantine, I can’t do much. I’m a designer and an artist – so what can I do?”

In her apartment she had a lot belongings and everyday home items, so Sofia decided she would paint them and sell them to raise funds.

At first, she thought about selling each piece through Facebook groups, but decided an auction would be a better option.

The objects painted are everyday items such as a fan, a dish, a pair of shoes, some chairs, stools, and photo frames. They were all named after the people Sofia said she missed, and those that inspired her.

Bright colours were used, and the finished pieces have a playful style, which Sofia hopes will help to make people feel happy.

“It’s a really sad time now, and the project is for really sad things. But hey, we need to keep our spirits up!” she said.

“It just makes me happy to have a lot of colours around. But I’m also a Scandinavian designer, so the patterns are still a bit simple. Some of the objects have more decorations but some of them still have a clean look.

“I also wanted the designs to be interactive, because when you sit in quarantine you have nothing to do, so two of the chairs are inspired by games. One has a chess board on top, and the other one has a labyrinth.”

She uploaded photos of the objects to an online form, where people can go to place bids and state which charities they want to donate to. Sofia hopes she will be able to raise at least VNĐ26 million (US$1,136) and maybe more.

“I hope it can be like over 90 million, if we have something really interesting art lovers (to bid),” she said. “Actually, they don’t even need to like art, because they can just want to give to charity. In one way, the object is not the central subject. In one way, the charities, giving to charity is the central subject in this project. But they are both going alongside.”

Having painted all her life and received formal training as a designer, Sofia is no stranger to fine art and has the ability and skills to control how her art will look. But to her art is not associated with prestige, and when it comes to painting, she wants people to let go of the pressure and expectation to do it perfectly.

Painting ordinary, easily found home items is not only to make use of the free time and limited resources she had in isolation, it is also a way of encouraging people to pick up the brush and “paint anything”, she said. 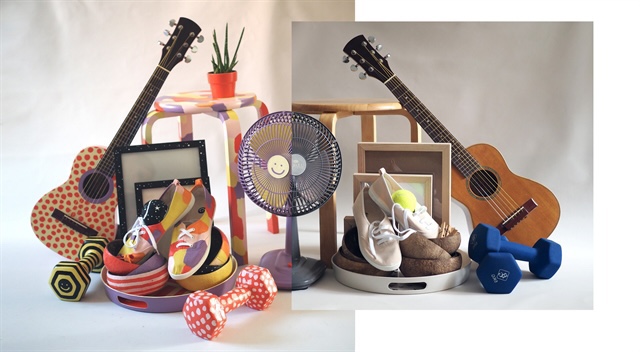 The time for bidding should have ended at the beginning of August, but Sofia extended it to the end of the month so more people can know about the auction and do their bits for charity.

She hopes the project will illustrate how art can help society in difficult situations.

“For the artists, I hope they do art to give to charity,” she said. “But also for the normal people, I hope that they can see that they don’t have to buy new stuff. They have furniture at home that they don’t like anymore, or clothes, or whatever, like a hair clip. So if you have something, instead of throwing it away, just paint it. And just put some colours to your life.”

By Bao Hoa. This story was first posted here