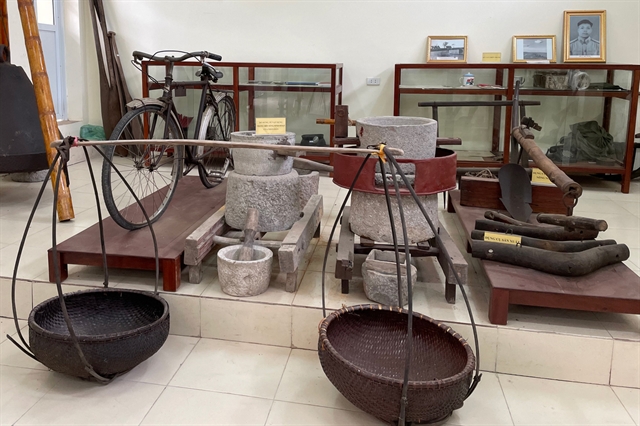 Hundreds of antique objects have been donated by residents in Yen Mỹ Commune in Thanh Trì District to transform the commune’s Memorial House into a museum. — Photo laodong.vn

HÀ NỘI — Locals in a suburban village in Ha Noi have set up a museum to maintain the memorabilia of their village’s history.

Hundreds of antique objects have been donated by local residents in Yen Mỹ Commune in Thanh Trì District to transform the commune’s Memorial House into a mini museum.

Dubbed “The Place where Time Stands Still”, the 150-square-metre venue now displays objects and documents showcasing the village’s development over the past centuries.

Visitors can find objects related to life in the village’s past such as hundred-year-old chinaware, wooden meal trays, clay pots and brass sinks.

Farming tools and household items that are hard to find today, such as stone grinders, bamboo bailing buckets and bamboo cupboards are also on show.

According to the Chairman of the Yen Mỹ Commune Trần Quang Khanh, all the memorabilia displayed at the museum demonstrate not only the daily activities of Northern villages, but also different periods of history.

“All these unique keepsakes are a meaningful bridge linking the past and present,” he said. Hand-written letters soldiers sent their loved ones during the American War as seen at the museum. — Photo vnexpress.net

Hand-written letters soldiers sent their loved ones during the American War, a Victory Medal of martyr Nguyễn Minh Tan, or an enamel soldier’s cup, are all evidence of a heroic yet severe time for the nation.

“Through these items, we can partly learn about the hardship, loss and sacrifice of the whole nation during that time,” Chairman Khanh said.

Items used widely during the subsidiary period (1975-1986) such as kerosene stoves, black-and-white TVs, Rạng Đong-labelled thermoses and food ration tickets are also on display at the museum. Museum caretaker Nguyễn Thị Hue stands next to a cupboard made from bamboo. — Photo laodong.vn

Nguyễn Thị Hue, 68, who has volunteered to become the museum’s caretaker, has also donated a 100-year-old ceramic vase.

“I'm happy with what I'm doing for the museum. Keeping my eyes on these memorabilia every day makes me recall many memories. That’s why, no matter how hard it is, I still want to be part of the museum, devoting my own little labour to serve the community,” Hue said.

In future, the village will continue to call on people to make donations, aiming to diversify the collection.

“Our goal is to turn this venue into a cultural spot of the area. This will also help younger generations to be proud of the historical and cultural traditions of their forefathers,” Chairman Khanh said.

“Other neighbouring communes have visited the museum to learn about the model. But so far, our museum is still the only one in the district.” VNS