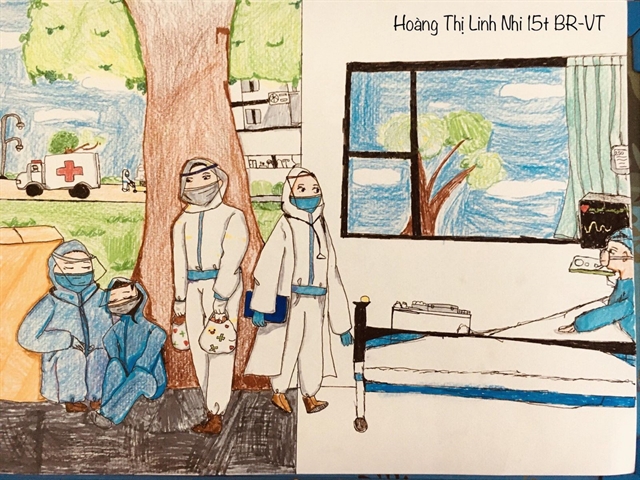 A painting by a contestant from Ba Rịa - Vũng Tau Province is part of the painting and writing contest Vì Mot Viet Nam Tất Thắng (For a Victory to Viet Nam). Photo courtesy of the organisers

HCM CITY — A painting and writing contest for child patients aged 4-16 nationwide has been launched in HCM City.

Vì Mot Viet Nam Tất Thắng (For A Victory to Viet Nam) was organised by Foreign Trade University and Hope Foundation, a non-government organisation, to give the highest chance of survival to children with cancer across Viet Nam.

The contest categories include painting, poetry, short stories, essays and letters, reflecting hope for a brighter future and conveying messages of love to frontline workers and doctors fighting against the COVID-19 pandemic.

The organisers have invited singer and music producer Ha Anh Tuấn to be the contest’s ambassador.

Tuấn, who has made great contributions to the COVID-19 fight, said: “While all people across Viet Nam have faced great challenges these days, paintings and literary works by children who are brave in their fight against cancer and incurable diseases will represent our gratitude to frontline forces who are devoting their life protecting all of us.

“These works will also send wishes to all Vietnamese people that the country will soon become peaceful after the pandemic,” said the 37-year-old singer.

Tuấn, a graduate of Technische Universitat Darmstadt in Hessen, Germany, rose to fame in the Sao Mai – Rendezvous TV singing contest in 2006.

He has released seven albums, including Acous’84, a production of nine R&B songs which helped the singer bring home the Golden Album of the Year presented by HCM City Television in 2010.

He works as a music producer for See Sing Share, which won Show of the Year and Music Series of the Year at the Cống Hiến (Devotion) Music Awards in 2019.

The show has had four seasons over the last six years, with a total of 40 music videos featuring Tuấn’s signature ballads and R&B songs which have been hits among Vietnamese youth for a decade, and favourite songs by other singers. His videos have attracted hundreds of millions of views.

Since the pandemic’s outbreak in Viet Nam last year, Tuấn and his friends have donated medical equipment and supplies, food, and essential items worth tens of billion đồng to hospitals, frontline forces and COVID-affected people.

The organisers will present a total of 12 top prizes and dozens of consolation prizes worth more than VNĐ100 million (US$4,360).

The winners will be announced in November. VNS