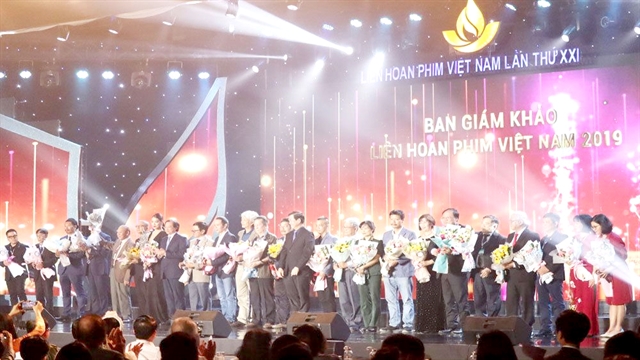 The 21st Viet Nam National Film Festival's jury received flowers from the organisation in the southern coastal province of Ba Rịa Vũng Tau in 2019. The 22nd festival will be rescheduled for November in the central province of Thừa Thien Huế. Photo congly.vn

The festival, the biggest cinema event in Viet Nam, has been postponed due to the continuing impact of the COVID-19 pandemic.

The festival has now been rescheduled for November 19-22 in Huế City, the central province of Thừa Thien Huế, according to the Ministry of Culture, Sports and Tourism.

“The postponement of the festival will give more opportunities for filmmakers to participate in the festival,” said People’s Artist director Đao Ba Sơn.

“It is not only that there will be more submissions to the festival but it also ensures safety.”

Under the announcement, festival organisers will continue to receive film submissions that are screened from September 11, 2019 to August 10, 2021.

Under the direction of Prime Minister Phạm Minh Chính, to ensure the prevention and control of the COVID-19 pandemic and to successfully hold the film festival, the ministry also decided to cut the length of event.

The festival programmes will include Panorama; Viet Nam Contemporary Films and Competition. Each category will include feature films, documentaries, scientific films and animation.

Golden Lotus and Silver Lotus prizes will be awarded for the best feature films, documentaries and animations. The country's best directors, playwrights and actors will also receive awards.

Apart from the screenings and competition, the film festival also comprises seminars on the development of the cinema industry.

The national film festival was first launched in 1970 and has been held biennially since 2007, honouring many films with high-quality content and artistic creativity.

The 21st festival was held in the southern coastal province of Ba Rịa – Vũng Tau with the participation of 16 motion pictures from the State-run and private studios.