Leading jazz artist Trần Mạnh Tuấn recently gave an unusual performance in HCM City playing his saxophone for thousands of COVID-19 patients and frontline workers at field hospitals No 3 and No 6 on July 24. He spoke to Bảo Hoa about the outdoor concert which he described as "the most special stage" he had ever been on in his career.

What made you decide to hold such a special performance?

I was contacted by a group of volunteers from the city’s youth union and youth culture centre. I was hesitant at first because I have underlying health issues – I have been taking medicines every day since I had a kidney transplant. But then, I thought I was an artist who had always been loved and supported by my audiences, and I also hoped that with my music I could somehow relieve the sadness and anxiety of the doctors, medical staff, frontline workers, and especially the patients under treatment there. So I decided to do it.

The atmosphere there was something that I thought only existed in movies. I never thought one day I would step into a scene like that and perform there. I got there early to do the soundcheck. When we finished checking we got a big round of applause from the doctors, nurses and patients. It was so loud. It felt like something had been broken and the depressing feeling evaporated. We felt like we’d all been drawn together. After that I felt like I had been given new positive energy. It made me stronger and I felt I wasn’t afraid of anything.

It was a very special auditorium, there were such vast spaces between the apartment buildings, and the feeling was also special. The stage was unique, and my audiences were also unique. 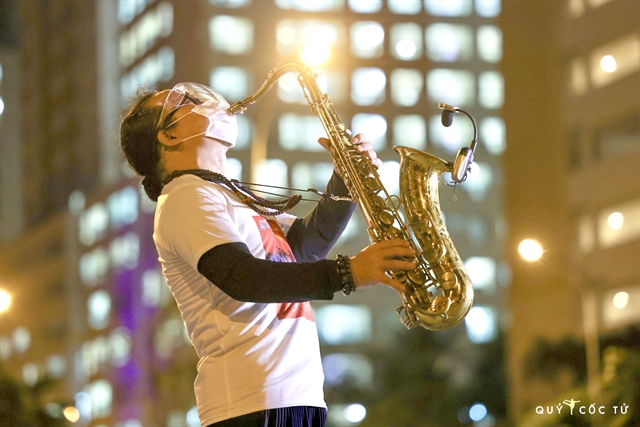 Saxophonist Trần Mạnh Tuấn performed at an outdoor concert for patients and medical workers at field hospitals No 3 and No 6 in HCM City on July 24. Photo courtesy of the artist

Is that the reason why you said on your Facebook page it was “the most special stage” despite having performed on many stages around the world?

I am lucky enough to have performed in more than 60 countries around the world. I’ve joined several music festivals and been on countless stages. I’ve performed for hundreds of thousands of people and sometimes for only a few. But this was the first time I got to perform in such a special setting. It never crossed my mind that one day I would perform under these circumstances. It was really unimaginable for me. While I was there, I saw medical staff in their protective clothing going to check up on patients, dim lights coming out from the apartments, and ambulances moving slowly, delivering and taking patients. It did feel a little distant and cold. But when I started to play the music and people cheered around me, it felt a lot warmer.

What songs did you play and what kind of feelings did you have during the performance?

I played Que Hương (Homeland), Về Que (Back to Native Village), Diễm Xưa (Diễm of Long Ago) and Còn Tuổi Nao Cho Em (What Time and Age for You). Those were the songs that I’ve been playing for more than 20 years. But this performance felt different. I was touched myself, and had tears in my eyes while I played. 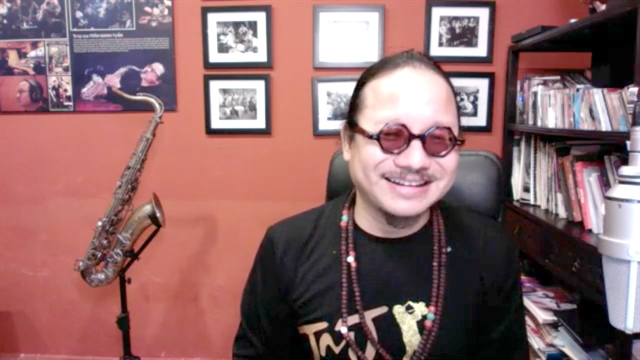 How did the audiences react to your performance and what did it tell you about the power of music to humans during difficult times?

It’s incredible. There were thousands of patients and hundreds of doctors. They all took out their phones and started filming and cheering. For a moment there it felt like they had forgotten all the struggles and difficulties they experienced for many days, and all that was left was the excitement brought about by the music and songs. To me that was like providing them with a medicine. Together with the doctors’ regimens, music is like a medicine that helps to heal the soul somewhat.

I believe many of the doctors and patients were not born and raised in HCM City. They came here to work, to live, and now they’re stuck here in a very sad time. So when choosing songs to perform I wanted to choose those that have a strong sense of sympathy that people could somehow identify with. I hoped they would be able to find what they were missing and longing for in the songs, the lyrics, because they were such popular songs that everyone knew.

You live in HCM City, the epicentre of Viet Nam's fourth wave of the COVID-19 pandemic. What would you like to say to people so we can get through this difficult time?

Not only me and all the volunteers, but I think at the moment everyone wants the pandemic to be over soon, and we can go back to our normal life, seeing each other, enjoying live performances, and those who have not seen their families for a long time can go back home. We should, together, comply with all regulations by the city’s and country’s authorities. Let’s abide by the rules, as strictly as we can, so we will soon get over the pandemic. VNS