The video showing Vu Van Nam's process of making and testing a homemade Bugatti Chiron has attracted international attention. The car was mentioned on US Hotcars website. 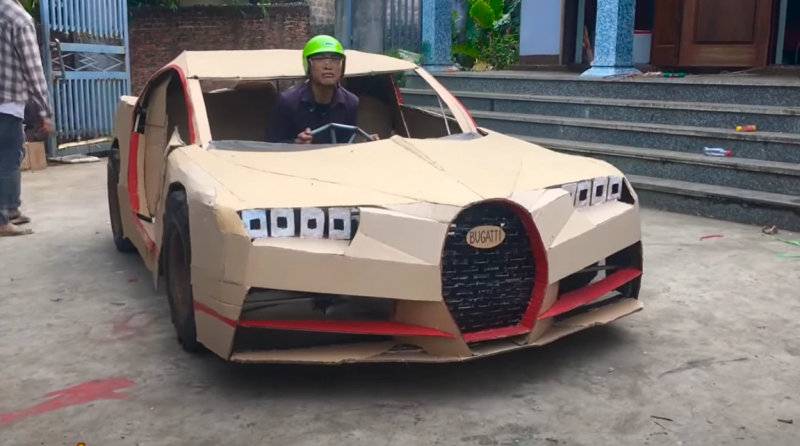 A couple of young Vietnamese petrolheads built this replica Bugatti Chiron by laying cardboard over a wireframe and cobbling the rest together from old bicycle parts. And believe it or not, it is modeled on a real Bugatti, according to DriveTribe. The pair worked around the clock, using photographs of the car that sells for close to $3 million, in order to get the details as close as possible.

An interesting thing to note about their Bugatti build is they have opted for a new, wider wheel design. The Ferrari appears to use those gaudy motor scooter rims that all the teenagers in Vietnam love to put on their bikes, but for the Chiron they have chosen a more heavy-duty option - possibly due to the higher anticipated top speed.

With not much room to mount a quad-turbo 16 cylinder engine like the real thing, and with a few spare bicycle parts left over, the pair made their homemade Chiron pedal-powered, making this the cheapest, and most environmentally friendly Bugatti Chiron ever built.

According to Hot Cars, Nam has to inspect the welds on the frame where the engine is attached to ensure his makeshift Bugatti Chiron is safe enough to drive. He'll also need to clean the Toyota engine being used, which he plans to paint silver.

The first job entails hoisting the engine out of the rear section of the frame, then flipping the chassis on its side to inspect the welds. Once they're acceptable, one of Nam's friends gets to work spray painting the entire frame black. Meanwhile, the rest of the crew get to work on applying solvents to the exterior of the engine. Then it's a matter of putting all the components back onto the frame, from the engine and drivetrain to the suspension and brakes (taken from motorcycle parts).

"There will be many people wondering why we don't fix the inside of the engine," he said. "We don't know much about car engines, so we can only deal with the outside part of it. If we need to clean the inside of the engine, we will need a lot more time to learn more about it." Nam has completed about 70% of the car's body, while still working on the frame and engine. 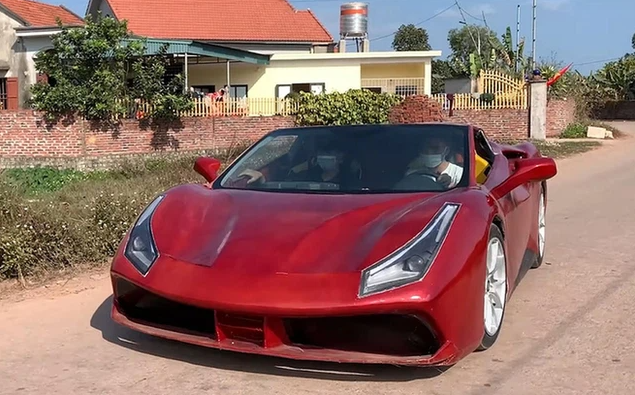 Hot Cars appreciates Nam's homemade car and that he posts videos of the making process on his Youtube. If the Vietnamese guy successfully with the Youtube channel, he can earn enough to buy a real supercar someday, the website predicted.

The Chiron is Nam's team's third supercar build, having previously built a homemade Lamborghini Aventador and Ferrari FXX. The team members are quite young, most of them are from 18-23 years old. Working as farmers and have not been professional training in engineering, they only study photos of real cars and make their models from cardboard.

Previously, when answering domestic press, Vu Van Nam said there were foreign customers who wanted to buy his products. For example, men from Dubai, Egypt willing to play US$ 1000 to own his cardboard car. 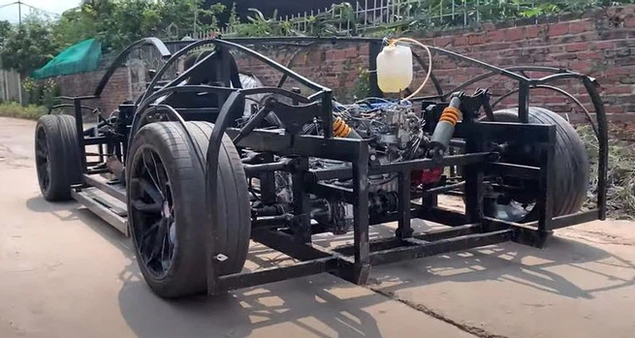