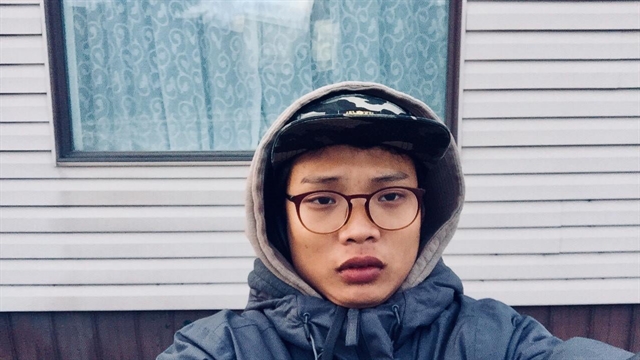 Ròm was the first Vietnamese film to win the top award in the New Current section at the Busan International Film Festival in 2019 and the best first feature film award at Fantasia IFF 2020.

Khoa is currently studying film production at Confederation College, Canada. He spoke to kenh14.vn about his role in Ròm.

The best actor award is the third international award for Ròm. How was your character in the movie meaningful to you?

This is a very gentle character. He is sentimental and he understands the value of a family having both a father and mother.

As his family breaks up, he has to earn a living by himself with the desire to have enough money to find his family again.

However, he easily trusts people. I think that the most important thing is to believe in yourself and know what is right and wrong. Don't trust people as much as Ròm does.

The movie conveys a message to never stand still or stop because time flies. I think I can't lose my youthful years like the characters in the movie. The director was your brother. How did you support each other?

Certainly, we are helpful to each other. In pre-production, I helped him look for a location and actors. When shooting finished I also helped him in post-production.

What I like the most is to be free to get to know what happens and what I want to know more about moviemaking. This movie had many cameras and I had the chance to borrow and touch cameras.

The movie revolves around the life and fate of street children selling lottery tickets. How did you prepare for the role?

My experiences more or less influenced my acting although I don't remember specifically what story or case it was.

But when making a movie, don't let your emotions affect your acting too much because they will make you lose control of what you're doing.

What do you remember the most about making the film?

Ròm was made across eight years. It is a very long time so there are a lot of sad and happy memories.

I remember a scene that I had to cry my heart out in. But I couldn't cry even though everyone tried to help me in different ways. After two days of filming that scene without success, the crew decided to leave it until the end.

The movie has many action scenes and my bare feet touched the ground a lot and they were injured and bloody.

You are currently studying film production in Canada. Were you inspired to be a filmmaker by the movie?

I was impacted by the short film 16:30 before. Ròm was developed from 16:30 which was the director’s graduation thesis.

And I knew basically how the crew would make Ròm. At that time, I was interested in it and I made my choice to be a filmmaker but not an actor.

Surely, I will make a film like Ròm. I hope to make a film by myself or help my friends tell their stories through moving images.

I think that most filmmaking students have a deep story they want to tell to people through a movie. Absolutely I will make an impressive movie from my heart.

Will you return to make films in Viet Nam after graduation?

Viet Nam is my homeland with my memories. I was born and raised in HCM City, a place that has given me a lot. If you want to never forget those things you have to make a movie. — VNS