These days he has more free time to create new designs for new orders from overseas.

The pandemic has resulted in a 90 per cent order reduction from his partners, who are mostly in Japan.

This year, his firm, Thai Lien Handmade, has only recorded revenue of US$6,000. 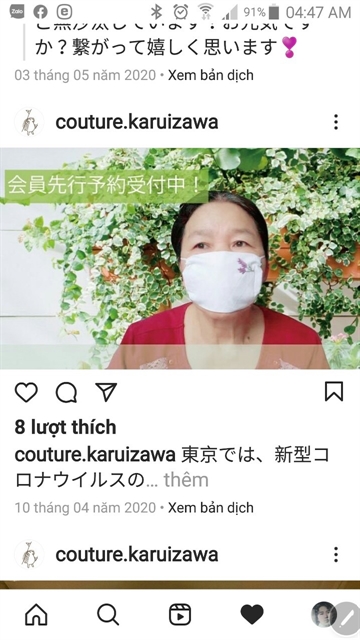 Due to the sharp decrease in orders, his 60 embroidery workers can only work when the company has orders.

Le Thị Thu, one of the most experienced workers in Luan’s company, told Viet Nam News she felt frustrated as her work has been caused difficulties by the pandemic.

Her husband, a stone carver, has also experienced a salary reduction.

Thu said her family needs some VNĐ6 million ($260) for food and other fees per month, excluding extra tuition fees for her two children aged 15 and 10.

“We have had to spend less on everything,” Thu said. “I have not been able to afford daily milk for my two children since April last year. We have also cut down on fruit in our diet.”

Thu said she raised chickens and planted more vegetables in her garden to eat and sell at the local market. 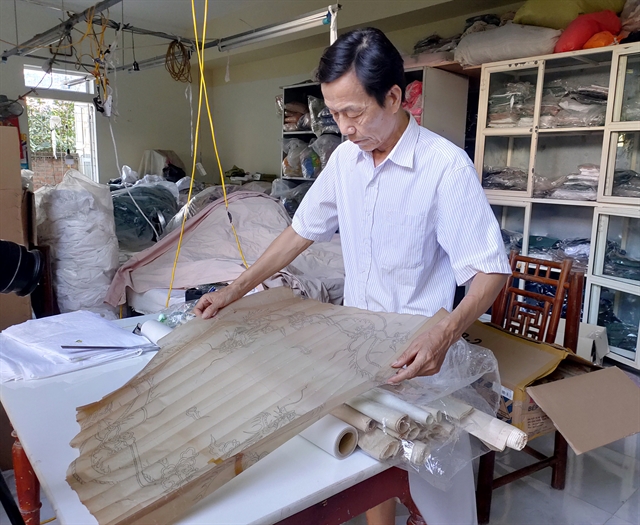 “We only now hope to have more orders to get a stable salary, which is a way to stay longer with and preserve the traditional embroidery handicraft,” she said.

They are among the rare embroidery artisans of famed Văn Lam embroidery village, which is located at the entrance to the Tam Cốc - Bích Đong Tourism Site in Ninh Hải Commune, Hoa Lư District, in the northern province of Ninh Bình.

Luan, who has also been acting as chairman of the village’s Artisans’ Association, said three of the five members of the association have still secured enough orders to maintain production.

“In the first months of the pandemic last year, we were extremely worried as the material sources from China were stuck at the border gates,” she said. “But then things have run smoothly again. Our customers in Europe still send orders through emails.”

The orders now account for 70-80 per cent of those in a normal period. The company’s 45 workers are still working full time as usual.

“Besides bedding sheets and tablecloths for export, we have produced lots of masks from natural materials like silk and linen for foreign customers,” Yến said.

“I have spared no efforts to maintain our team of core workers,” Yến said. “I receive all small and big orders to bring jobs for them.” Yến said the company has got no income from tourism since the outbreak of the pandemic, which previously accounted for 5 per cent of the company’s income.

“We are actually in need of cash as now we must wait for the customers to pay for the orders to have enough money to pay the salary of our workers,” Yến said.

She said she had to postpone her plan to build bungalows at her company complex of 7,000sq.m to make a new tourism centre by Tam Cốc Wharf by offering guests the chance to try traditional embroidery production at her workshop, which would cost some VNĐ20 billion ($869,000) to set up.

“I know that myself and other workers here are luckier than many others in the village, who had to find other jobs to earn money,” said Bui Thị Thu Hiền, a worker at Minh Trang Company.

"The company has done everything to maintain our salary and give us jobs suitable to each person’s capability."

According to Đinh Anh Toi, deputy chairman of Ninh Hải Commune's People's Committee, 90 per cent of the total 2,000 local embroidery workers have found other jobs to earn money.

“Local authorities have helped embroidery enterprises get closer access to favourable capital sources to maintain production or change to other businesses,” he said. 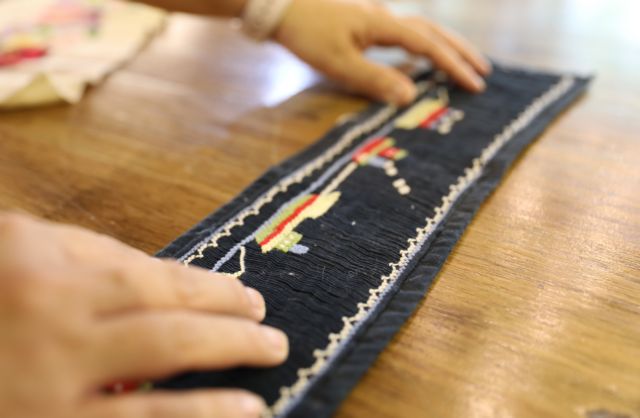 Local authorities have also hosted training courses for young workers in embroidery and also those who want to work in industrial zones.

Toi said more than 400 out of 600 local people working on tour boats at Tam Cốc Tourism Site have received the first dose of the COVID-19 vaccine with the support of Xuan Trường Enterprise.

What brings Luan happiness these days is that he has realised his dream of renovating the local temple dedicated to the ancestors of the handicraft using funding it took him 18 years to raise.

“We have pulled down the worn-out temple, which is situated right at Tam Cốc Wharf and built a firm foundation for the new one,” Luan said.

The place will feature the golden time of the handicraft, with various embroidery patterns carved on stone and wood, he said.

“Now in the time of technology, fewer and fewer locals still keep the handicraft handed down through generations,” Luan said. “In the future, the career may no longer exist but the temple will remain as a relic site reminding people of cultural heritage.”

Historical documents say local embroidery skills have been handed down through the generations for more than 700 years. 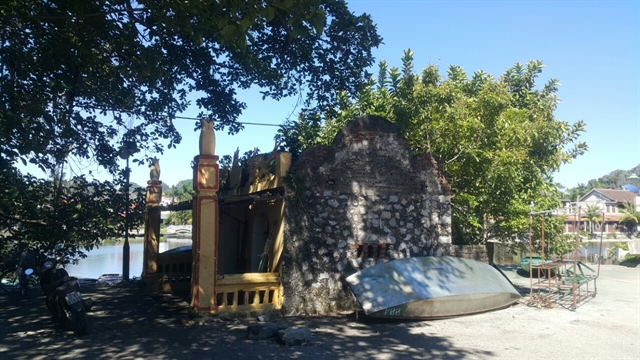 The old temple dedicates embroidery ancestors, which has been pulled down for a new one. — Photo Courtesy of Vũ Thanh Luan

Villagers then became specialists in embroidering royal costumes and costumes for rituals.

In 1910, during the French colonial time, brothers Đinh Ngọc Henh and Đinh Ngọc Xoan went to Ha Noi to study French embroidery skills and then passed them on to the village folk.

The village's embroidery artisans have created more lace designs inspired by European tastes since then.

The village is now home to nine companies and dozens of workshops gathering together 700 households in the craft. Revenue from the trade each year reached some VNĐ80-90 billion (US$3.4 million-3.8 million) before the pandemic. — VNS