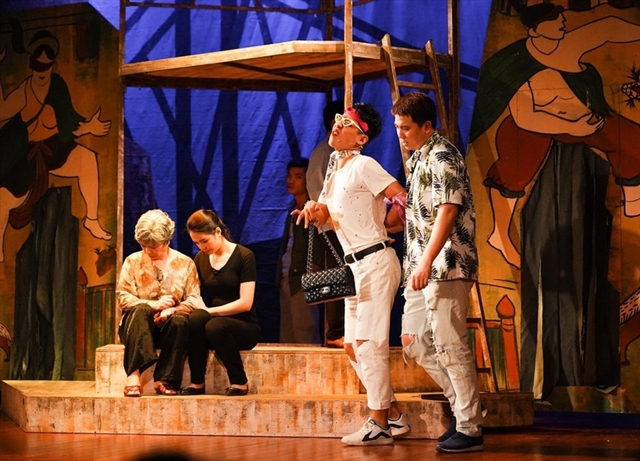 Artists of the Youth Theatre rehearse a play while waiting for the theatre to reopen.  Photo tienphong.vn

HÀ NỘI -  Although all theatres have had to close to prevent COVID-19, artists still rehearse for new plays, waiting for the day they can return to the stage.

For the Youth Theatre, summer is the peak time for actors as they perform a few times a day. However, due to the pandemic, the theatre has been shut for several months. Since the beginning of this year, the artists have put on just a handful of performances.

This is also a problem for many other theatres.

“Our artists are very impatient because they have not been able to work for a long time. During past months, instead of the nightly scene with hundreds of viewers, we now see only a few staff working night duty. It’s so sad to look at our schedule, seeing our shows have been cancelled one by one,” said the Youth Theatre’s deputy director Sĩ Tiến.

Although the artists haven’t seen an audience for months, they still need to practice hard.

“Before the pandemic, we were rehearsing the play Bầy Chim Thien Nga (The Flock of Swans). We were ready to sell tickets but the pandemic has turned our performing schedule upside down. However, the artists still need to practice the play, expecting that they will have chance to debut it soon,” Tiến said.

He said that in the current situation, all theatres need to change their performance plans.

“Last year, after re-opening in May, we immediately achieved success as our artists rehearsed and staged a number of consecutive performances, he said.

“This year, due to the pandemic, the artists need to improvise and be more flexible."

Like the Youth Theatre, the Viet Nam Circus Federation also closed its doors. However, the circus artists haven’t stopped their daily practice routines.

Deputy director of the Viet Nam Circus Federation Tống Toan Thắng said that all artists are always ready to be on stage.

The circus play Biet Đoi Anh Hung (The Hero Squad), which was supposed to debut on Children's Day, June 1, has been postponed until the Mid-Autumn Festival in September.

“Although the performing schedule has been changed significantly, even cancelled, the artists are still practicing for other shows according to our annual plan,” Thắng said.

Thắng, who is an international award-winning circus artist, said that the fourth wave of the pandemic has had a serious impact on every individual, especially his employees.

“If we are allowed to re-open, I think we need a certain time until we can draw our fans back to our circus stage,” he said.

“Anyway, we need to adapt to the new situation. All stages have to find suitable solutions to overcome the difficulties and to pull audiences back. This can only be done when the pandemic is controlled, then the viewers are no longer afraid of the disease and the economy starts to stabilise,” he added.

To adapt to the current situation, the Viet Nam Drama Theatre has their own initiative in using social media.

Theatre director Xuan Bắc has directed a group of young artists to create a series of short performances to present on TikTok, aiming to promote the theatre and their activities.

The Youth Theater has also selected a number of drama excerpts as well as children's songs to post on their Facebook page.

"That is the way we want to share our art activities to a wider audience," said the theatre’s deputy director Sĩ Tiến.

For the Viet Nam Circus Federation, which hasn't paid much attention to social media, its deputy director Toan Thắng has said the federation will be more active on this platform to interact with audiences.

However, the theatres do not have to manage on their own in this difficult time.

According to deputy head of the culture ministry's Department of Performing Arts, Trần Hưong Dương, the department’s representatives have discussed with some theatres and Viet Nam Television to present some stage productions on TV from July.

"The department will cover a part of those theatres’ production costs. Instead of in-person plays, we will present them on the TV screen,” Dương said.   VNS