Fourth of July: It will be closer to normal than it was in 2020. There are many fireworks shows, celebrations and parades taking place across the US. Here are some best suggested activities and top places to enjoy them on this special day.

Many modern Independence Day traditions stem from America’s early independence celebrations. People would attend bonfires, concerts, and parades to celebrate their new nation. It was also common for the Declaration of Independence to be read aloud, followed by muskets and cannons firing. It’s safe to say the earliest Americans celebrated the 4th of July loudly and proudly.

Over time, those traditions evolved and became the Independence Day traditions we know today. Let’s take a look at these 4th of July traditions (and don’t forget to include them while planning your celebration).

4th of July fireworks - Whether you buy your own fireworks or watch a local fireworks display, lighting fireworks is a long-standing tradition for Americans on the 4th of July. Many people love to celebrate Independence Day with a bang!

4th of July sparklers - These hand-held fireworks are family favorites during the 4th of July. The colored flames and sparks help light up the area on America’s birthday.

Backyard celebrations - You can’t have a barbecue without some backyard fun! Many people compete in backyard games while celebrating America’s independence (patriotic cornhole, anyone?). If the barbecue gets rained out, don’t worry—there are plenty of 4th of July games to play indoors, too. 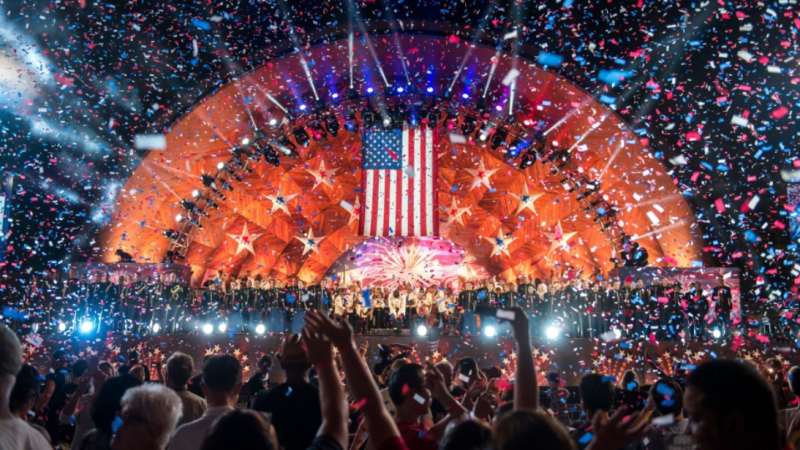 Confetti falls at the end of the Boston Pops Fireworks Spectacular in Boston on July 4, 2017. Credit: Nicholas Pfosi/Boston Globe via Getty

4th of July parades - The community gathers to march in the streets to celebrate Independence Day. You’ll see floats, music, and a whole lot of red, white, and blue! 4th of July parades can also be followed by festivals, carnivals, or fairs that provide yummy food, fun rides, and other family-friendly activities.

Creating patriotic crafts - This activity is perfect for the DIY-er looking to deck out their home for Independence Day or for kids at a barbecue. People love creating 4th of July crafts to honor America’s birthday, from flag-themed decorations to red, white, and blue pinwheels.

4th of July travel - Many Americans plan getaways to celebrate Independence Day. They tend to head to the lake or ocean, or go camping, to have some fun in honor of America. If you’re looking to plan a trip, you can’t go wrong with these 4th of July weekend getaways.

Shopping - Let freedom ring, and the savings begin! People love shopping 4th of July sales—and with great deals on items like mattresses, furniture, and appliances, they’ll save some serious cash.

The 4th of July is a holiday Americans hold near and dear to their hearts. It marks the day America became the country it is today—a country where people have a right to life, liberty, and the pursuit of happiness. On this day, we remember the United States’ fight for freedom and celebrate our country with friends, family, food, and fun. 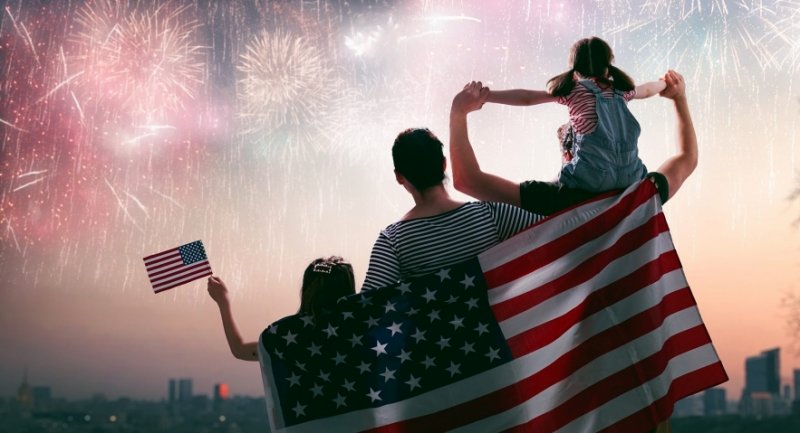 Fourth of July: Top places to enjoys fireworks and parades

After a pandemic-induced hiatus last year, many places in the United States known for their Fourth of July celebrations will be back in action for 2021.

And the highlight of many of those celebrations? An awe-inspiring display of fireworks, of course. Those who can't make the trips to enjoy the shows in person can catch many of them on live streams and TV broadcasts.

From our biggest population centers to smaller cities and towns, CNN Travel has rounded up some of the top places across America to enjoy Fourth of July fireworks and when to go (all times are local).

Saturday, July 3 | Addison Kaboom Town! This Dallas County town has a population of about 15,300, but it puts on a show that is supposed to impress any "bigger is better" Texan.

While tickets for the celebration in Addison Park Circle are sold out, restaurants and hotels still have watch-party packages. The town will have a live stream on its YouTube channel. A "Freedom Flyover" patriotic airshow starts at 7:30 p.m., and the fireworks start at 9:30 p.m.

Sunday, July 4 | Thunder on the Mountain: Alabama's biggest city puts on a memorable fireworks display against the backdrop of the colossal Vulcan, the world's largest cast iron statue.

Vulcan Park and Museum will close at 6 p.m. to prepare for the show. VisitVulcan.com says prime viewing locations include Five Points South, Homewood, Vestavia, Mountain Brook and the UAB campus. The 9 p.m. show will be televised.

Sunday, July 4 | Fireworks and Pops Concert: This annual event is beloved not only in Boston but across New England. In 2021, the fireworks and the concert will be held in different locations.

The fireworks portion stays in Beantown, with a show at Boston Common starting at 10:30 p.m. Meanwhile, the Boston Pops Independence Day concert will be held at Tanglewood in Western Massachusetts. Tickets are sold out, but will be broadcast from 8 to 11 p.m. 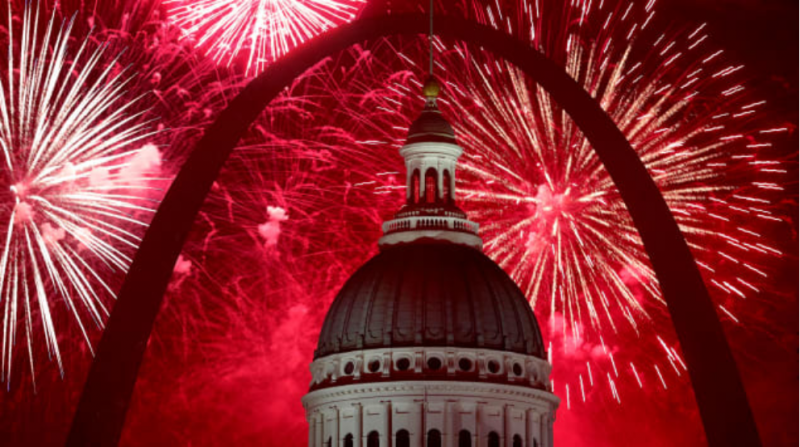 Fireworks light up the night sky over the Gateway Arch and Old Courthouse as part of an Independence Day celebration in 2019. Jeff Roberson/AP 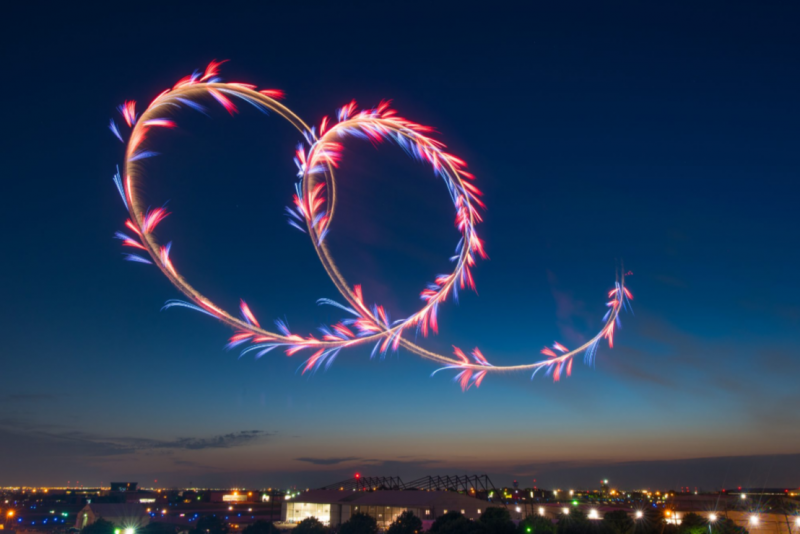 Sunday, July 4 | Celebrating American Independence: People from Minneapolis and Des Moines who want some small-town Independence Day charm without giving up a big show can head to little Clear Lake.

This town of about 7,600 is serious about marking American independence. Events stretch out from Wednesday, June 30, to Monday, July. 5. The topper -- Clear Lake's renowned fireworks shows -- starts at 10 p.m.

Sunday, July 4 | 4th of July Spectacular: Wouldn't it be nice to listen to the Beach Boys before watching fireworks shot over balmy ocean waters? People in Fort Lauderdale will be able to do both this year.

The Beach Boys perform live from 7:30 to 9 p.m., and the seaside fireworks show starts immediately afterward. You can even take water taxis to the event.

Sunday, July 4 | Las Vegas Strip Fireworks: So much of Vegas is literally a gamble, but it's a pretty safe bet that Vegas will put on a dazzling fireworks show.

In fact, there will be various shows and events all over the area. But the biggest display will be on the Strip at 11 p.m., when fireworks will be shot off simultaneously from the rooftops of Caesars Palace, The Aria, Planet Hollywood, Treasure Island, The Venetian, The STRAT and the new Resorts World.

Sunday, July 4 | Let Freedom Sing! The capital of Tennessee and of country music aims to deliver big in 2021: Country superstars and the largest fireworks show in the booming city's history.

Brad Paisley is the headliner for the musical festivities. The entertainment starts at 4 p.m., and Paisley is set to take stage a little after 8 p.m.

The fireworks show, accompanied by the Nashville Symphony, is slated to start at 9:30 p.m. The city plans four major firing areas downtown to cover more space over the scenic Cumberland River.

Sunday, July 4 | Macy's 4th of July Fireworks Spectacular: The folks at Macy's don't rest their laurels on the Thanksgiving Parade. For summer, they put on the largest fireworks show in the nation.

Macy's says it has worked to provide up to two miles of public viewing space for the free show. Live broadcast coverage of entertainment -- including Reba McEntire and Black Pumas -- starts at 8 p.m. Around 9:45 p.m., fireworks will be shot from barges in the East River. 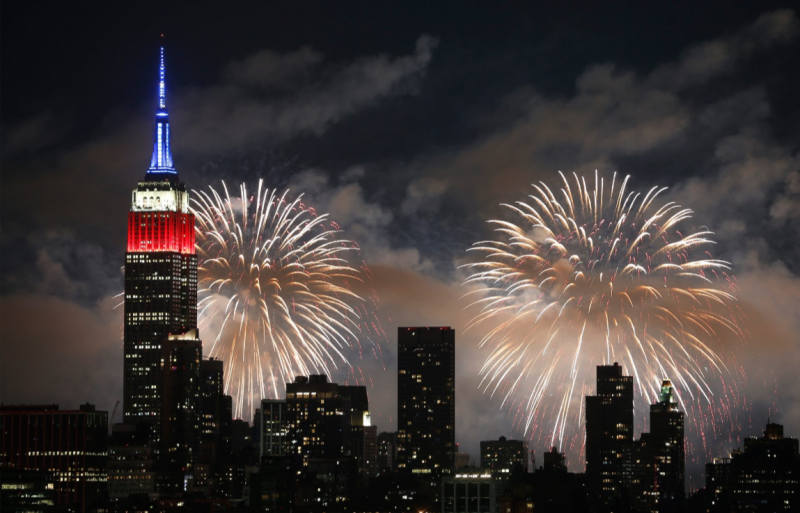 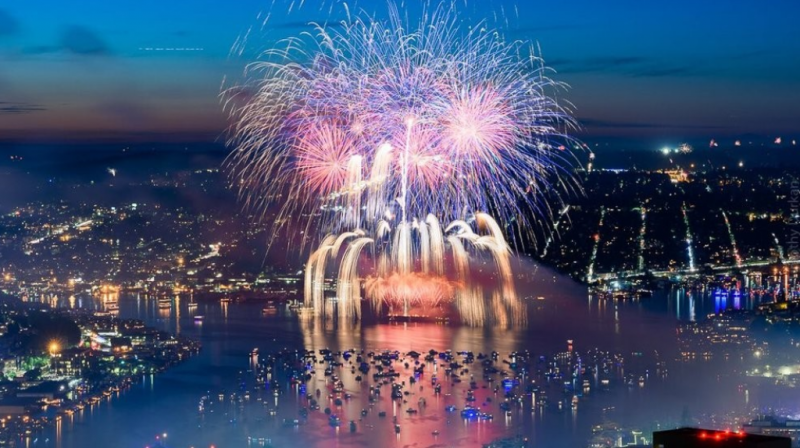 Sunday, July 4 | AmericaFest: Held at the iconic Rose Bowl, the in-person show is back after going virtual last year. The theme for 2021 is "Celebrating America's Perseverance."

The gates open at 5:30 p.m. with motocross shows scheduled for 6:30 and 8 p.m. The fireworks are set to go off at 9 p.m. This is a paid event, but areas around the stadium can provide fireworks views.

Sunday, July 4 | Wawa Welcome America: The city where the whole independence thing was made official goes large for this holiday, with 16 days of events that started on Juneteenth.

The concert begins at 7 p.m. It culminates at 9:30 p.m. with a fireworks display over the Philadelphia Museum of Art. People who want to watch the show from the Benjamin Franklin Parkway can begin arriving at 8 p.m. in the area between Eakins Oval and Logan Circle.

Sunday, July 4 | Big Bay Boom: Southern Californians have good options for fireworks shows. Those around San Diego get the treat of Big Bay Boom, during which fireworks are set off from four barges in San Diego Bay.

Suggested viewing locations are Coronado Ferry Landing, Harbor Island. Shelter Island, the Marina District and North Embarcadero. And then anyone with a boat has great viewing options. The fireworks start at 9 p.m. and will broadcast live on several outlets in California. 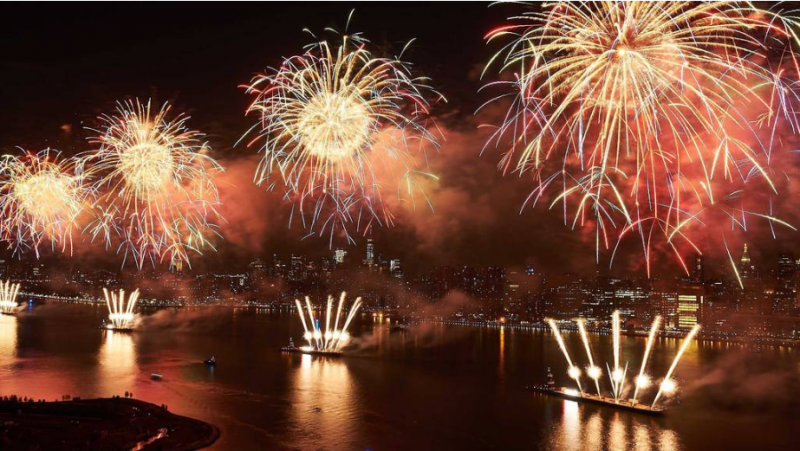 Sunday, July 4 | Fourth of July Fireworks Spectacular: Missouri's largest city has an enviable backdrop for a fireworks show: the Gateway Arch and the mighty Mississippi River.

Fair Saint Louis says it's going to be the largest July 4 fireworks it has ever produced. The show will start at about 9:40 p.m. Fair Saint Louis said it hopes "spectators will enjoy the fireworks show wherever they can safely view it, including by streaming live at home with their families or by watching from downtown restaurants and hotels in support of local businesses."

Sunday, July 4 | A Capitol Fourth and July 4th Fireworks: No roundup of July 4th celebrations and fireworks shows is complete without an entry from the nation's capital.

The 41st annual Capitol Fourth concert, hosted by Vanessa Williams, will be broadcast on PBS, though it will be recorded this year out of pandemic precautions. It starts at 8 p.m.

As for the fireworks, they're set to be launched at 9:09 p.m. from both sides of the Lincoln Memorial Reflecting Pool.

INDEPENDENCE DAY BY THE NUMBERS

2.5 million – the estimated number of people living in the newly independent nation in 1776.

56 – the number of signers of the Declaration of Independence.

70 – the age of the oldest of the signers, Benjamin Franklin.

$302.7 million – the annual dollar value of shipments of fabricated flags, banners, and similar emblems by the country’s manufacturers.

1 in 4 – the number of people who will set off their own fireworks.

150 million – the number of wieners consumed on the holiday nationwide.