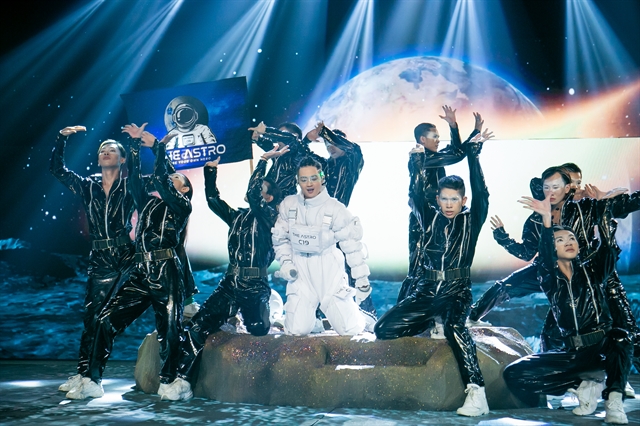 Thanh Duy won audience's heart and the show judges after he sang his song Magic at The Heroes. Photo saostar.vn

Viet Nam Idol 2007’s second-place finisher Thanh Duy is one of the veteran participants of the music reality TV show The Heroes this year. For the past two years, Duy struggled with his mental health and could not make any music.

What made you decide to join The Heroes?

I haven't been active in music for a long time due to a lack of inspiration. For the past two years, I was not open but then I listened to myself and began to write my first notes.

I compose to ease the pain by expressing inner thoughts that are difficult to speak. When I wrote a few songs and was seeking a way to release them, I received an invitation to the show.

Right on time, I accepted the invitation to join the show. I’m glad to be with many young singers. I feel younger by performing with them on the stage.

I love music and this show is an opportunity for me to introduce my new image. Every competition has its own pressure and I don't like to compete. I just want to sing the way I want.

When the competition began to be fierce, the judges said that I was old and I should change to fit with the younger contenders. But honestly, I can't. I want to keep the style that represents my generation.

I don't see The Heroes as a contest but a music garden letting each singer show off their own colours.

What was holding you back?

I think my problem is due to psychological factors. Every day for me is like fighting an inner saboteur. He is a different version of me, opposite to my positive and optimistic version.

He made me read, accept and believe the bad things that people said about me. He denied all my efforts and I felt I was not good enough and not worthy of what I had achieved.

There is such a person inside me always putting me in emotional disorder. It made me sleepless and exhausted.

What did you do to get over it?

I started meditating. I began with breathing which is the simplest and the most important thing that connects me and life. Focusing on each breath helps me forget negative thoughts.

How would you describe your music?

It's really hard for me to find a suitable path because I always change. I can sing many genres. My favourites include African and Swedish music.

I've never composed before so I have to ask a musician to help me to orchestrate. It is not easy to edit an arrangement. For years, I was waiting for a hit but it failed. I don't have much money or relationships.

How has the pandemic affected you? How are you dealing with it?

I watch many documentaries about the environment such as Planet Earth, Moving Art and Life on Earth.  I also watch again good movies that make me feel good about things even though I am still at home and social distancing in HCM City.

Currently, I have to live on my savings. The pandemic impacts art. I don’t have shows. But that's okay, thanks to that I discovered my ability to write music. The saying, "one door closes, another opens" is true for me.

You are not only a singer but also an actor and MC. Which has brought you the most success?

After Viet Nam Idol, I sang like a machine. I was managed by a company and I even could not make decisions about my music.

I had to say goodbye to the company. I had to earn money to invest in my music from other jobs. I don’t think I am a professional MC.

I am invited to host events because organisers see my humour and entertaining nature. My roles in films also earn me some rewards.

However, I think that I am popular due to my singing. Although I have not had a hit, I’m the most confident with music.

Are you excited to appear in The Heroes? How do you plan to compete?

I don’t plan to compete with others. I just want to know how I will confront myself in music. I have spent a lot of time listening to music and thinking about what I like the most in music and who I am in music.

I’m excited to introduce my music to the audience at the show. — VNS