Two heavyweights go head-to-head as Belgium take on Italy in Munich. In the article below, we update preview, predictions, team news, betting tips and odds of the match.

It is Belgium vs. Italy at Allianz Arena, in the derby of the EURO 2020 quarterfinals. The two powerhouses come into this match filled with confidence after winning all the contests in the previous part of the tournament. However, the Italians did have to go through extra times against Austria but avoided a penalty shootout defeating the rivals before the 120th minute. On the other side, Belgium eliminated the reigning European champions, Portugal, in the Round of 16. According to many, these two sides are in the best form of all the remaining teams in the championship. 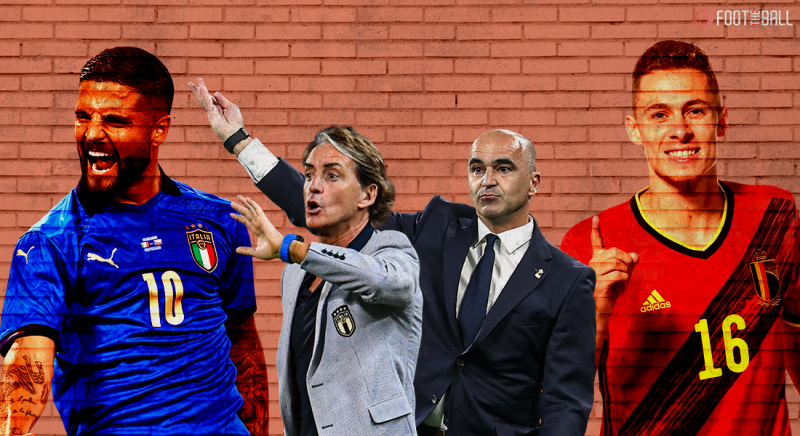 Belgium (+280) suffered a massive beating against Portugal. The rivals wanted to hurt the Red Devils’ players, especially De Bruyne, whom they eliminated in the second half, and Hazard. We also want to say that what we saw from Selecao is a disgrace for football.

But to get back to Belgium’s performance. They could have scored the second goal in the finish if it weren’t for some odd decisions from Thorgan Hazard, who didn’t pass the ball to his teammates on several occasions.

Overall, this is the 13th straight match for the Red Devils without losing and the fifth consecutive win. Their backline allowed just one goal during that stretch which is amazing.

Italy (+100) didn’t shine against Austria in the round of 16 as they did in the group stage. Azzurri had to go through overtime to take down the courageous neighbors. It was 2-1 for Mancini’s side, which allowed a goal following 11 straight games without one. Some suggest that it took place in the extra times and that it won’t count, be we will.

This was the 31st match in a row for this unit without a defeat, but an 11th consecutive win. When looking at these stats, the Italians are by far the team with the best form on EURO 2020.

The heroes against Austria were the youngsters – Federico Chiesa and Matteo Pessina, the guy who shouldn’t even be here, as he wasn’t Mancini’s original pick for the EURO squad. However, he ended up on the roster following certain injuries.

Eden Hazard reportedly finished his EURO 2020 participation, the latest tests reveal. Dirty plays from the Portuguese team took a toll in the end. The latest sources are suggesting that Kevin De Bruyne won’t be able to play to against Italy.

Giorgio Chiellini will be ready for this match, the Italian sources claim. Alessandro Florenzi‘s state is still doubtful.

Without De Bruyne and Hazard, Belgium’s prospects for the next stage are pretty slim, However, we simply can’t bet against them because they have Romelu Lukaku who is a massive advantage upfront. Inter’s superstar knows all of the opponents very well, and he could be and X-factor on the field. Our suggestion here would be under 2.5 goals, with the odds on that -195.

When these two countries last locked horns, at Euro 2016, under 2.5 goals were produced as Italy claimed a 2-0 win. Four of Belgium's last six international matches have witnessed fewer than three goals being scored and we all know how strong that Italian defence is. Roberto Mancini's men finally conceded a goal for the first time in 12 matches during their game against Austria but even then, they kept a clean sheet during the initial 90-minutes.

Four of the 11 meetings between Belgium and Italy have ended in stalemates and we backing the pair to cancel one another out in the opening 90-minutes of Friday's clash. Belgium are unbeaten in their last 13 matches while Italy haven't lost any of their last 31 fixtures, so you can see just why we're backing a draw between the pair.

Italy have won three of their last four encounters with Belgium, beating the Red Devils in the group stage of Euro 2016 and Euro 2000, and have the added experience of being one of the few countries to have won this competition on multiple occasions. Many pundits believe that this Euros and the World Cup in Qatar are the final chances for their ‘Golden Generation' to finally win a trophy, something that only adds pressure onto the player's shoulders.

Belgium and Italy met in the group stage of the previous EURO, held in France in 2016. Azzurri won that game 2-0. Giaccherini and Pelle scored both goals, but the man of the match was Leonardo Bonucci.

Today, 11:04
Phuong Uyen Tran Everyone Has a Home to Turn to in Difficult Times