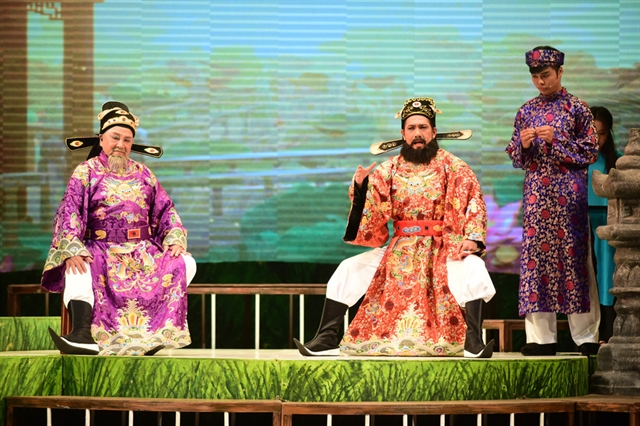 Songs and plays in praise of the country and patriotism will be featured in videos during the selection round for Chuong Vang Vọng Cổ (Golden Bell), the national traditional music contest for cải lương artists launched by HCM City Television this month. Photo courtesy of the organiser

Vietnamese aged 16 to 35 are encouraged to apply for the contest via the website www.htv.com.vn and https://www.facebook.com/ChuongVangVongCo.HTV/.

The selection round will close on July 25.

Each candidate should send two videos featuring his or her voice and performance in two vọng cổ (nostalgic tunes) songs or one extract from a cải lương play to the organiser.

Works in praise of the country and patriotism are encouraged.

Thirty-six candidates will be selected to compete in the semi-final round, which is scheduled in August in HCM City. They will work with skilled performers to compete to enter the final round in September.

Ten finalists will compete for different prizes, including the Golden Bell first prize worth VNĐ100 million (US$4,300) in cash, Silver Bell prize worth VNĐ50 million ($2,150), and Favourite Performer and Youngest Talent prizes.

Their performances will air live on HTV9 channel to  millions of viewers around the country. Viewers will vote for the winners.

“The Golden Bell contest began in 2006 and has discovered and encouraged new talents in theatre. Many winners have become professional artists working for leading traditional art troupes in the region,” said Trần Hiền Phương, a member of the contest’s organising board.

“This year's contest is being launched online because the COVID-19 pandemic is still spreading. We hope audiences will support our candidates during the contest.”

Nguyễn Quốc Nhựt of Long An Province won the Golden Bell first prize. His strong voice and performance in Kiều Nguyet Nga (Story of Kiều Nguyet Nga), a play about love, bravery and southern women in the 19th century, left a strong impression on the judges and audiences. He received the highest score of 99.79 from the judges.  VNS