New Zealand’s Ambassador to Vietnam Tredene Dobson definitely looked the part during the presentation of her credentials to the Vietnamese President Nguyen Xuan Phuc on Wednesday.

According to the New Zealand Embassy in Hanoi, presenting credentials is a special occasion for any ambassador, and ambassador Dobson chose to do it her own way: wearing an ao dai, the traditional Vietnamese costume. 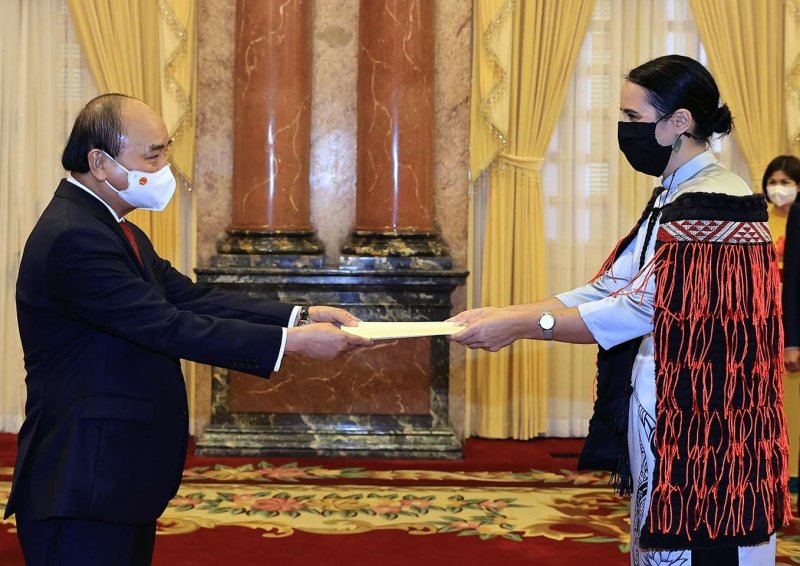 “This was extra special for ambassador Dobson because she was able to wear a beautiful collaboration between New Zealand and Vietnamese artists,” the embassy wrote on its verified Facebook page the same day, adding that this was the ambassador’s first experience wearing ao dai.

The outfit was created by Vietnamese designer Quyen Nguyen and painted by Kiwi artist RaeRae Hemara, an arts student living in Whangarei, as a representation of the connectivity between the two countries.

Dobson’s ao dai depicted New Zealand’s Mount Manaia as well as Vietnam’s national flower, the lotus, in the hope of representing a connection between both her country and Vietnam as well as herself, a proud member of New Zealand’s indigenous Māori people.

Ambassador Dobson’s Wednesday outfit was completed with a korowai, a traditional Māori cloak.

“Wearing this beautiful piece of art - this collaboration between two amazing young female artists, one in New Zealand and one in Vietnam - it just makes me feel incredibly proud [sic],” the New Zealand Embassy in Hanoi’s Facebook page quoted Dobson.

“It is a privilege to serve as New Zealand’s Ambassador to Vietnam, and wearing my ao dai with its stunning Māori design and korowai today – genuinely connects me to these two incredible countries,” Ambassador Dobson shared.