The coral summer sky over Hue Imperial City in Vietnam casts an auburn reflection off Tinh Tam Lake, where the light smell of lotus floats through the air, reminding visitors of the tranquillity of times past.

What visitors cannot see or smell, however, was one woman’s struggle to find and revive four varieties of royal lotus that many had once thought to be extinct.

King Thieu Tri (1807 – 1847) once listed Tinh Tam Lake amongst the citadel’s top 20 sites thanks to the beauty of the lotus blossoms which float atop its surface. But Tinh Tam Lake no longer holds the magnificence it once had now that decades of neglect have left its three islets, once the royal gardens, abandoned and awash with garbage.

According to Le Cong Son, chief of office of the Hue Monuments Conservation Center in Thua Thien-Hue Province, the combination of mud and sand which line the lakebed made it the ideal site for a lotus garden until the lake became inundated with sewage.

About a year ago, Hue approached the Hue Monuments Conservation Center with a proposal to fill Tinh Tam Lake with white lotus sourced from Ha Sen Lake in Hue’s Phuoc Tich Ancient Village.

Ha Sen itself had once be laid bare of its lotus until Hue piloted a program which packed the lake with lotus seeds propagated by the center.

It took Hue and her colleagues several months to clean Tinh Tam Lake and revitalize the lakebed by nursing it with probiotics and organic fertilizers. Their hard work has paid off.

“It's wonderful to track the growth of our lotus," she said.

"Seeing them bloom on the lake’s surface filled me with joy."

Hue and her team now use the lake’s Bong Lai Islet as the headquarters of a lotus operation which mixes tea and lotus pistils and packs them in lotus flowers.

The lotus flowers are then vacuum-packed and can be frozen for up to six months. 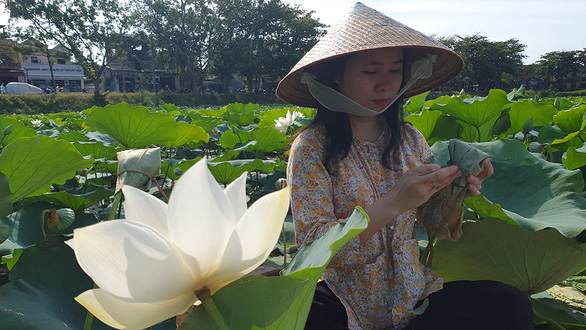 According to Son, white lotus flowers once blossomed in all the imperial city’s lakes.

In order to revive that unique landscape, the center launched a research initiative in 2007 focused on reviving Hue’s four indigenous varieties of lotus.

Starting the project proved to be difficult and complicated.

At the time, only a few pagodas in the city still grow white lotus which originated in Hue.

A breakthrough for the project occurred when Son connected with a farmer who specialized in lotus flowers.

“He told us of an old pagoda in Thuy Duong Commune which had two kinds of white lotus that had been brought from the imperial city,” said Son.

The pagoda was an important piece of the puzzle for him and his team, but there still remained one major obstacle.

“We were able to find three of the four lotus varieties we were looking for, but we couldn’t find the fourth no matter how hard we tried,” he said.

It turns out that the last variety was hiding right under his nose.

In a stunning twist of events, a worker cleaning out Dai Lake in front of the mausoleum of King Gia Long (1762 – 1820), the founder of the Nguyen Dynasty, discovered a large white lotus hidden in a thick layer of bushes.

“It was a strange variety of lotus, so we decided to photograph the flower so that we could compare it with illustrations and ask gardening experts for advice," Son said.

"They told us it was the exact variety we were looking for."

Son’s research also found that this particular variety of white lotus flowers can only grow in a highly nutritious and clean environment with freely flowing water.

In order to propagate royal white lotus, the center dredged Dien Lake in front of Voi Re Palace and another lake in Van Thanh Relics to nurture these flowers.

They have plans to grow these plants in lakes and ponds throughout the imperial city and relics related to the Nguyen Dynasty. 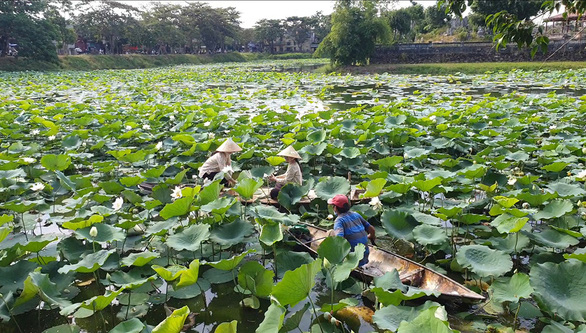 According to Hue, although these flowers are hard to cultivate, their fragrance is extraordinary.

“They melt easily in your mouth and have a special aftertaste.

“We restore white lotus flowers in Tinh Tam Lake out of branding, not for profit.

“It’s for the pure happiness of finding their lost beauty.”