Lau mam, or fermented fish hotpot, can be described as a truly communal experience of the bountiful lands of U Minh National Park in Vietnam’s southernmost province of Ca Mau – for boisterous drinking sessions with friends and families, and for the indelible smell that can send a sharp sensory signal to nearby neighbors.

Hotpot, or 'lau' as it is known in Vietnam, is loved throughout the country thanks to the bonding experience it provides diners.

Typically, a hotpot in Vietnam consists of a pot of boiling broth placed on the table to cook meat, vegetables, and other side dishes.

The dish is universally cherished throughout Vietnam, generating scores of variations that leverage the delicacies of each locale. 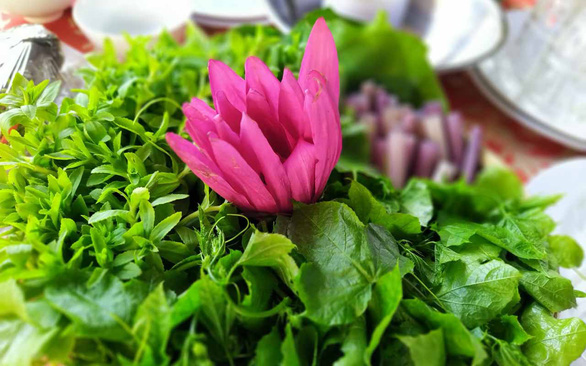 Flowers and vegetables are served on the side of a hotpot in Vietnam's Mekong Delta. Photo: Tien Trinh / Tuoi Tre

Tourists coming to the U Minh area will find every suggestion leading to lau mam, a hotpot version that enjoys wild popularity in Mekong Delta cuisine.

The ingredient is indicated as a local pride, even an integral part of the U Minh identity. 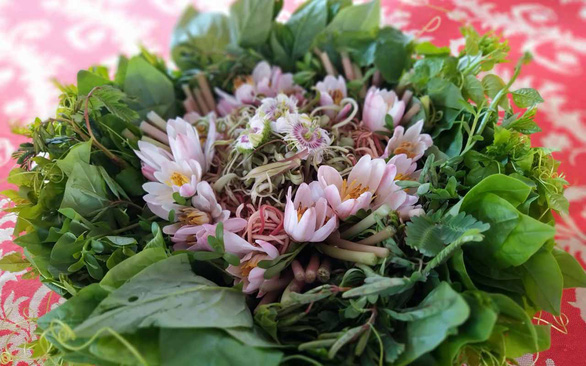 Flowers and vegetables are served on the side of a hotpot in Vietnam's Mekong Delta. Photo: Tien Trinh / Tuoi Tre

The dish calls for a specific kind of mam made from sac buom, a freshwater fish that abounds in local canals and reservoirs.

When diluted into the hotpot stock, a spoonful of mam sac buom is enough to emanate a pungent smell, infusing the dish with its very soul.

After the fish meat disintegrates and the bones are removed, the broth gets mixed with chopped lemongrass and spice to taste.

The smell manages to pull in not only diners, but also mosquitoes, which usually come in droves and force the meal to be enjoyed in sealed mosquito nets.

As locals see it, the eccentricities only add to the whole experience; the dish is deemed a failure if it cannot blanket the whole neighborhood with its sickly, sweet smell. 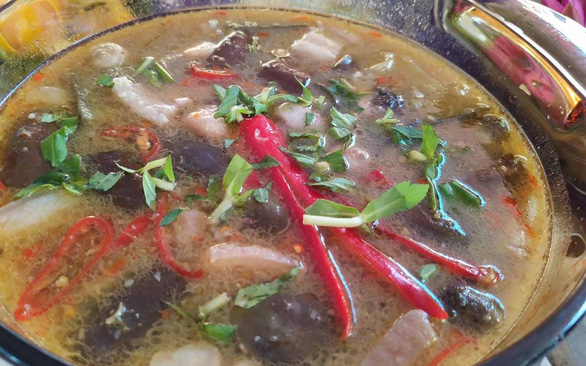 Nevertheless, the broth is only about half of the work that goes into lau mam – the remainder being the preparation of a wide range of meat and vegetables that diners can cook in the stock.

During a lau mam meal, the selection of vegetables would usually be anything the host has at hand, for the U Minh forests bless them with countless of tropical flavors including morning glory, bitter herbs, pumpkin buds, okra, floating enhydra, pepper elder, water lilies, and others that manage to catch the eye of diners before they even get a first taste.

The flavor palate is elevated even higher when local specialties of wild-caught fish, snails, and eels are added to the steaming hotpot, introducing unmatched textures and umami flavors.