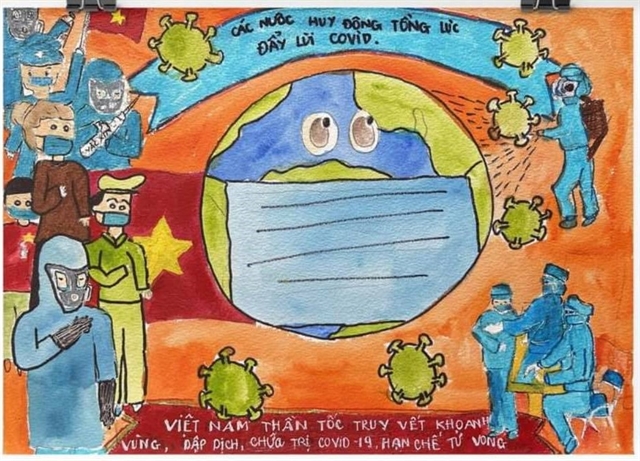 Painting entitled Viet Nam Joins Other Countries in the Fight Against COVID-19 by 11-year-old Nguyễn Ha Minh Anh. Photo courtesy of the painter

Artworks painted by children during the pandemic are being displayed in an online exhibition.

The outbreak of the fourth wave of COVID-19 since late April has forced the annual exhibition, entitled Be Vẽ Ha Noi (Children Paint Ha Noi), from Urban Sketchers Ha Noi to be held online in the organisation's Facebook group, instead of at the Viet Nam National Museum of History as planned.

Starting from June 1, the event features 80 works by 24 children aged from four to 13. The paintings were selected by the organisers among many entries created within the past year. 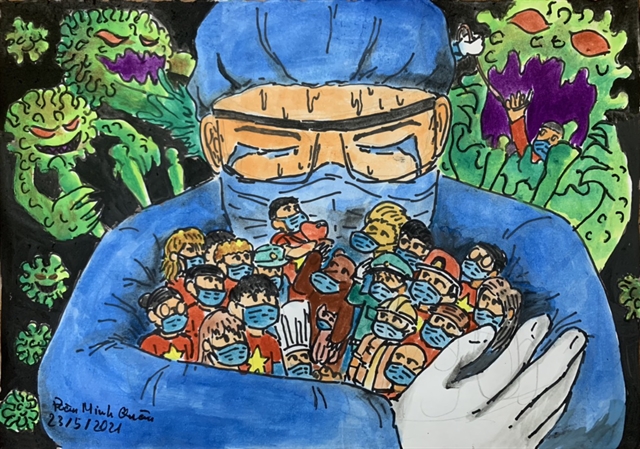 According to architect Trần Thị Thanh Thủy, the head of Urban Sketchers Ha Noi and also one of the organisers, Children Paint Ha Noi aims to inspire children’s love for beauty, for their hometown and the world to increase their awareness of the need to preserve and appreciate national tangible and intangible values.

Another difference for this year's event is the extension of the number of topics.

“In addition to the works completed in live sessions portraying life, culture, people and street food of the capital, the participating children also expressed their gratitude to medical staff, the unsung heroes on the front line, via their paintings,” Thủy told Viet Nam News.

“Creative topics have been expanded, including pandemic prevention measures and humanity during the pandemic. Particularly, the lives of the children during the pandemic have been the inspiration for many of their artworks like those painting the windows or the scenes inside their houses. This topic has been constantly updated and enriched with new works.

“In the context of the complicated situation of the pandemic, the exhibition also aims to encourage medical staff on the front line as well as all Vietnamese people in the fight against the COVID-19 by reflecting children’s desire for a happy, safe normal life and ability to paint the streets of Ha Noi outdoors again,” Thủy said. 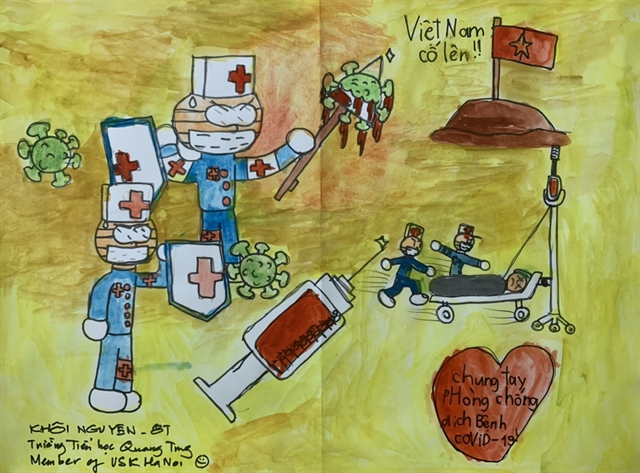 “This is also the year Urban Sketchers Ha Noi has welcomed the most new members to participate in our exhibition. Through the mass media, Facebook and newspapers, our group has become familiar to many people in the capital and attracted an increased number of people with a passion for painting over the years,” she added.

According to her, young artists who have joined Urban Sketchers Ha Noi in recent years have made great progress and matured not only in their drawing and colouring but also demonstrated deep thoughts towards the community like Nguyễn Ha Minh Anh, Hoang Ngọc Tram and Đặng Ngọc Minh Chau.

“I’m so proud of them who will become the extension and future of Urban Sketchers Ha Noi," Thủy said. 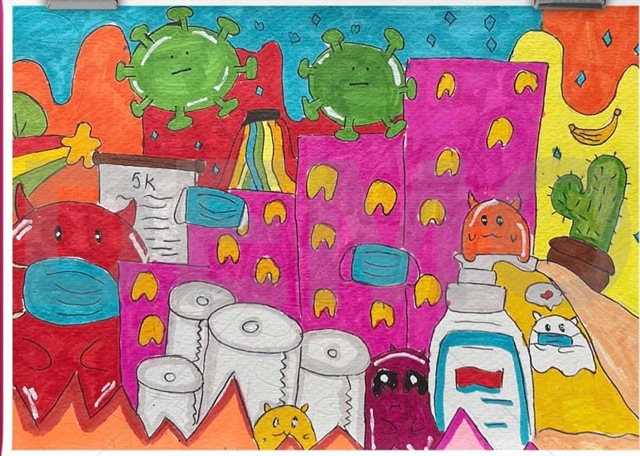 Every story in Ha Noi these days seems to revolve around COVID and children have done their best to adapt.

For example, Minh Anh was allowed to paint freely on three pieces of wall of up to 30sq.m, Tất Khanh took the time to study art history, art schools and renowned painters, while Khoi Nguyen closely followed the pandemic information situation to create vivid and impressive paintings on pandemic prevention measures and humanity.

“That's how the kids of Urban Sketchers Ha Noi are like. Each girl and boy has an unmistakable personality but shares the same love of sketching and art. Each child is a highlight in the harmonious and beautiful picture of the Urban Sketchers family,” Thủy said.

Like other children, Minh Anh, 11, has spent most of her summer holiday completing her paintings.

Minh Anh has 13 paintings exhibited in Children Paint Ha Noi this year, all of which have been paintings both indoors and outdoors. The major theme in her artworks is the spirit and efforts of the whole nation against the pandemic.

For example, in her paintings entitled Viet Nam Joins Other Countries in the Fight Against COVID-19, Minh Anh wishes to remind people to strictly abide by the Ministry of Health’s pandemic prevention guidelines and unite with the government’s efforts to battle the virus.

“I hope that countries around the world urgently join the fight against the pandemic. I also want to send a message to all Vietnamese people, wishing that they would be dedicated to the sake of themselves and the country by avoiding mass gatherings in public and take appropriate actions to their age and ability like supporting necessities to people in need the front line or painting to promote the pandemic fighting spirit,” Minh Anh said.

Paintings of Be Vẽ Ha Noi can be seen on the Urban Sketchers Ha Noi Facebook group. The exhibition will run until June 15.

Established in 2016 with nearly 4,000 members, the Urban Sketchers Ha Noi group has hosted various painting events focusing on images of Ha Noi, especially the old lifestyles and buildings, which are gradually disappearing in the process of urbanisation.

In August 2019, the group was recognised for its activities in the category of Actions for Ha Noi in the system of the Bui Xuan Phai – For the Love of Ha Noi Awards hosted by the Vietnam News Agency's Thể Thao & Văn Hóa (Sports and Culture) daily. VNS