A month-long program initiated by the French Institute in Hanoi – L'Espace, Photo Hanoi ’21 aims to celebrate diverse practices in making and displaying photographs from Vietnam, France, and beyond.

Throughout the month of May, Photo Hanoi ’21 brings a series of exhibitions, talks, and workshops to several cultural centers in the capital city, such as the Matca Photography Space, Lai Xa Photography Village, and the the Vincom Center for Contemporary Art (VCCA).

Developed during a time of prolonged travel restrictions, the program brings home yearning meditations of country and identity from Vietnamese photographers around the world, while also introducing fresh perspectives from lensmen and artists in Europe. 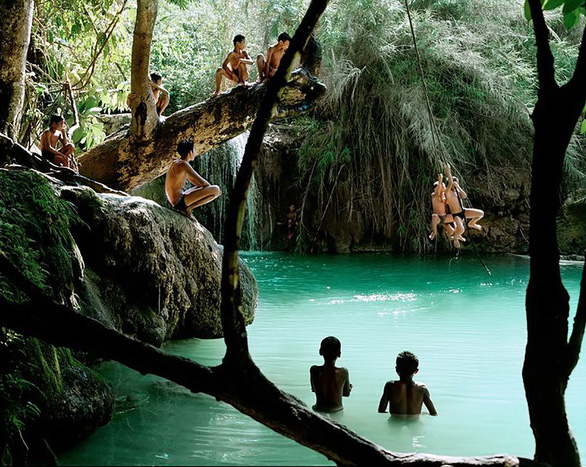 A shot by Lan Duc Hien is on display at ‘The Mekong – Stories of Man’ exhibition at L'Espace in Hanoi, Vietnam.

The centerpiece of the series, the ‘The Mekong – Stories of Man’ exhibtion is running at L'Espace and will last until June 12.

It showcases the works of French-Vietnamese photographer Lam Duc Hien during his journey to reconcile with the Mekong River, where he was born and raised.

Hien traveled the Mekong River on a 4,200-kilometer stretch, following its waters from the bustling River of Nine Dragons delta in Vietnam all the way to its source in the snow-covered Tibetan plateau.

In the visual diary, Lam interweaves his personal story with that of the river’s current inhabitants. Here, the Mekong simultaneously connects lands, cultures, and people’s destinies.

The veteran photographer was born on the shores of the Mekong River in Pakse, Laos. He arrived in France in 1977 after spending two years in Thailand’s refugee camp.

He has testified to the consequences of the 20th and 21st century’s major conflicts on civilians around the world, including Romania, Russia, Bosnia, Chechnya, Rwanda, South Sudan, and above all in Iraq, which he has covered for over 25 years.

Hien is just one among various artists of Vietnamese origin who are featured in the program, a standout being Prune Phi, a cross-discipline artist contributing to the exhibition 'Format,' currently ongoing at the VCCA.

Being a quarter Vietnamese through her grandfather without inheriting much of his cultural identity, Phi mourned the loss of ancestor figures that carried the history of her lineage across temporal and spatial lengths. 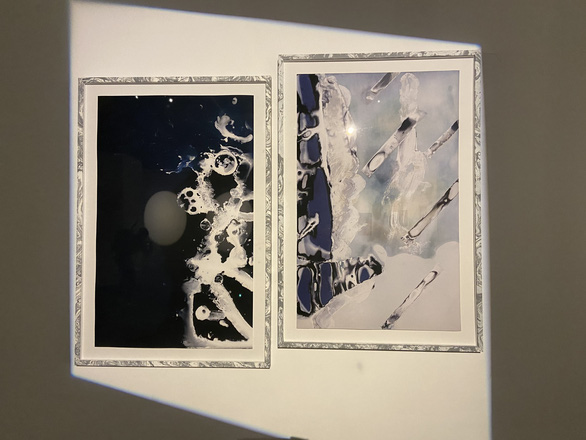 An exhibit by Tran Le Quynh Anh at the 'Format' exhibtion in the Vincom Center for Contemporary Art (VCCA) in Hanoi, Vietnam

Also delving into matters of Vietnamese identity, Swiss-Vietnamese artists Nguyen Thi My Lien ruminates on the cultural duality that she is made of in a selection of works for 'Unexpected Paths: Viewpoints from Europe,' another function of Photo Hanoi ’21 that takes place at the VCCA until June 12.

Growing up on the fine line between Vietnamese heritage and Swiss culture, Lien seeks to figure out unanswered questions about her family history through long talks with her mother and grandmother, while documenting with her camera bits and pieces of Vietnam that her ancestors brought to Europe decades ago.

The project is her gesture of recognition and gratitude to her family, but it is also her way to tell a deeply personal story about harmonizing Oriental and Occidental influences within the woman. 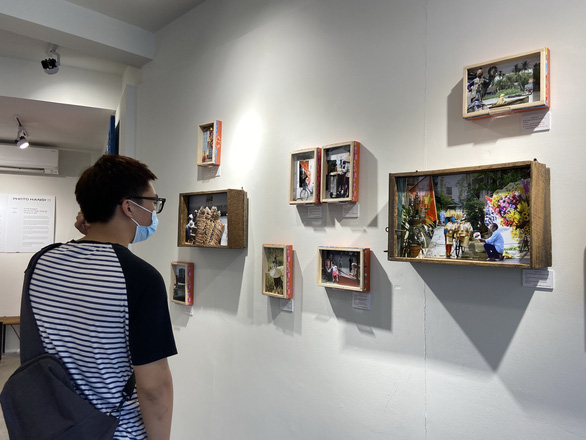 'Storybox' exhibits by Punk Dragon at their solo exhibition 'The Time Has Come to Rekindle the Stars' at the Matca Space for Photography in Hanoi, Vietnam

The time has come to rekindle the stars

Entitled 'The Time Has Come to Rekindle the Stars,' the exhibition is on display at the Matca Photography Space in Hanoi until the end of May. 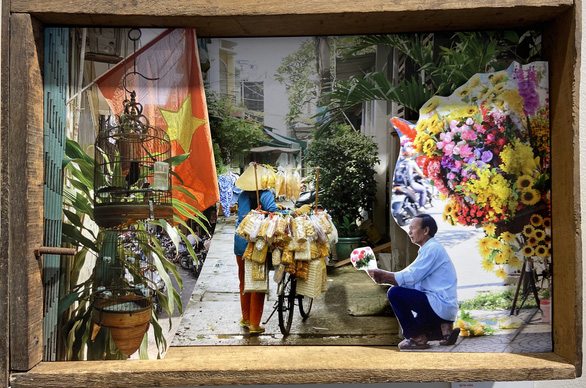 A 'Storybox' by Punk Dragon at their solo exhibition 'The Time Has Come to Rekindle the Stars' at the Matca Space for Photography in Hanoi, Vietnam.

For this exhibition, Punk Dragon chose the stars, the emblem of joy, destinations, and wandering dreams, also found on Vietnam’s national flag, as the running theme.

In their Storybox collection, everyday landscapes and stories of Vietnam are told through cut-outs and superposed pictures.

Each Storybox, entitled 'I come from…,'  unveil one’s own personal and emotional story through three-dimensional rendition of street life photos. 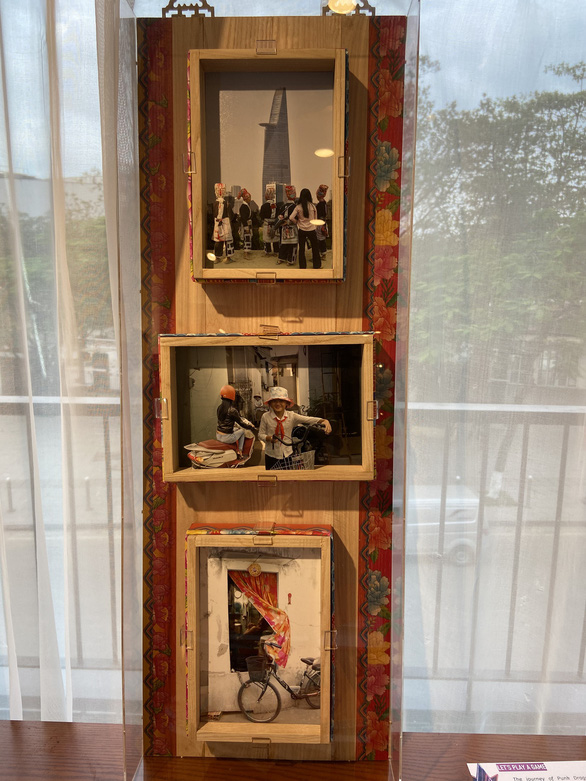 'Storybox' exhibits by Punk Dragon at their solo exhibition 'The Time Has Come to Rekindle the Stars' at the Matca Space for Photography in Hanoi, Vietnam

Echoing the sentiment, Yen Duong, a Vietnamese photojournalist currently based in Ho Chi Minh City whose works are featured at 'Format,' leans toward quiet moments in everyday life.

She is not afraid to challenge the established notion of image making, using darkroom techniques and black-and-white photos to reflect on her innermost thoughts. 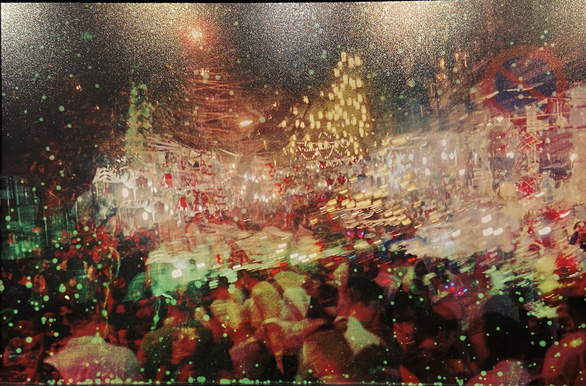 A shot by Nguyen Phuong at the 'Format' exhibtion at the Vincom Center for Contemporary Art (VCCA) in Hanoi, Vietnam

Through Photo Hanoi ’21, art aficionados are exposed to novel stories and angles highlighted by up-and-coming artists on the roster.

Pointing his camera to real estate ad displays on the street, Vietnamese artist Duy Phuong draws the attention of the Vietnamese people to the changes taking place within themselves and their surroundings.

Meanwhile, young photographer Duong gives the audience a glimpse into her lockdown days back in April 2020, where her inner landscape is vividly manifested through gleamy, exuberant shots.

European lensman Alexandre Garel showcases a majestic image of architecture in Vietnam, while Loes Heerink zooms into age-old trees in search of shapes and patterns.

“These projects, exhibitions, and workshops reveal the talent, skills, and unique vision of the artists, allowing the mere act of capturing to become a work of thought — that is the outcome of a thoughtful process.

"The Photo ‘21 project reminds us that there is an author behind every photo.”