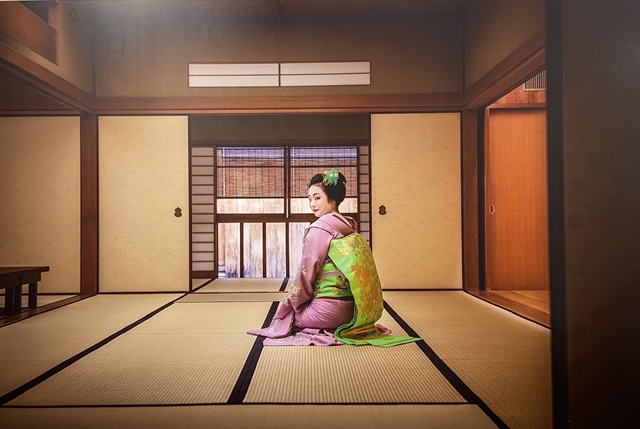 Together with geisha and geiko, maikos have been considered as symbol successors of the beauty of Japan. Photos courtesy of L'Espace

HÀ NỘI —  A photo collection depicting Japan’s apprentice geishas, known as a maiko, is on display in Ha Noi at the Japan Foundation Centre for Cultural Exchange in Viet Nam.

Entitled Secret Moments of Maikos, the exhibition offers visitors a glimpse into the hidden world of the young women, who are considered as symbols of the beauty of Japan, together with geishas and geikos.

Shot in the famous geisha district of Gion in Kyoto by French photographer Philippe Marinig, the images capture the grace and beauty of the women in this age-old profession. 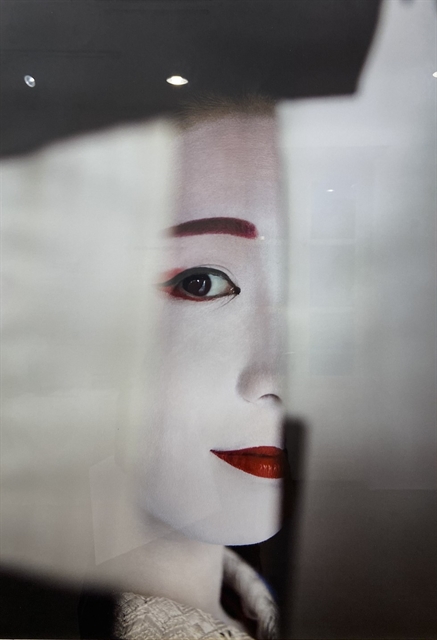 All the photos were shot in the famous geisha district of Gion in Kyoto.

Together with the photo collection, the exhibition also showcases a video by Marinig presenting a maiko who practises dancing in accordance with strict rules.

According to the website www.maiko-kyoto.jp, “Maiko is a ‘person of hospitality’. Hers is hard work, which doesn't only include serving drinks, but also entertaining guests with Japanese traditional performances, such as dances and shamisen play. The charms of Maiko are a beautiful dance, serving guests with the mindset of superior hospitality, always being elegant and splendid, as well as creating the ‘dream world detached from the daily life’ for a little while."

“Maiko aspires to the highest level of sophistication in the Japanese ‘hospitality businesses’,” it wrote. 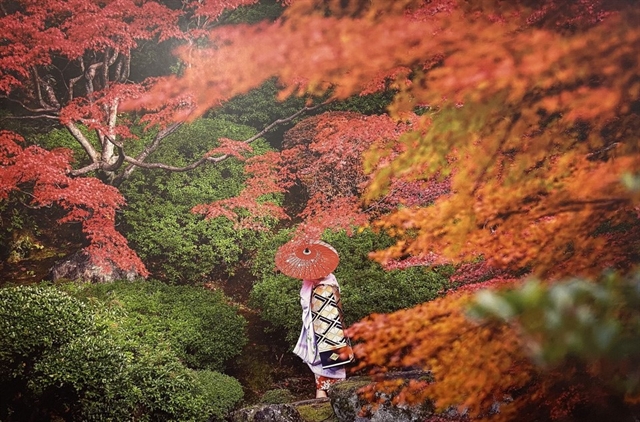 A photo depicts a maiko in the background of the red autumn leaves.

Photographer Marinig was born in Chateau-Arnoux in the Alpes de Haute Provence in 1962 in a family of artists and became interested in photography at a very young age. After training in Photographic Art with famous veteran photographer Denis Brihat, he studied photography in Boston in the US.

For more than 10 years, from 1992 to 2005, Marinig ran his own company, specialising in the processing of advertising and fashion shoots, in Cape Town, South Africa. Since 2006, he has devoted himself entirely to artistic projects that take him to southern Africa, Japan and Europe and which are the subject of numerous solo exhibitions. Maiko aspires to the highest level of sophistication in the Japanese ‘hospitality businesses’.

In 2010, he received the Scam Roger Pic prize, awarded by the Civil Society of Multimedia Authors.

The Secret Moments of Maikos is open to the public until June 2. The Japan Foundation is at 27 Quang Trung Street.

The exhibition is part of the month-long photography event Photo Hanoi ’21 initiated by the French Institute in Ha Noi, L'Espace, featuring 30 photographers, visual and creative artists from Viet Nam and abroad.

Through the photos and activities, Photo Hanoi ’21 tells stories as well as express diverse perspectives and approaches to the multi-coloured world prism of domestic and international photographers. VNS