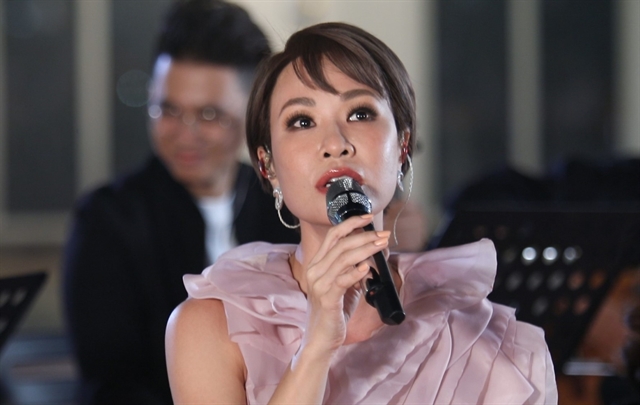 The video, featuring two lovers on a journey, was filmed on the Hải Van Pass and Sơn Tra Pennisula and the Dragon Bridge in Đa Nẵng City.

Unlike the pop version presented in the reality show, the music video, which was shot at the beginning of last month, was remixed in a jazz style.

“I hope, like a summer rain, the song can bring a fresh breeze to music lovers, especially in the context of the current hectic and full-of-worries life,” she said.

According to songwriter Hua Kim Tuyền, he just wrote down the tunes that he hummed in a dream.

“In my dream, with my girlfriend sitting behind, I drove a motorbike in a spacious and empty boulevard. Feeling happy in that context, I was humming a melody. At that point, I woke up and I needed to get up to write down the tune that still echoed in my mind," he said.

“It took me only 15 minutes to complete the song.”

The song was sent to Uyen Linh, who said she likes the melody immediately.

Although the singer planned to record the song last year, due to the outbreak of the COVID-19 pandemic, she said the time wasn't right to release the song.

Born in 1987, Uyen Linh graduated from the Academy of Foreign Affairs in 2010, the same year she won the third season of Vietnam Idol. Two years later, the singer released her debut album Giấc Mơ Toi (My Dream), following by the singles Chờ Người Nơi Ấy (Still Waiting for Him) in the same year, and Chiếc La Mua Đong (The Winter Leaves) in 2013.

Her other albums include Ưoc Sao Ta Chưa Gặp Nhau (I Wish We’ve Never Met) in 2014, and Portrait in 2017, which was nominated as Album of the Year at the Devotion Music Awards.

So far, the singer has been nominated for four Devotion Awards. VNS